HomeNewsPoliticsFollowing the Money Behind Opposition to Betsy DeVos for Education Secretary 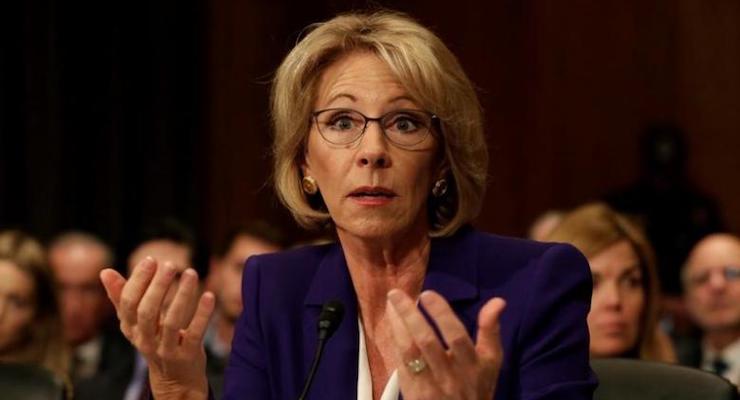 Democrats in the U.S. Senate spoke all night Monday in a last-ditch effort to filibuster and defeat the nomination of Betsy DeVos for secretary of education. With two Republican senators defecting, Democrats argued she was unqualified for the post and hoped to persuade just one more Republican.

School choice is overwhelmingly supported by the American people, including minority voters in the inner city. But the American Federation of Teachers, the nation’s largest teacher union and bankroll for the Democratic Party, opposes her nomination.

We decided to follow the money to let you decide for yourself whether opposition to Mrs. DeVos is really about her qualifications, or even the children for that matter, rather than special interest funding.

In 2016, the American Federation of Teachers spent $1,350,981 on special interest’s lobbying activity, alone. According to OpenSecrets.org, the organization as a lobby has a long history of ramping up spending after Republican victories, including the most ever spent in one year being in 2011. The Republicans had just wrested back control of the House of Representatives from a Democrat supermajority. That year, the AFT kicked out a record $1,471,065 for lobbying.

Of the $249,867 spent on committees, both via individual and PAC contributions, only $23,679 was spent on the Senate Committee on Health, Education, Labor and Pensions (HELP).

Last election cycle, the organization spent some $1,801,142 in individual contributions to Democratic lawmakers in D.C. juxtaposed to only $8,000 to Republicans. And what of those Republicans?

Well, it just so happens Sen. Lisa Murkowski of Alaska and Sen. Susan Collins of Maine, the two who announced they would vote against Mrs. DeVos, both are on the teacher union take.

Sen. Collins received an “A” grade from the National Educators Association (NEA) in 2008, the highest grade possible, which the group says was based on her voting record and “effective behind-the-scenes advocacy.” Sen. Murkowski was endorsed by the Alaska chapter of the NEA in her 2016 reelection campaign, a group that spent $2,734,000 on lobbying in the same year.

With the exception of Hillary Clinton and Bernie Sanders, Senate Minority Leader Chuck Schumer, D-N.Y., was also among their top recipients for donations in 2016.

Even as spending on education at the federal level has increased nearly 190% since 1970, scores have not showed dramatic improvement. While it’s certainly easy to chock up the money to an agreement on policy and ideology, the former doesn’t hold up to empirical data.

If the top priority of the unions and those who support them is the welfare of the children, then the chart above would be enough to convince anyone to change their mind.