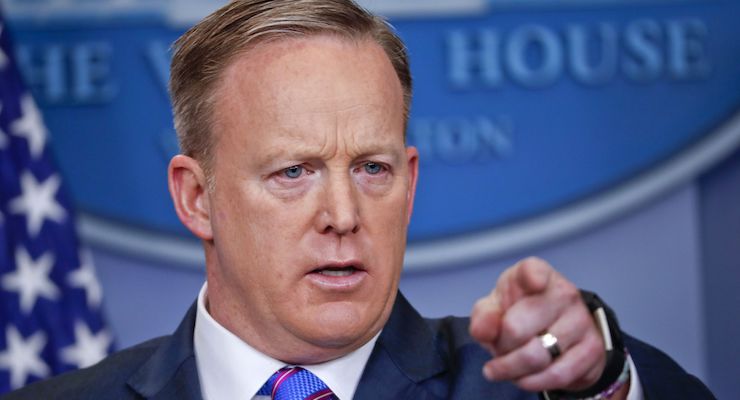 White House Press Secretary Sean Spicer said at a news conference Tuesday the firing of Michael Flynn as National Security Advisor came after an gradual “erosion of that trust.” He said President Donald J. Trump was told in late January that Lt. Gen. Flynn had misled Vice President Mike Pence relating to calls he had with a Russian ambassador.

“This was an act of trust — whether or not he misled the vice president was the issue and that was ultimately what led to the president asking for and accepting the resignation of Gen. Flynn,” Mr. Spicer said. “The evolving and eroding level of trust as a result of this situation and a series of other questionable instances.”

Vice President Pence and others relied on information from Gen. Flynn when speaking with reporters about whether the national security adviser discussed U.S. economic sanctions against Russia with the Russian Ambassador Sergey Kislyak during the presidential transition. Gen. Flynn later told officials the sanctions may have been discussed.

Mr. Spicer said President Trump, known to be fiercely loyal, had decided to withhold his judgment on Mr. Flynn’s fate until the White House counsel was finished conducting a review of the legal issues raised by the calls. Many Democratic voices have raised the possibility that Gen. Flynn violated the Logan Act, which is factually false. The only crime committed was the leak that led to the revelation, as well as the wire-tapping of Gen. Flynn’s phone call with the Russian ambassador.

The Justice Department (DOJ) had reportedly warned the Trump administration that the situation left Gen. Flynn potentially vulnerable to blackmail. However, that “warning” came under the direction of the now-disgraced and former acting attorney general Sally Yates, an Obama appointee dubbed by insiders a political hack. Further, Gen. Flynn was cleared of wrongdoing by an FBI probe.

“There is nothing the general did that was a violation of any sort. He was well within his duties to discuss issues of common concern between the two countries,” Mr. Spicer said.

The resignation made Lt. Gen. Flynn the shortest serving official in the post ever in U.S. history. Army Lt. Gen. Keith Kellogg, who was tapped for chief of staff and executive secretary of the National Security Council, is serving as acting national security advisor until President Donald J. Trump appoints a permanent successor.

Gen. Kellogg, as well as Gen. David Petraeus, the hero of the Iraq War, are on the shortlist to replace Gen. Flynn. However, Vice Admiral Robert Harward, a former Navy SEAL, is reportedly the leading contender for the job.

Steve King: Leakers 'Need to Be Purged From the Intelligence Community'