Netanyahu: ‘There is No Greater Supporter of the Jewish State Than President Donald Trump’ 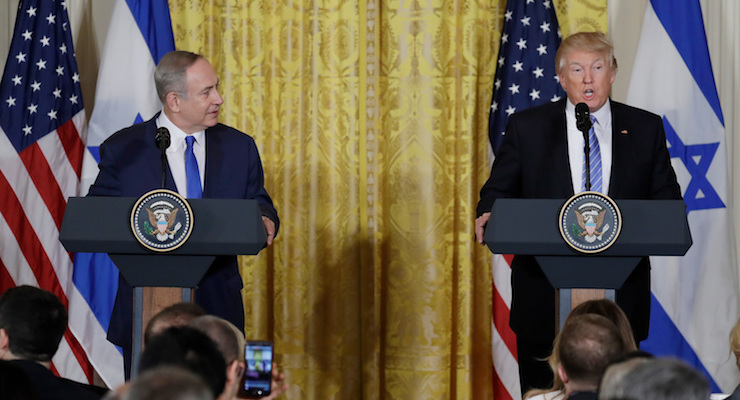 In a friendly joint press conference in the East Room on Wednesday, President Donald J. Trump and Israeli Prime Minister Benjamin Netanyahu agreed the relationship between the two nations has never been stronger.

The president opened up the press conference by welcoming the prime minister to the White House and referring to him as “my friend.”

“I’ve known the President and I’ve known his family and his team for a long time,” Prime Minister Netanyahu said. “There is no greater supporter of the Jewish people or the Jewish state than President Donald Trump. I think we should put that to rest.”

President Trump raised the issue of anti-Israeli bias at the United Nations (UN), and the prime minister called on the two nations to seize the opportunity to rollback the rising tide of radical Islam.

The press conference stood in stark contrast to prior visits to the White House by the Israeli prime minister under former President Barack Obama, which were often cold. The two didn’t agree on every issue, including Israeli settlements in the West Bank, but the Mr. Netanyahu even noted that no alliance ever will. President Trump told Prime Minister Netanyahu he’d like to see him “hold back on settlements for now” until negotiations for a Middle East peace agreement can begin.

President Trump also said the U.S. is actively “looking at” moving U.S. Embassy in Israel to Jerusalem, which would fulfill a 21-year old promise by the U.S. to Israel. However, as People’s Pundit Daily previously reported, the Trump Administration has in fact made the move a priority item.

The president chose David Friedman as the U.S. Ambassador to Israel, who is a longtime advocate of relocation.

Republican Sens. Ted Cruz (TX), Marco Rubio and Dean Heller (Nev.), introduced a bill in early Jan. that would move the U.S. embassy in Israel from Tel Aviv to Jerusalem. The Jerusalem Embassy and Recognition Act recognizes Jerusalem as the capital of Israel and mandates the relocation of the U.S. embassy to Jerusalem in order for it to “remain an undivided city in which the rights of every ethnic and religious group are protected as they have been by Israel since 1967.”

Steve King: Leakers 'Need to Be Purged From the Intelligence Community'