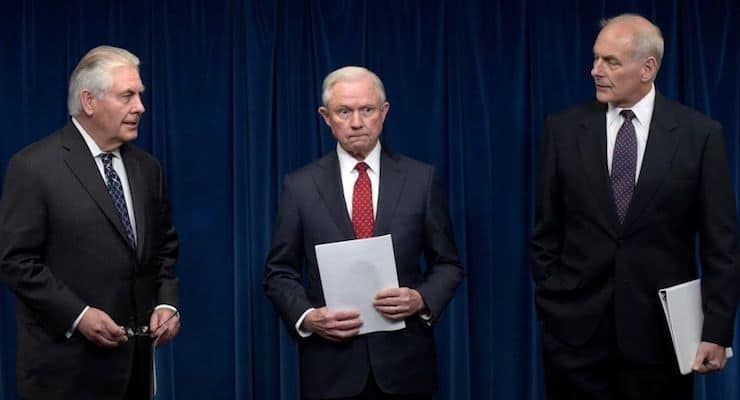 President Donald J. Trump on Monday signed a new executive order suspending the refugee program and entry to the U.S. for travelers from 6 Muslim-majority nations known to be hotbeds of Islamic terrorism. The administration tailored the order to withstand liberal court scrutiny.

The new “Executive Order Protecting The Nation From Foreign Terrorist Entry Into The United States” specifically cites the president’s authority granted by the U.S. Constitution and the U.S. Congress, specifically the Immigration and Nationality Act (INA), to suspend refugee entries for 120 days.

However, it no longer will suspend Syrian refugee admissions indefinitely and excludes Iraq.

The order also excludes green card holders but still impacts travelers from six nations–Iran, Libya, Somalia, Sudan, Syria and Yemen–who did not obtain a visa before Jan. 27 from entering the United States for 90 days.

Secretary of State Rex Tillerson said he spoke with the Iraqi government about its vetting process and felt that the screening system was thorough enough to stand on its own.

“The State Department will coordinate with other agencies to implement this temporary ban in an orderly fashion,” Secretary of State Tillerson said.

“We must undertake a rigorous review of our visa and refugee vetting programs to increase our confidence in the entry decisions we make for visitors and immigrants to the United States,” Kelly said. “We cannot risk the prospect of malevolent actors using our immigration system to take American lives.”

For countries impacted by the order, there is a 50-day window to comply with requests to improve the “quality” of the information provided to U.S. officials for the purpose of vetting. If they do not comply, the State Department, Homeland Security (DHS) and intelligence agencies can make additional recommendations on what, if any, restrictions should be imposed.

President Trump will also cap the number of refugees accepted by the U.S. annually to 50,000–down sharply from the 110,000 set by the Obama administration–but in line with public opinion.

According to the new executive order, the U.S. Department of Homeland Security will have 20 days to perform a “global, country-by-country review of the identity and security information that each country provides to the U.S. government to support U.S. visa and other immigration benefit determinations.”

The new order also details categories of people eligible to enter the United States for business or medical travel purposes.

Meanwhile, President Trump’s executive action comes on the heels of the Department of Homeland Security revealing nearly a third of the 1,000 domestic terrorism cases currently being investigated by the Federal Bureau of Investigation (FBI) involve those admitted to the U.S. as refugees.

In 2015, FBI Director James Comey said the Bureau was investigating roughly 900 terror probes including every U.S. state. But Monday’s leaked report represents the first official solid tie between the refugee resettlement program and an increase in terrorism.