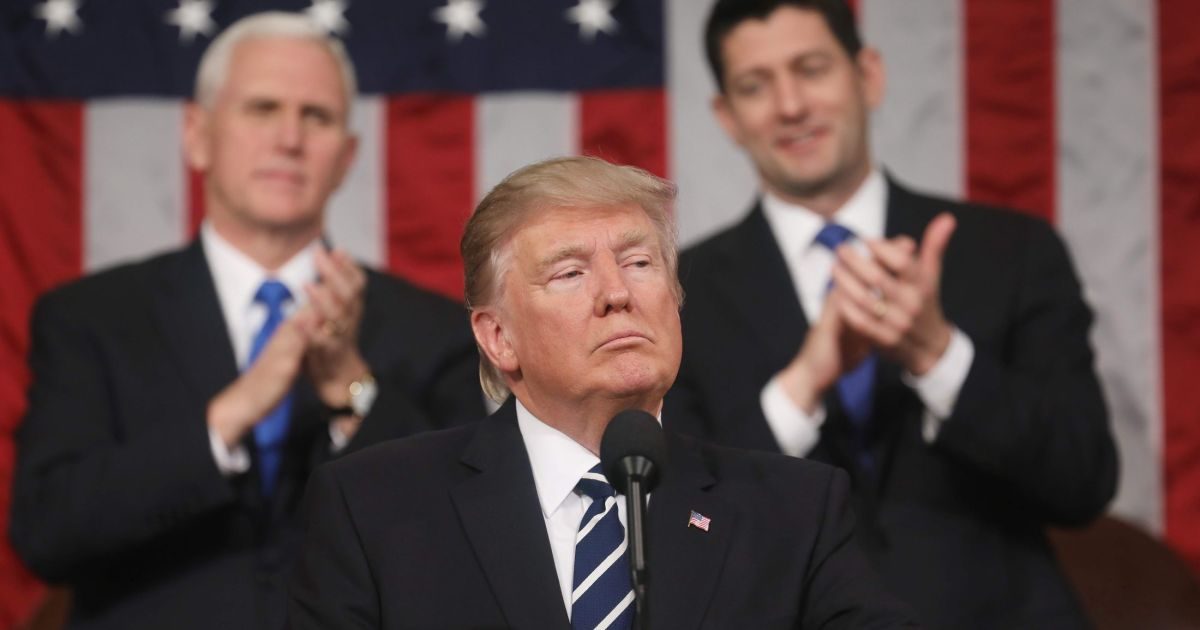 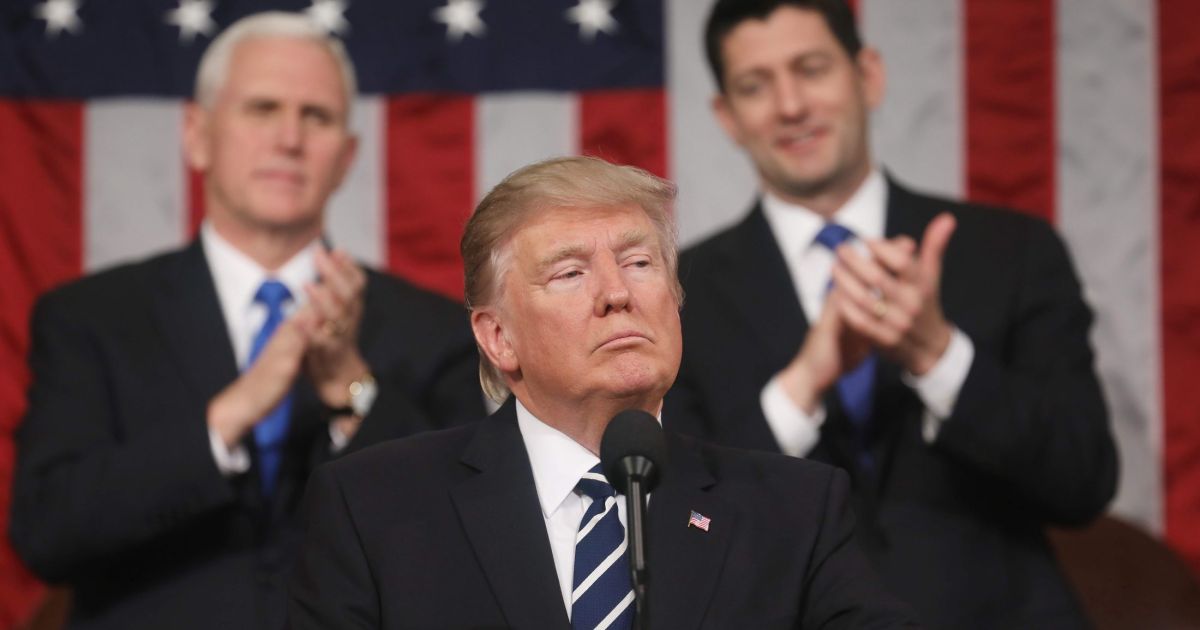 President Donald Trump delivered his first State of the Union address that called for unity and an understanding that it is “the people who are making America great again.”

“Tonight, I call upon all of us to set aside our differences, to seek out common ground, and to summon the unity we need to deliver for the people – this is really the key – these are the people we were elected to serve,” he said. “Let us begin tonight by recognizing that the state of our Union is strong because our people are strong.”

Here are the notable quotables by issue that drew 115 applause lines.

“Since the election, we have created 2.4 million new jobs. including 200,000 new jobs in manufacturing alone,” he said. “After years and years of wage stagnation, we are finally seeing rising wages.”

“This is in fact our new American moment. There has never been a better time to start living the American Dream,” he said. “No matter where you have been, or where you come from, this is your time. If you work hard, if you believe in yourself, if you believe in America, then you can dream anything, you can be anything, and together, we can achieve absolutely anything.”

“Working with the Senate, we are appointing judges who will interpret the Constitution as written, including a great new Supreme Court Justice, and more circuit court judges than any new administration in the history of our country.”

“Last year, the Congress passed, and I signed, the landmark VA Accountability Act,” he said. “I will not stop until our veterans are properly taken care of, which has been my promise to them from the very beginning of this great journey.”

“America has also finally turned the page on decades of unfair trade deals that sacrificed our prosperity and shipped away our companies,” he said. “The era of economic surrender is totally over. From now on, we expect trading relationships to be fair and, very importantly, reciprocal.”

“We will build gleaming new roads, bridges, highways, railways, and waterways across our land. And we will do it with American heart, and American hands, and American grit.”

“Tonight, I’m calling on Congress to produce a bill that generates at least $1.5 trillion for the new infrastructure investment that our country so desperately needs.”

“As America regains its strength, this opportunity must be extended to all citizens,” he said. “That is why this year we will embark on reforming our prisons to help former inmates who have served their time get a second chance at life.”

“Tonight, I am calling on the Congress to finally close the deadly loopholes that have allowed MS-13, and other criminals, to break into our country.”

“As President of the United States, my highest loyalty, my greatest compassion, and my constant concern is for America’s children, America’s struggling workers, and America’s forgotten communities.”

“Tonight I am extending an open hand to work with members of both parties – Democrats and Republicans – to protect our citizens of every background, color, religion, and creed.”

“My duty, and the sacred duty of every elected official in this chamber, is to defend Americans… because Americans are dreamers too.”

“Struggling communities, especially immigrant communities, will also be helped by immigration policies that focus on the best interests of American workers and American families.”

“The first pillar of our framework generously offers a path to citizenship for 1.8 million illegal immigrants who were brought here by their parents at a young age. That covers almost 3 times more people than the previous administration.”

“Under our plan, those who meet education and work requirements, and show good moral character, will be able to become full citizens of the United States over a 12-year period.”

“The second pillar fully secures the border. That means building a great wall on the Southern border.”

“Our plan closes the terrible loopholes exploited by criminals and terrorists to enter our country, and it finally ends the horrible and dangerous practice of ‘catch and release.'”

“The third pillar ends the visa lottery, a program that randomly hands out green cards without any regard for skill, merit, or the safety of American people.”

“The fourth and final pillar protects the nuclear family by ending chain migration. Under the current broken system, a single immigrant can bring in virtually unlimited numbers of distant relatives.”

“In recent weeks, two terrorist attacks in New York were made possible by the visa lottery and chain migration,” he said. “In the age of terrorism, these programs present risks we can just no longer afford.”

“In 2016, we lost 64,000 Americans to drug overdoses: 174 deaths per day. 7 per hour. We must get much tougher on drug dealers and pushers if we are going to succeed in stopping this scourge.”

“My administration is committed to fighting the drug epidemic.”

“We face rogue regimes, terrorist groups and rivals like China & Russia that challenge our interests, our economy and our values,” he said. “I am asking the Congress to end the dangerous defense sequester and fully fund our great military.”

“As part of our defense, we must modernize and rebuild our nuclear arsenal, hopefully never having to use it, but making it so strong and powerful that it will deter any acts of aggression.”

“Perhaps someday in the future there will be a magical moment when the countries of the world will get together to eliminate their nuclear weapons. Unfortunately, we are not there yet, sadly.”

“I also pledged that we would work with our allies to extinguish ISIS from the face of the Earth. One year later, I am proud to report that the coalition to defeat ISIS has liberated very close to 10% of the territory just recently held by these killers in Iraq and Syria.”

“We will continue our fight until ISIS is defeated.”

“Terrorists who do things like place bombs in civilian hospitals are evil. When possible, we have no choice but to annihilate them.”

“In the past, we have foolishly released hundreds and hundreds of dangerous terrorists, only to meet them again on the battlefield, including the ISIS leader, al-Baghdadi.”

“I just signed, prior to walking in, an order directing Secretary Mattis… to reexamine our military detention policy, and to keep open the detention facilities in Guantánamo Bay.”

“Our warriors in Afghanistan also have new rules of engagement. Along with their heroic Afghan partners, our military is no longer undermined by artificial timelines, and we no longer tell our enemies our plans.”

“Last month, I also took an action endorsed unanimously by the U.S. Senate just months before: I recognized Jerusalem as the capital of Israel.”

“I am asking the Congress to pass legislation to help ensure American foreign-assistance dollars always serve American interests, and only go to friends of America, not enemies of America.”

“No regime has oppressed its own citizens more totally or brutally than the cruel dictatorship in North Korea,” he said. “North Korea’s reckless pursuit of nuclear missiles could very soon threaten our homeland.”

“Past experience has taught us that complacency and concessions only invite aggression and provocation,” President Trump added. “I will not repeat the mistakes of past administrations that got us into this very dangerous position.”

“Otto Warmbier was a hardworking student at the University of Virginia, and a great student he was,” he said before recognizing his mother and father in the audience. “Tonight, we pledge to honor Otto’s memory with total American resolve.”

Monument to the American People

“A special place called America was home to an incredible people with a revolutionary idea: that they could rule themselves,” President Trump said at the start of the closing. “That they could chart their own destiny. And that, together, they could light up the entire world.”

“Atop the dome of this Capitol stands the Statue of Freedom,” he added. “She stands tall and dignified among the monuments to our ancestors who fought and lived and died to protect her.”

“Freedom stands tall over one more monument: this one. This Capitol. This living monument to the American people. We’re a people whose heroes live not only in the past but all around us, defending hope, pride and defending the American way.”

“They defend our flag abroad. They are strong moms and brave kids. They are firefighters, police officers, border agents, medics, and Marines. But above all else, they are Americans. And this Capitol, this city and this Nation, belongs entirely to them.”

House Speaker Paul Ryan: "Let It All Out," "Cleanse" the FBI, Release the Memo