U.S. President Donald Trump walks from Marine One as he returns from a day trip to Atlanta on the South Lawn of the White House in Washington, U.S., April 28, 2017. (Photo: Reuters)

President Donald Trump has pulled out of the nuclear summit with North Korea scheduled for June 12 in Singapore, sending a bold letter (read below) to Kim Jong Un that left the door open to future talks. The decision comes after North Korea destroyed a nuclear site but also as Kim’s behavior was influenced by their neighbor to the North.

“We greatly appreciate your time, patience, and effort with respect to our recent negotiations and discussions relative to a summit long sought by both parties, which was scheduled to take place on June 12 in Singapore,” the letter to Kim states. “We were informed that the meeting was requested by North Korea, but that to us is totally irrelevant. I was very much looking forward to being there with you.”

Ultimately, President Trump felt he had little choice after a key member of the Kim regime made less-than flattering comments about Vice President Mike Pence, publicly calling him “a political dummy” and “ignorant.” But he left the door open in a textbook display of the Art of the Deal.

“Sadly, based on the tremendous anger and open hostility displayed in your most recent statement, I feel it is inappropriate, at this time, to have this long-planned meeting,” he wrote. “Therefore, please let this letter serve to represent that the Singapore summit, for the good of both parties, but to the detriment of the world, will not take place.”

“You talk about your nuclear capabilities, but ours are so massive and powerful that I pray to God they will never have to be used.”

At the White House on Tuesday, President Trump said there was a “very substantial chance” the June 12 meeting with Kim “won’t work out.” When asked privately, he gave the meeting 50/50 odds of taking place.

“We’re working on something and there’s a chance that it may work out,” President Trump said during a meeting with South Korean leader Moon Jae-in. “There’s a chance, there’s “a very substantial chance it won’t work out.”

Speaking directly to Kim, and through diplomatic channels, President Trump has guaranteed his personal and national safety, as well as regime credibility. In the letter, he thanked him for the release of hostages this month, which served as a gesture of good faith.

“I want to thank you for the release of the hostages who are now home with their families,” President Trump wrote. “That was a beautiful gesture and was very much appreciated.”

But after a meeting with Chinese President Xi Jinping, the North Korean dictator’s behavior changed and the president believes he needs a little reminder as to why he was forced to the table in the first place.

“If you change your mind having to do with this most important summit, please to not hesitate to call me or write,” President Trump wrote to Kim. “The world, and North Korea in particular, has lost a great opportunity for lasting peace and great prosperity and wealth. The missed opportunity is a truly sad moment in history.” 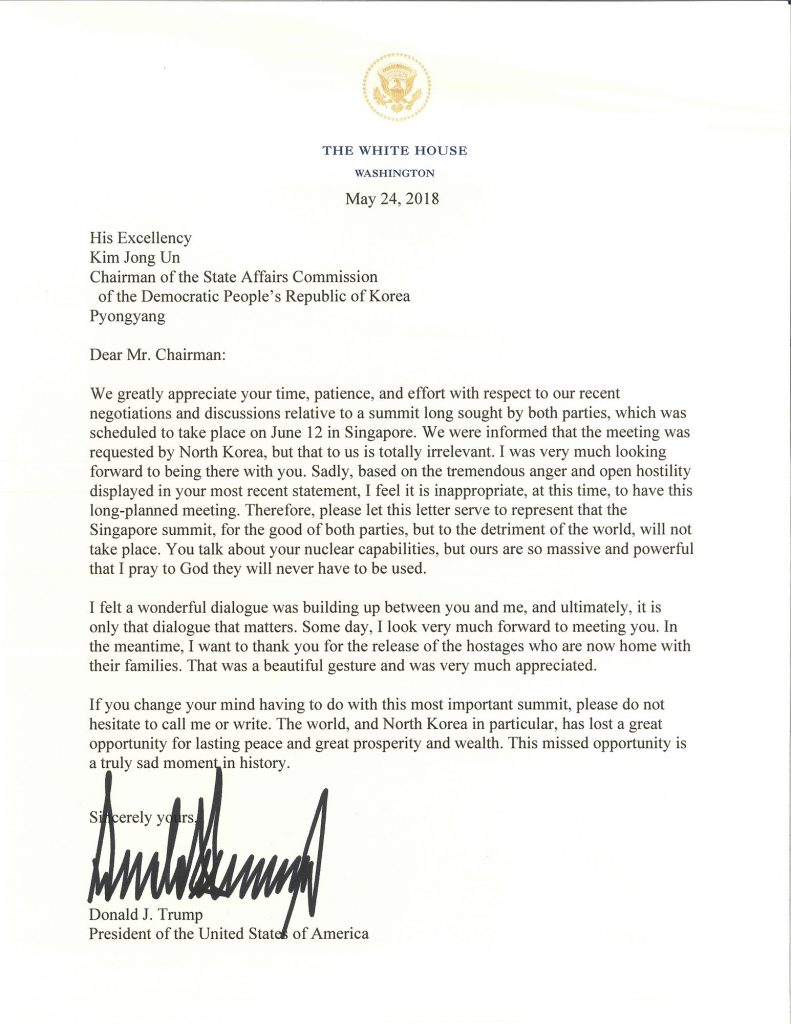