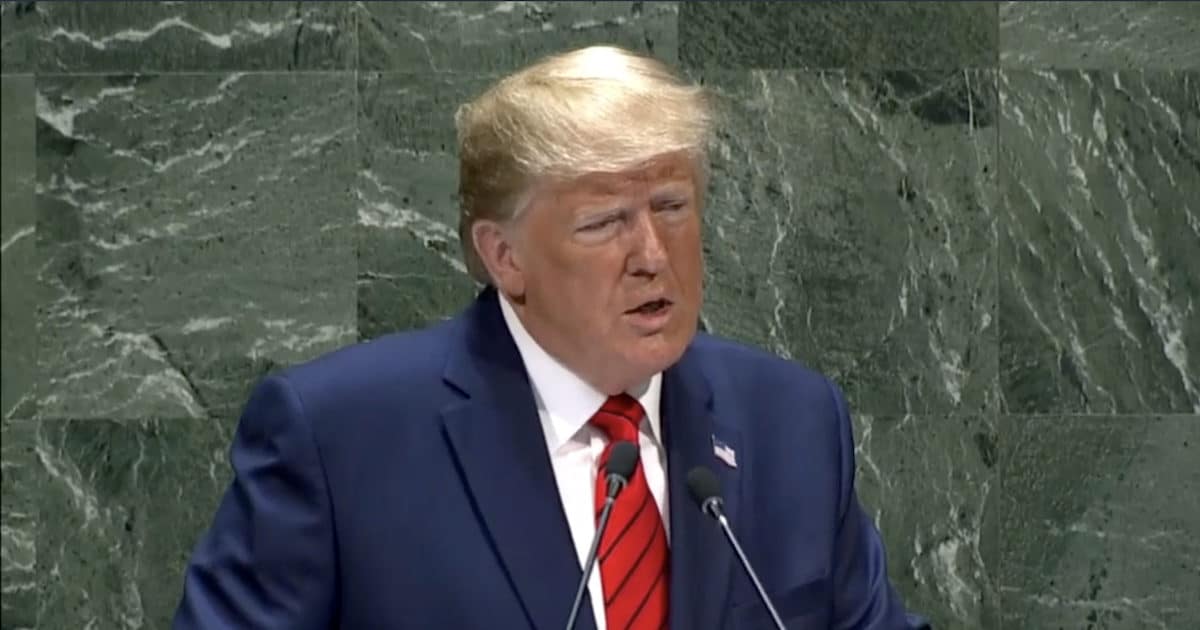 President Donald J. Trump defended his decision to bring home U.S. troops fighting in Syria, part of a promise he’s been trying to keep for nearly three years. In a series of threads on Twitter, the president posted that he was elected to end “endless wars” and said the U.S. will only fight “where it is to our benefit and only to win.”

“The United States was supposed to be in Syria for 30 days, that was many years ago,” he tweeted on Monday. “We stayed and got deeper and deeper into battle with no aim in sight.”

Turkey, a controversial member of NATO — the North Atlantic Treaty Organization, also called the North Atlantic Alliance — is expected to launch a “long-planned operation” against the Kurds in Northern Syria. Kurdish YPG fighters are viewed as terrorists by Turkey.

The president’s critics argue the withdrawal will force the Kurds into the arms of Russia, which backs Syrian President Bashar al-Assad. But President Trump argued the Kurds “were paid massive amounts of money and equipment” to fight and “have been fighting Turkey for decades.”

The move is seen by hawks in the Republican Party as a gift to Russia. Democrats jump on any chance to disagree with or oppose the president. Senators Lindsey Graham, R-S.C., and Chris Van Hollen, D-Md., threatened to introduce bipartisan sanctions against Turkey if it invades Syria, including a call for the suspension of NATO membership.

Senator Graham, often an ally of the president, disagreed with the president and said the move will “turn Syria over to Russia, Iran, and Turkey.”

President Trump tweeted Russia and China are unhappy with the decision “because they love seeing us bogged down in a quagmire.”

“I was elected on getting out of these ridiculous endless wars, where our great Military functions as a policing operation to the benefit of people who don’t even like the USA,” he tweeted. “The two most unhappy countries at this move are Russia & China, because they love seeing us bogged down, watching over a quagmire, & spending big dollars to do so.”

“When I took over, our Military was totally depleted. Now it is stronger than ever before. The endless and ridiculous wars are ENDING! We will be focused on the big picture, knowing we can always go back & BLAST!”

In his first address to the United Nations General Assembly in September 2017, President Trump outlined the tenets of what he called “principled realism.” The roughly 40-minute address served as an introduction to the Trump Doctrine.

He defined the U.S. as a nation reluctant but not unwilling to use its massive military power, and told the international delegations they should no longer expect hollow demands for burden sharing.

Perhaps most importantly, he stressed an unwillingness to engage in endless wars. Candidate Donald Trump campaigned against military intervention in the Middle East and for a refocusing on Americans at home.

The businessman and political newcomer soon learned D.C. is a company town, and the president often is forced to nominate “the best people” who can be confirmed by the more hawkish U.S. Senate.

While it is true the president has appointed and nominated others more closely aligned with his agenda, they’ve generally taken a back seat to picks deemed acceptable to Establishment Republicans.

That includes numerous top positions filled by officials who do not support his agenda, and have even acted to sabotage it. Unsurprisingly, the administration’s foreign policy has always been a push-and-pull between D.C. interventionists and the “America First” wing represented by the president.

In Spring of 2018, the president told his national security team in the Situation Room that U.S. troops must come home from Syria. The primary objective, at least publicly, had been the defeat of ISIS, or the Islamic State.

Then-current estimates had pegged the number of remaining ISIS fighters at less than 2,000. He ordered the Central Intelligence Agency (CIA) to shutdown Operation Timber Sycamore, a covert operation authorized by Barack Obama that ultimately aided in the creation and rise of ISIS.

Initially, CIA flatly refused to carry out those orders and hawkish administration officials — to include Generals James Mattis and H.R. McMaster — were concerned a similar announcement was imminent in Afghanistan.

The civil war was being used as a predicate for regime change in Syria. They want to remove President Assad.

Eight months after the meeting in the Situation Room, General Mattis (defense) had followed General McMaster out the door. The former national security advisor, who developed and backed a strategy of continuous U.S. involvement in Afghanistan, was replaced earlier in the year.

The generals cited a difference of opinion on key decisions. It was the same reasoning behind the most recent departure of former U.S. Ambassador John Bolton, who replaced General McMaster as national security advisor.

The White House maintains Mr. Bolton was fired, but he claimed to have resigned over disagreements. Those disagreements were reportedly over Syria, Iran and Afghanistan. Since his departure, Mr. Bolton has engaged in what’s been described as “a revenge tour.”