The Euro model (ECMWF) forecasts Tropical Depression Michael to make landfall as Hurricane Michael at the Florida Panhandle along the U.S. Gulf Coast on Wednesday. The model above tracks over a 240-hour period beginning the morning of Monday, October 8, 2018.

“Tropical Storm #Michael is strengthening and it is almost a hurricane,” the National Hurricane Center in Miami, Florida, tweeted after the morning advisory. “Hurricane and tropical storm watches are now in effect for portions of the Gulf Coast.”

Tropical Storm #Michael is strengthening and it is almost a hurricane. Hurricane and tropical storm watches are now in effect for portions of the Gulf Coast. Here are the 4 am CDT October 8th Key Messages. Go to https://t.co/tW4KeGdBFb for more information. pic.twitter.com/BEkmH6UvQL

“A northward motion at a slightly faster forward speed is expected through Tuesday night, followed by a northeastward motion on Wednesday and Thursday. On the forecast track, the center of Michael will move northward across the Yucatan Channel today, and then across the eastern Gulf of Mexico this evening through Wednesday.

Michael is expected to move inland over the Florida Panhandle or Florida Big Bend area on Wednesday, and then move northeastward across the southeastern United States Wednesday night and Thursday. Maximum sustained winds are near 70 mph (110 km/h) with higher gusts. Additional strengthening is forecast, and Michael is expected to become a hurricane later today.

Michael is forecast to be near or at major hurricane strength when it reaches the northeastern Gulf of Mexico Tuesday night and Wednesday. Tropical-storm-force winds extend outward up to 175 miles (280 km) from the center. The latest minimum central pressure reported by an Air Force reconnaissance aircraft is 982 mb (29.00 inches).” 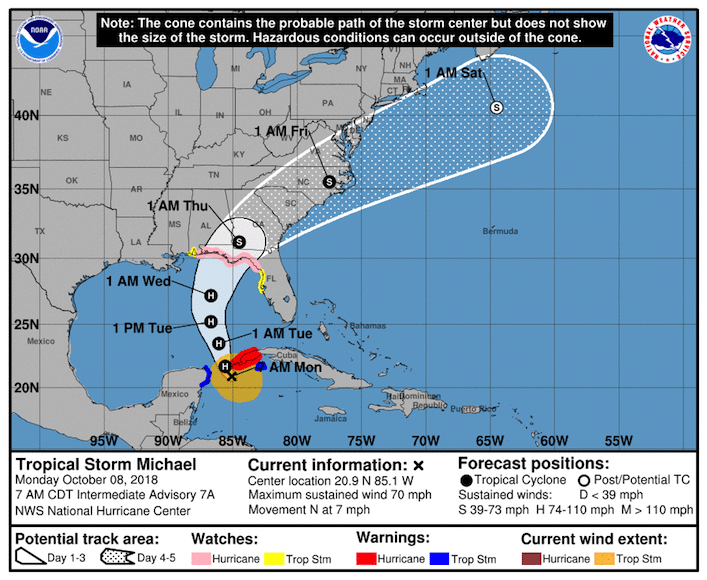 This graphic shows an approximate representation of coastal areas under a hurricane warning (red), hurricane watch (pink), tropical storm warning (blue) and tropical storm watch (yellow). The orange circle indicates the current position of the center of the tropical cyclone. The black line, when selected, and dots show the National Hurricane Center (NHC) forecast track of the center at the times indicated. The dot indicating the forecast center location will be black if the cyclone is forecast to be tropical and will be white with a black outline if the cyclone is forecast to be extratropical. If only an L is displayed, then the system is forecast to be a remnant low. The letter inside the dot indicates the NHC’s forecast intensity for that time:
D: Tropical Depression – wind speed less than 39 MPH
S: Tropical Storm – wind speed between 39 MPH and 73 MPH
H: Hurricane – wind speed between 74 MPH and 110 MPH
M: Major Hurricane – wind speed greater than 110 MPH
(National Hurricane Center, Miami, Florida.

Gov. Rick Scott to Declare State of Emergency for Counties in Florida Panhandle and Big Bend