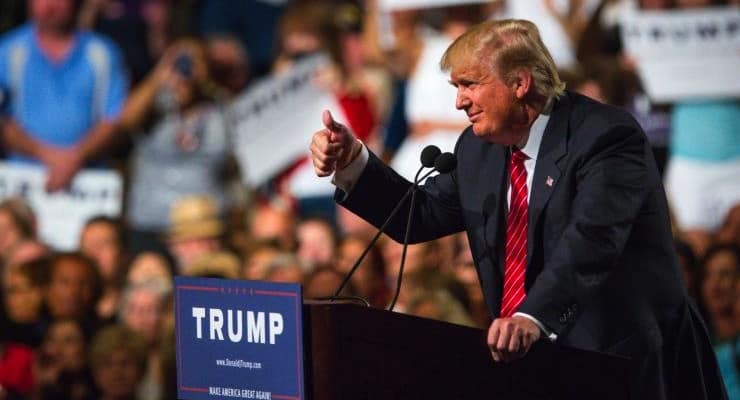 With Hillary Clinton’s multiple misdeeds coming to light and causing her political problems, reflected in her declining support in the polls, both she and the Democratic Party have reason to be concerned. But both of them may yet be rescued by “The Donald,” who can turn out to be their Trump card.

Donald Trump has virtually no chance of becoming even the Republican Party’s candidate in 2016, much less being elected President of the United States.

The reason is not hard to understand: Republican voters simply do not trust him, as the polls show. Nor is there any reason why they should trust him, given his chameleon-like changes in the past.

Why then is he the “front-runner” in the polls?

One reason is arithmetic. When there is a small army of Republican candidates, each with a tiny set of supporters, anyone with enough name recognition to get the support of a fifth or a fourth of the Republicans polled stands out, even if twice that many Republicans say they would never vote for him.

When both kinds of Republicans are counted, Donald Trump is both the “front-runner” and the leading pariah. The danger is not that he will get the nomination, but that his irresponsible talk will become the image of the Republican Party, and that his bombast will drown out more sober voices that need to be heard, thereby making it harder to select the best candidate.

More is involved than arithmetic, however. Many Republican voters are so disgusted with their party, especially over its repeated betrayals of them, and of the country, especially when it comes to immigration, that they are immediately attracted to anyone who voices the outrage they feel.

Donald Trump has turned this opening phase of the 2016 primaries into The Donald Trump Show. All of this might be very entertaining, if this were not a crucial juncture in the history of the country and of the world.

But, while all this political theater is going on, the world’s leading promoter of international terrorism — Iran — has gotten a “deal” that all but guarantees that they will have nuclear bombs and, not just incidentally, intercontinental missiles to deliver them.

Iran doesn’t need intercontinental missiles to reach Israel, which is closer to Iran than St. Louis is to Boston. Send not to know for whom the bell tolls, it tolls for thee.

We can only hope that, somewhere among the many Republican candidates, there is someone who can, as president, make the hard decisions and take the hard steps required to undo the utter disaster that looms ahead, as a result of Barack Obama’s feckless foreign policies.

If ever there was a time to carefully sift through all the aspiring Republican candidates, in hopes of finding just one who might be up to the superhuman task ahead, in order to head off a nuclear catastrophe, this is surely the time to look for a solid, wise and steadfast leader.

A shoot-from-the-hip, bombastic show-off is the last thing we need or can afford. As for the Democrats, their leading candidate — Hillary Clinton — was one of the architects of the foreign policy disasters that can turn into world-changing catastrophes.

As for the Republican mob scene, it is a challenge just to remember all the names of the candidates. These include many who must know, in their heart of hearts, that they have no real chance of getting the nomination. But, unless they withdraw, the public’s attention may well be fragmented over too many candidates for them to find a truly promising candidate for president.

My own view is that the last thing we need is another great talker with no track record of actually taking responsibility for running a government at any level. Among the Republican candidates are some governors whose records are worth scrutinizing. But the sooner the talkers are gone, the better. We can only hope that Donald Trump will be leading the procession of talkers headed for the exit. But don’t count on it.

Worse yet, 36 percent of Republicans polled recently say that they would vote for Trump if he ran as a third-party candidate. That would virtually guarantee victory for Hillary Clinton. “The Donald” could definitely be the Democrats’ Trump card.