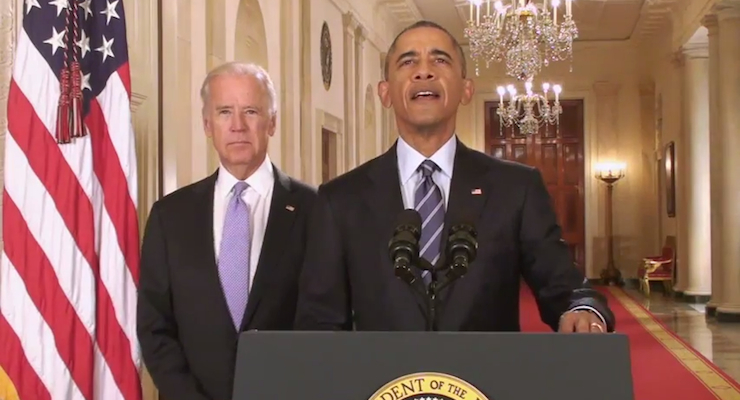 President Obama delivers remarks to announce a historic nuclear deal he says will verifiably prevent Iran from obtaining a nuclear weapon on July 14, 2015.

President Obama’s sordid Iran nuke deal is looking more and more like the foreign policy version of ObamaCare. It’s duplicitous, secretive, destructive and legacy-driven, and he’s going to have to go full community organizer to get it passed.

This deal was born in hell. It is the culmination of Obama’s dangerously flawed philosophy that you enhance national security through appeasement. If we can secure a deal with Satan’s stepchild, after all, we can remake the globe into the peaceful utopia progressives romantically envision.

Never mind that this terrorist theocracy, by its own admission, is immune to rehabilitation. “Death to America, death to Israel.” Even in the midst of negotiations with the Obama regime, the mullahs didn’t bother to pretend they had goodwill toward us.

It was as though Iran’s leaders were trying to validate the deal’s opponents, demonstrating their contempt for America and Israel, showing their intention to continue sponsoring global terrorism, and signaling their unwillingness to submit to legitimate inspections.

Throughout, the Obama regime’s denial of Iran’s malevolence grew in direct proportion to Iran’s confessions. Obama’s essential message to us was: “Don’t listen to the Iranians; they will comply with the terms of the agreement despite insisting they won’t. We must close this deal and make it easier for them to get nukes because they will respond favorably to our magnanimity.”

Obama’s problem is that you can only fool part of the people part of the time. His propaganda machine doesn’t always succeed, as some facts are too stubborn to ignore. Whether there are limits to the Democratic Party’s loyalty to party over country, on the other hand, is another matter. It may approve this deal despite its undeniable flaws and the public’s opposition.

Yes, polls show that just as with ObamaCare, Obama has been unable to fool the majority of Americans into believing that this deal is good for America. A Quinnipiac University poll shows that 57 percent of Americans oppose it, whereas only 28 percent support it. By similar majorities, Americans disapprove of the way Obama is handling the situation in Iran and believe that the deal makes the world less safe.

Don’t assume this gives Obama a second’s pause; it simply inspires him to push harder. But he is growing desperate. Bloomberg reports that “administration officials are increasingly finding themselves on the defensive against criticism from Republicans and some Democrats, as well as vehement opposition from Israel, according to three officials, who all spoke on the condition of anonymity to discuss internal political deliberations.”

So Obama has launched an intense lobbying effort of congressional Democrats. As with the 2012 presidential election, he knows he can’t win GOP support, so he has shucked any pretense of bipartisanship and turned to the far left for support. And like a seasoned community organizer, he is isolating and demonizing his opponents and distorting facts that damage his cause.

As such, Obama is arguing that opposition to his deal is coming from the same groups that led us to war in Iraq, by which he is not so subtly implying Jewish groups. It’s not enough for him to slander Israel’s leaders; he must target Jewish supporters in America, as well, playing to the worst of the old stereotypes.

Meanwhile, Nobel Prize seeker John Kerry is telling us that Iran’s supreme leader wasn’t serious when he called for “death to America.” Secretary of State Kerry assured the House Foreign Affairs Committee that he has “no specific knowledge of a plan by Iran to actually destroy us.” Swell.

The Obama administration wants us to believe it instead of Iran concerning Iran’s intentions. Not to worry, because Obama claims he’s tougher than Ronald Reagan. He’s pursuing a “don’t trust but verify” strategy with Iran. Yet the specifics of the deal scream otherwise. Not only are “anytime, anywhere” site inspections absent from the deal but also the United States has a subordinate role in the inspections process.

The deal results in the likely acceleration of Iran’s acquisition of nuclear weapons, and it frees up billions to Iran, which can and will use the funds to sponsor global terrorism.

Just as with ObamaCare, everything about this deal is wrong and the American people oppose it, which is why Obama will become more militant and deceitful in trying to cram it down our throats.

Have we learned nothing from the ObamaCare nightmare, especially about Obama’s character and designs?

Some reasons for optimism exist. For example, Sen. Chuck Schumer, D-N.Y., is said to be wavering.

Perhaps our side can take a page from Obama’s playbook and pull out all the stops in opposing this deal. The stakes are too high to sit this one out.

Just as with ObamaCare, we can’t rely on America’s waning rule of law to save us from this unconstitutional and reckless monstrosity.