An Appeal to Marco Rubio Supporters 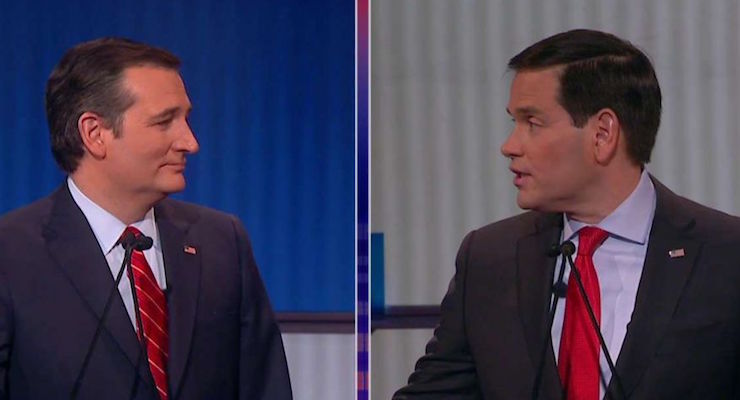 I appealed to Donald Trump supporters to consider voting for Ted Cruz, and I now make the same request of Marco Rubio supporters.

I must emphasize that my primary motivation is to advance conservatism, not to defeat Trump, though the two might be more similar than dissimilar.

The remedy for what ails America is full-throated conservatism, not a smattering of populist ideas — no matter how forcefully implemented — and Cruz represents the best opportunity we’ve had in decades for effecting conservative solutions.

Admittedly, a union of Cruz and Rubio supporters would be tricky because Cruz is anti-establishment and Rubio remains the de facto establishment candidate, despite John Kasich’s increased visibility.

This is an overwhelmingly anti-establishment year, as seen by the combined vote totals of Trump and Cruz. The Trump phenomenon is real, and it has arisen out of the anguished cries of his anti-establishment supporters, which are legitimate. Washington hasn’t been listening, much less responding, to the people’s concerns.

Even if you disagree that anti-establishment sentiment is justified or reject the very notion of “establishment,” surely you’ll concede that a large group of Republican primary voters disagrees with you and intends to do something about it. It’s too late in this primary campaign for you to dissuade them.

Cruz supporters are staunch constitutional conservatives, and most are also anti-establishment because they believe that the GOP establishment hasn’t fought hard enough to block President Obama’s agenda and has sometimes enabled it. Cruz would be taking a risk to unify with Rubio at this point, because Trump supporters would claim that it proves Trump is the only bona fide outsider in the race. They would paint it as a sellout, especially on the important immigration issue.

But even if Cruz went so far as to select Rubio as his running mate, it wouldn’t be a sellout. As president, Cruz would set executive policy. This is also true of the other major issue on which they differ — foreign policy. While Rubio’s foreign policy is more proactive than Cruz’s, Cruz is far from an isolationist and would vigorously protect our interests at home and abroad, first by rebuilding the military. Throughout history, presidential candidates have picked running mates who haven’t perfectly aligned with them on policy.

How about from Rubio’s perspective? Well, both he and his supporters have said that he is nearly as conservative as Cruz and that he’s certainly not for open borders. They insist that even if there was a great difference between him and Cruz on immigration before, that gap has significantly narrowed. And I believe the foreign policy hawks in Rubio’s camp could comfortably live with Cruz’s approach — particularly compared with Trump’s.

Rubio supporters reject the idea that Marco is establishment or centrist in any way. They say he’s a 97 percent conservative and resent the claim that Cruz is the only true conservative in the field. Throughout the budget battles during the past several years, Cruz’s GOP opponents, many of whom are now Rubio supporters, have said that their differences with Cruz and the conservative “firebrands” in Congress are more about strategy than policy. I have expressed my skepticism about that before, but now is a good time to put that to the test. If they really just disagree with Cruz’s tactics and even have thought he has been grandstanding, surely they can put those concerns aside and support Cruz because he is the last best chance to advance conservative ideas they say they believe in.

How about concerns that Cruz wouldn’t be able to work with Congress? Well, if Cruz is elected on presenting the most unambiguous conservative message in years, he will have a mandate to push his conservative solutions through Congress, many of whose members will have been elected with the same message. The climate for advancing an unapologetically conservative agenda under a Cruz presidency would be dramatically different from the one Cruz has encountered under Obama’s presidency. Also, I assume Rubio supporters would consider Rubio a great asset in a Cruz administration because he could help bridge gaps and build coalitions.

Trump boasts that he is building the Republican Party by bringing in new constituencies, and we should applaud that — but not at the expense of losing our bearings. What is the point of expanding a party if, in the process, the party’s platform becomes incoherent? The point of a party is to advance ideas, not the other way around. We mustn’t lose sight of that.

Rubio may be hanging on to the hope that he can turn the tide, but I can’t see how that is remotely realistic. I hope he will withdraw soon and urge his supporters to back Cruz. I have no idea whether they can ever formally join together in a unity ticket, but for the reasons I’ve stated, I am quite open to the possibility.
In the meantime, I urge Cruz supporters and Rubio supporters not to attack and further alienate each other. We each sincerely believe in our respective causes.

Let’s remember that the primary agents of destruction are Obama and his leftist colleagues and causes. Let’s bury the hatchet for the good of this nation, for which conservatism is the only answer.

What if the FBI Is Onto Hillary Clinton?