HomeOpinionIn Hulk and Trump Scandals, the Girls Do Have Names

In Hulk and Trump Scandals, the Girls Do Have Names 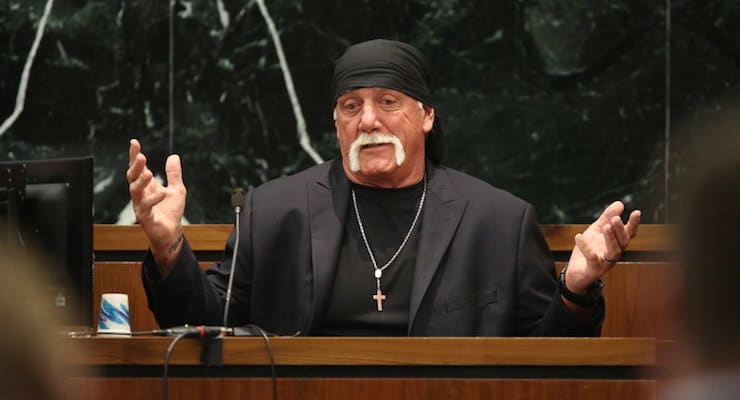 Hulk Hogan, whose real name is Terry Bollea, testifies in court on Tuesday during his trial against Gawker Media, in St Petersburg, Fla. (Photo: John Pendygraft/AP)

If you’ve been following Hulk Hogan’s successful suit against Gawker or Donald Trump’s rumble with a gossip writer, you may have come across some missing people. Both stories lean on “love” triangles in which one of the sides, the woman, is of so little consequence she’s rarely even named.

The men may act with warped motives, but they star in their sordid dramas. By contrast, the women are virtually inanimate objects. They are unthinking hockey pucks being passed among boys to score points against other boys. Doesn’t the alleged source of discord rate at least an honorable mention — or dishonorable one? We’ll take either.

In the Hogan case, Gawker posted a secretly recorded video of the wrestler having sex with the wife of a friend. It was a setup by the friend, a radio personality named Bubba the Love Sponge. A jury awarded Hogan $115 million in damages for the violation of his privacy.

In the course of the reportage, we learn Hulk’s real name, Terry Bollea. We are told that Bubba’s name at birth was Todd Alan Clem. As for Mrs. Love Sponge, much of the commentary leaves her name out altogether. It is Heather Clem, for the record.

It happens that Heather was a real player here, in cahoots with her (now estranged) husband to cash in on Hogan’s public humiliation. She wasn’t tricked into playing the co-starring role in the racy video. So give her credit — for something.

In Trump world, women get passed around like canapes at a cocktail party. When the woman has an incensed male partner, the coverage of the conflict portrays the men as giant elk locking horns in Rocky Mountain National Park. As for the woman they’re allegedly fighting over, she could have moved to Antarctica for all anyone seems to care.

The case of Trump vs. gossip writer A.J. Benza is a notable example. While Benza was on a radio show, Trump called in to announce: “I’ve been successful with your girlfriend. … While you were getting onto the plane to go to California thinking she was your girlfriend, she was someplace that you wouldn’t have been very happy with.”

Benza retaliated with “I can’t wait till your little daughter gets a little older for me.” It was on that level.

Who was the girlfriend? I Googled so that you don’t have to. She’s a model named Kara Young.

Trump did not abduct Young. She joined him of her own volition. And lest you, gentle readers, think we’re being judgmental, let us opine that it would take a sturdy woman to pair with the likes of Benza.

So she, too, should rank as an active player here deserving pity, condemnation or congratulations — but definitely recognition.

In the Italian operatic tradition, Young would have been strangled by now. But then again, the woman doesn’t matter here. Benza had eyes only for Trump’s throat. He went so far as to enlist his cheating partner in his counterattacks, saying Young told him that Trump wears hair plugs. Aha, so The Donald isn’t the hairy beast he pretends to be.

Trump’s bragging of sexual conquests reeks of insecurity and desperation. His attacks on women’s appearance are more pathetic than insulting. I swear, I almost feel sorry for him.

But I don’t feel very sorry for the men he mortifies. They chose Trump girls.

There are good women out there. There are party girls who don’t care. And there are bad women as most of us would define “bad.” Point is, when they are part of the story, they should all be put in it.

What if the Minimum Wage Increase Is a Fraud?

We Don't Have to Break It to Fix It