Is Trump the Peace Candidate? 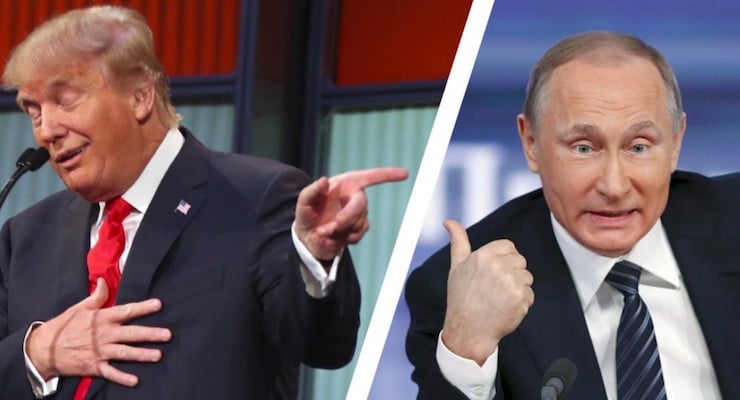 With Democrats howling that Vladimir Putin hacked into and leaked those 19,000 DNC emails to help Trump, the Donald had a brainstorm: Maybe the Russians can retrieve Hillary Clinton’s lost emails.

Not funny, and close to “treasonous,” came the shocked cry.

Trump then told the New York Times that a Russian incursion into Estonia need not trigger a U.S. military response.

Even more shocking. By suggesting the U.S. might not honor its NATO commitment, under Article 5, to fight Russia for Estonia, our foreign-policy elites declaimed, Trump has undermined the security architecture that has kept the peace for 65 years.

More interesting, however, was the reaction of Middle America. Or, to be more exact, the nonreaction. Americans seem neither shocked nor horrified. What does this suggest?

Behind the war guarantees America has issued to scores of nations in Europe, the Mideast and Asia since 1949, the bedrock of public support that existed during the Cold War has crumbled.

We got a hint of this in 2013. Barack Obama, claiming his “red line” against any use of poison gas in Syria had been crossed, found he had no public backing for air and missile strikes on the Assad regime.

The country rose up as one and told him to forget it. He did.

We have been at war since 2001. And as one looks on the ruins of Afghanistan, Iraq, Syria, Libya and Yemen, and adds up the thousands dead and wounded and trillions sunk and lost, can anyone say our War Party has served us well?

On bringing Estonia into NATO, no Cold War president would have dreamed of issuing so insane a war guarantee.

Eisenhower refused to intervene to save the Hungarian rebels. JFK refused to halt the building of the Berlin Wall. LBJ did nothing to impede the Warsaw Pact’s crushing of the Prague Spring. Reagan never considered moving militarily to halt the smashing of Solidarity.

Were all these presidents cringing isolationists?

Rather, they were realists who recognized that, though we prayed the captive nations would one day be free, we were not going to risk a world war, or a nuclear war, to achieve it. Period.

In 1991, President Bush told Ukrainians that any declaration of independence from Moscow would be an act of “suicidal nationalism.”

Today, Beltway hawks want to bring Ukraine into NATO. This would mean that America would go to war with Russia, if necessary, to preserve an independence Bush I regarded as “suicidal.”

Have we lost our minds?

The first NATO supreme commander, Gen. Eisenhower, said that if U.S. troops were still in Europe in 10 years, NATO would be a failure. In 1961, he urged JFK to start pulling U.S. troops out, lest Europeans become military dependencies of the United States.

Was Ike not right? Even Barack Obama today riffs about the “free riders” on America’s defense.

Is it really so outrageous for Trump to ask how long the U.S. is to be responsible for defending rich Europeans who refuse to conscript the soldiers or pay the cost of their own defense, when Eisenhower was asking that same question 55 years ago?

In 1997, geostrategist George Kennan warned that moving NATO into Eastern Europe “would be the most fateful error of American policy in the post-Cold War era.” He predicted a fierce nationalistic Russian response.

Was Kennan not right? NATO and Russia are today building up forces in the eastern Baltic where no vital U.S. interests exist, and where we have never fought before – for that very reason.

There is no evidence Russia intends to march into Estonia, and no reason for her to do so. But if she did, how would NATO expel Russian troops without air and missile strikes that would devastate that tiny country?

And if we killed Russians inside Russia, are we confident Moscow would not resort to tactical atomic weapons to prevail? After all, Russia cannot back up any further. We are right in her face.

On this issue Trump seems to be speaking for the silent majority and certainly raising issues that need to be debated.

How long are we to be committed to go to war to defend the tiny Baltic republics against a Russia that could overrun them in 72 hours?

When, if ever, does our obligation end? If it is eternal, is not a clash with a revanchist and anti-American Russia inevitable?

Are U.S. war guarantees in the Baltic republics even credible?

If the Cold War generations of Americans were unwilling to go to war with a nuclear-armed Soviet Union over Hungary and Czechoslovakia, are the millennials ready to fight a war with Russia over Estonia?

The trade-off: Russia ensures the independence of the Baltic republics that she let go. And NATO gets out of Russia’s face.

Should Russia dishonor its commitment, economic sanctions are the answer, not another European war.

There's No Bernie Revolution Without Bernie

Setting Aside Crassness and Bluster, Trump’s a Typical Big-Government Republican