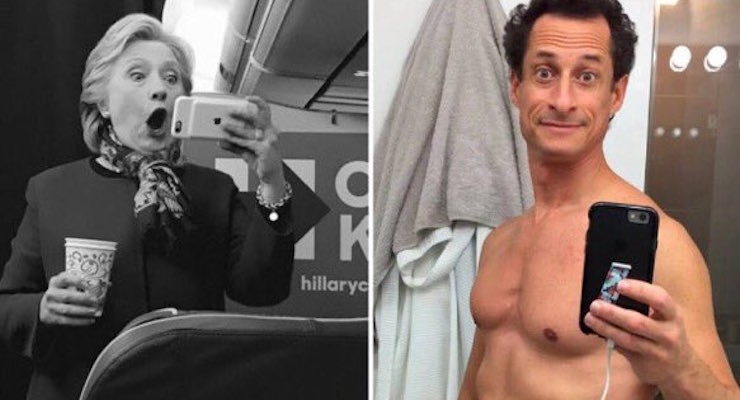 The horrid day is rapidly approaching. Yes, November 8 is when Americans will choose which Tweedledee/Tweedledum fire to jump into after two terms of Barack Obama’s slow-growth frying pan.

So let’s try to enjoy some gallows humor in advance.

Hillary already has been the target of satire in one Nazi movie. This time she’s graduated to a Nazi movie featuring the head of the National Socialist Workers Party.

Speaking of Ms. Clinton, I can greatly sympathize with the disgust she felt when receiving that selfie from America’s laughingstock, Anthony Weiner.

Now let’s train our fire on one of Hillary’s long-time donors and supporters.

We even have some satire mocking the Libertarian nominee. Here are some excerpts from an article posted by the Onion, ostensibly written by Gov. Gary Johnson.

…there is a once-in-a-lifetime opportunity here for a third-party candidate to present a transformative new vision for our nation and win the support of voters all across the country. And frankly, I am just as disappointed as you are to realize I am in no way qualified to do that. …As it turns out, though, being a high-profile presidential candidate requires you to do a lot of stuff you don’t have to do when you’re only pulling in 1 percent of the vote, like know all about foreign affairs and domestic policy. …as you can probably tell by now, I am simply not up to the task. Not even close. …I’ve had to field questions on all kinds of subjects I just don’t have any clue about. It’s actually been pretty embarrassing. …What makes it really disappointing is that I truly believe libertarianism has valuable ideas to contribute to America’s political discourse. …But boy oh boy, am I ever doing a shitty job of communicating all that.

For what it’s worth, I suspect most Americans are relieved that Gary Johnson doesn’t know about places like Aleppo. That way, he’s less likely to invade and cause more instability and anti-American radicalism in the Middle East.