What Would Trump’s Rising Approval Among Blacks Mean for Election Day? 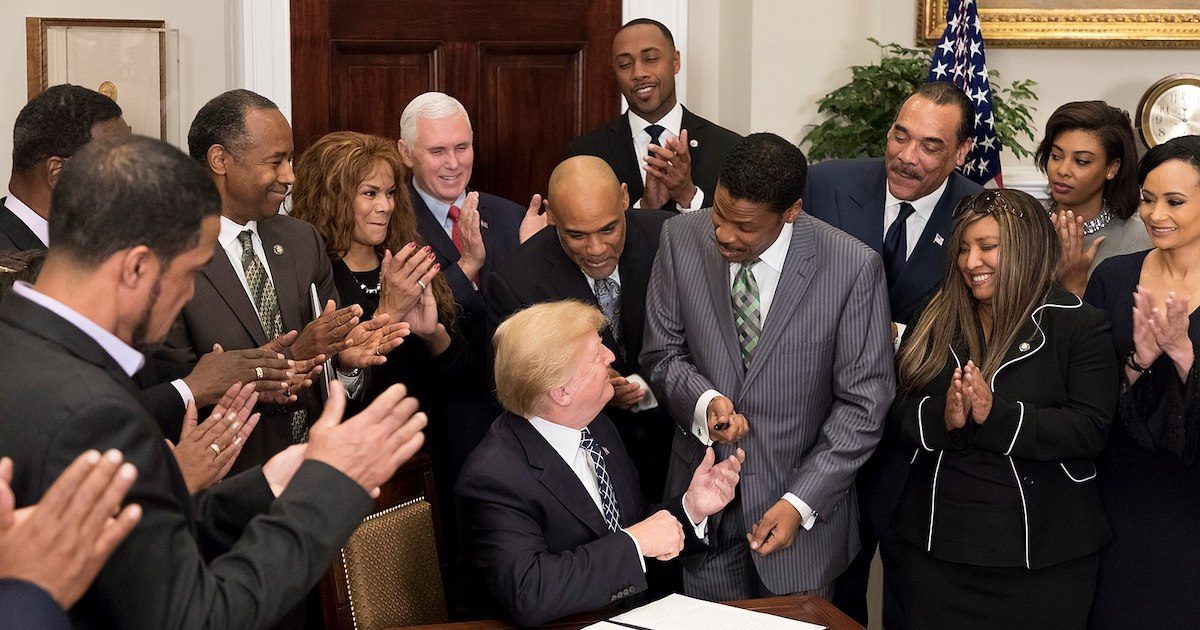 After May of 2017, I noticed a surprising and unaccountable rise in President Donald Trump’s approval rating among black voters. This was against the aggregate trend for his approval rating, which was showing a steep decline from 43.1% to his lowest ever recorded of 37.0% in July.

I began tracking Trump’s approval with this voting bloc among registered voters in the YouGov/Economist Poll, and the trend was confirmed in other polling outlets.

What I found after a full year of tracking from May 2017 to May 2108 seemed totally at odds with the aggregate of all of voters, which at around around 41% was only 2 points higher than his previous year’s level.

Trump’s approval with black voters in May 2017 was 17%, 9 points higher than his actual Election Day vote at 8%. That was still 2 points higher than Mitt Romney received. It hit a high of 21% in July and fell dramatically to a low of 5% during the Charlottesville controversy before, again surprisingly, rising back up to 17% in July two months later.

Clearly, if even 14% translated into actual votes on Election Day 2020, then Trump would win in a landslide given the heavy concentration of black voters in swing states. Remember, he won in 2016 with just 8% support nationally among black voters.

The great imponderable was–yes, taken at face value and coinciding recently with President Trump’s approval rating among an aggregate of likely/registered voters–it is safe to say there has been a concomitant rise in his approval among black voters.

But was there any indication of how this approval rating might translate into actual votes?

There is such an indication now.

Nate Silver’s 538.Com lists daily all available Trump approval polls his site considers worthy of inspection. One such listed as a registered voters poll of 1000 voters for the period February 23-24 is the D-CYFOR poll, an international firm that surveys the United States and United Kingdom.

The firm states it is, “A member of the United States Public Opinion Research and the Market Research Association” among other professional bodies.

D-CYFOR gauged Trump’s overall approval at 43%, which puts it well within the aggregate of all other polls. On Real Clear Politics his aggregate stands at 44%. So, there is apparent credibility on that score. But deeper than the toplines, the breakdown by individual voting segments perhaps provide some unique statistics.

Trump’s approval is 16% among registered black voters, which once again matched previous research over a long period. D-CYFOR also asked about the generic ballot.

The result among black voters:

Interestingly, the 11% Republican support and 5% undecided is almost identical to what the polling aggregate shows. But leaving that aside, the key point is even if the 11% translated into actual Election Day votes, then Trump would likely be on course for a landslide.

Three points higher than the 8 points he received in 2016 if it eventuated could shore up Michigan, Ohio, Wisconsin, Florida, North Carolina and possibly flip Minnesota.

There can be many reasons for this increase in black and Hispanic support, not least of which presiding over an economy that hit the lowest unemployment level in history for both demographic groups.

His outreach to blacks in general included some high profile pardons, while pushing and signing the popular criminal justice reform bill refutes of the obvious media falsehood that he is an abject racist.

No doubt it is the sum of those reasons and more that account for his rise in black support. The bottom line is that even if the 11% turns into Election Day reality, the Democratic Party and its previous multi-generational hold on the black vote would be facing an electoral disaster.