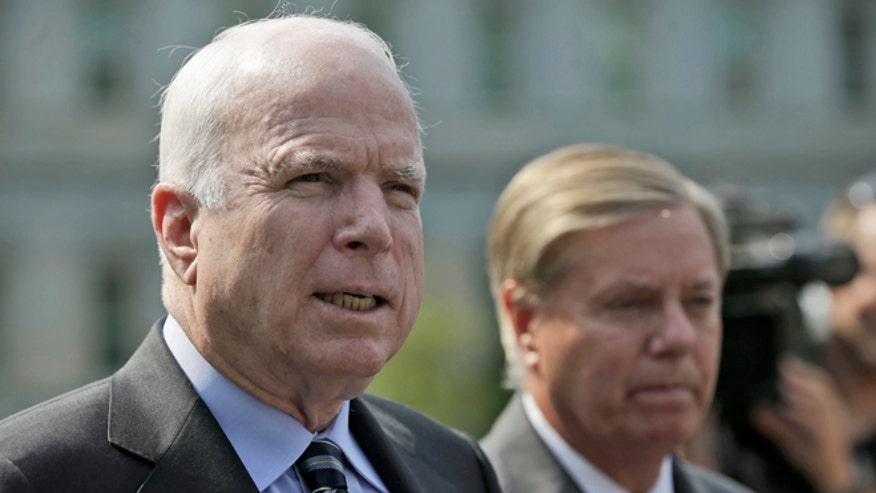 Sen. John McCain R-AZ, President Obama’s best hope for GOP support for a strike in Syria, said Wednesday that he will not support the Senate’s draft resolution authorizing the use of force agreed upon earlier in the morning.

“There are a number of people who are unhappy,” McCain told reporters on Capitol Hill. Asked if he supported the measure, McCain said, “In its current form, I do not.”

Of course, in its current form is the key phrase, but the decision is a setback for the administration’s effort to win swift support from Congress for an attack, nevertheless.

McCain, who has been advocating the need to kick-up U.S. involvement in the Syrian civil war for almost 2 years, said he opposes the resolution crafted by fellow Sens. Bob Menendez of New Jersey and Bob Corker of Tennessee. The resolution puts a 90-day limit on action and says no American troops can be sent to Syria.

McCain reportedly requested and desired more than cruise missile strikes and so-called “limited” action. He wants to tilt the direction of the civil war in the rebels favor, which requires more backbone, rather than a “shot across the bow.” Still, he doesn’t want combat troops on the ground in Syria.

The Arizona Republican threatened earlier this week to vote against a White House draft resolution unless Obama promised to support Syria’s rebels, totally. Following a meeting with Obama at the White House on Monday, McCain clearly indicated support for a broad plan for a U.S. response to the use of chemical weapons, although he stopped short of saying he supported a specific resolution.

The Senate Foreign Relations Committee could vote on authorizing the use of force as early as Wednesday afternoon, the first in a series of votes as the president’s request makes its way through Senate and House committees before coming before the two chambers for a final vote.

Obama: 'I didn't set a red line' in Syria 'the world did'