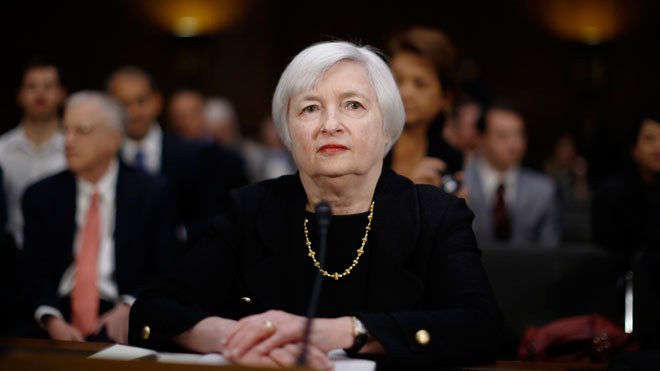 With the new Fed Chair Janet Yellen at the helm, monetary policy coming out of the Fed in the year 2014 will be just as predictable. As Dunstan Prial put it, “the playbook for the coming year basically consists of one play: scaling back, or tapering, the Fed’s monthly bond purchases, a program known as quantitative easing.”

Depending upon the economic data, particularly the labor market if you believe the Fed, the inflation-inducing purchase of bonds will either increase in scale, with larger quantities being purchased under pressure from a weakening economy, or lessened on news of stronger data.

But five years in to the recovery that never was for millions of Americans, is this monetary policy doing more harm than good?

We have to look no farther back in time than this morning to hear bad economic news, as a report released by the Institute for Supply Management said U.S. service sector growth slowed for a second straight month in December, with the pace of business activity expanding at a lower rate and new orders contracting.

The problem with quantitative easing: It hoses the little guy who is trying to save by holding interest rates down, while forcing investments in equity stocks that earn those who can afford to assume the risk associated with purchasing them in such high quantities, and ton of money.

It’s an inconvenient truth for an administration that hinges the survival of their party in the 2014 midterm elections on income inequality. Unfortunately, what would help the working American trying to accumulate wealth by saving his or her money would be a greater return on more suitable conservative investments. However, now with the confirmation of Janet Yellen, raising the key fed fund interest rate is not happening, or as Prial noted, “is off the table for the foreseeable future.”

The interest rate will stay where it is for as long as the Fed can hope to contain it, and the reason is simple: The housing market, which caused the financial crisis in 2007 to 2008, is nothing without almost zero interest rates. The fundamentals are not only weak, an unfortunate reality we are reminded of anytime the Fed even discusses raising interests rates, but the Fed and Washington seem hell-bent on repeating the bubble again.

In order to get people to purchase homes, the Fed has kept the interest rate (or, the cost of borrowing) next to nothing, while Washington politicians please lobbyists at the National Association of Realtors by supporting policies that make them rich and create economic crisis.

Thanks to the NAR lobbyists and their friends in Congress, the Federal Housing Administration is currently requiring just 3.5 percent for down payments, while Fannie and Freddie, yes those two, are requiring a dismal 5 percent. According to the American Enterprise Institute’s National Mortgage Risk Index data set for Oct. 2013, roughly half of home-buyers — excluding those seeking to refinance — only put 5 percent or less down.

How do we even know we are creating a bubble, again?

Economists measure housing bubbles by comparing current prices to another index — in this case, rental costs — which the United States Bureau of Labor Statistics has been tracking since at least 1983, showing a consistent increase of about 3 percent a year over the past 30-year period.

From 2011 to Q3 2013, housing prices grew by 5.83 percent, far above the comparable increase in rental costs, which was just 2 percent. It wasn’t until 2007 housing rated maintain an average compound growth rate of 6 percent, and then it collapsed.

It is a bit suspicious that Janet Yellen — a women whose career screams, “here big government, I have easy money for you” — was named to be the new Fed Chair after Larry Summers — who returned to Princeton to study why the Keynesian “stimulus package” failed — had “withdrawn” his name from consideration.

Add to that, Rep. Mel Watt (D-NC), who also will be sworn in Monday as director of the Federal Housing Financial Agency. Watt has the distinction of being behind a program that was his brainchild, which increased the number of mortgage loans issued to welfare recipients, allowing them to make a down payment with as little as $1,000 on a loan guaranteed by Freddie Mac.

Thus, in 2014, we can expect more of the same hologram capitalism and economic recoveries that never were, with a new manufactured crisis and leviathan creeping right over the horizon driven by those who now preach the moral imperative behind ending income inequality.