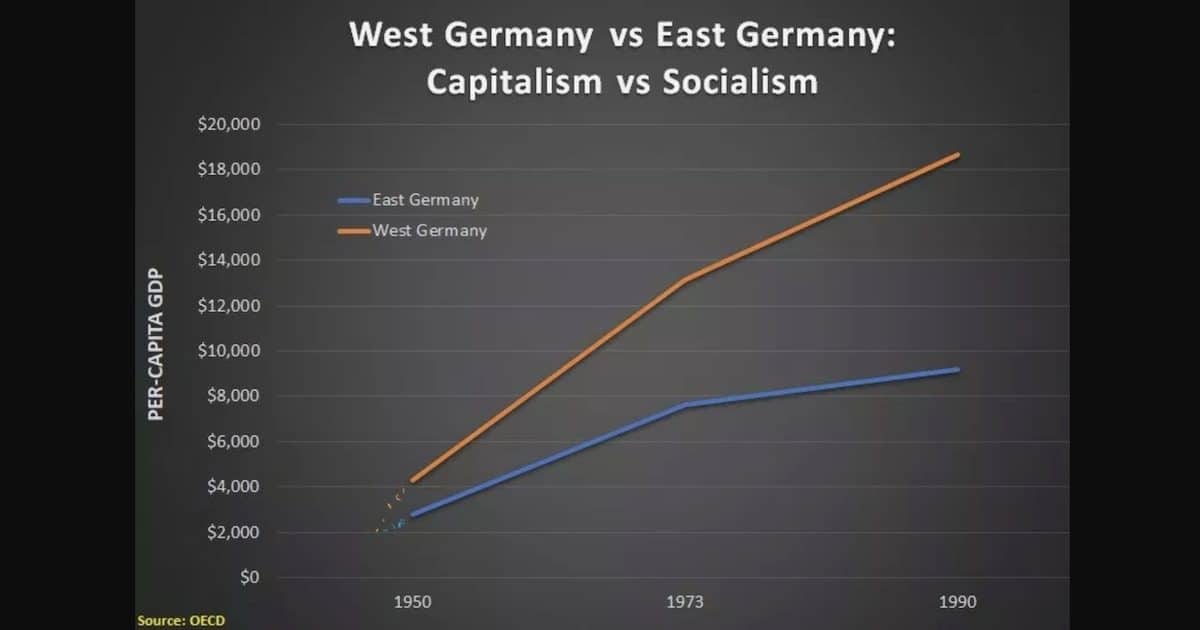 Donald Trump is an incoherent mix of good policies and bad policies. Some of his potential 2020 opponents, by contrast, are coherent but crazy.

And economic craziness exists in other nations as well.

In a column for the New York Times, Jochen Bittner writes about how a rising star of Germany’s Social Democrat Party wants the type of socialism that made the former East Germany an economic failure.

Socialism, the idea that workers’ needs are best met by the collectivization of the means of production… A system in which factories, banks and even housing were nationalized required a planned economy, as a substitute for capitalist competition. Central planning, however, proved unable to meet people’s individual demands… Eventually, the entire system collapsed; as it did everywhere else, socialism in Germany failed. Which is why it is strange, in 2019, to see socialism coming back into German mainstream politics.

But this real-world evidence doesn’t matter for some Germans.

Kevin Kühnert, the leader of the Social Democrats’ youth organization and one of his party’s most promising young talents, has made it his calling card. Forget the wannabe socialism of American Democrats like Bernie Sanders or Alexandria Ocasio-Cortez. The 29-year-old Mr. Kühnert is aiming for the real thing. Socialism, he says, means democratic control over the economy. He wants to replace capitalism… German neo-socialism is profoundly different from capitalism. …Mr. Kühnert took specific aim at the American dream as a model for individual achievement. …“Without collectivization of one form or another it is unthinkable to overcome capitalism,” he told us.

In other words, he wants real socialism — i.e., government ownership. And that presumably means he also supports central planning and price controls.

What makes Kühnert’s view so absurd is that he obviously knows nothing about his nation’s history.

Just in case he reads this, let’s look at the evidence.

Jaap Sleifer’s book, Planning Ahead and Falling Behind, points out that the eastern part of Germany was actually richer than the western part prior to World War II.

The entire country’s economy was then destroyed by the war.

What happened afterwards, though, shows the difference between socialism and free enterprise.

Before…the Third Reich the East German economy had…per capita national income…103 percent of West Germany, compared to a mere 31 percent in 1991. …Here is the case of an economy that was relatively wealthy, but lost out in a relatively short time… Based on the official statistics on national product the East German growth rates were very impressive. However, …the actual performance was not that impressive at all.

Sleifer has two tables that are worth sharing.

First, nobody should be surprised to discover that communist authorities released garbage numbers that ostensibly showed faster growth.

What’s really depressing is that there were more than a few gullible Americans – including some economists – who blindly believe this nonsensical data.

Second, I like this table because it confirms that Nazism and communism are very similar from an economic perspective.

Though I guess we should give Germans credit for doing a decent job on product quality under both strains of socialism.

For those who want to read further about East German economic performance, you can find other scholarly articles here, here, and here.

I want to call special attention, though, to a column by an economist from India. Written back in 1960, even before there was a Berlin Wall, he compared the two halves of the city.

Here’s the situation in the capitalist part.

The contrast between the two Berlins cannot miss the attention of a school child. West Berlin, though an island within East Germany, is an integral part of West German economy and shares the latter’s prosperity. Destruction through bombing was impartial to the two parts of the city. Rebuilding is virtually complete in West Berlin. …The main thoroughfares of West Berlin are near jammed with prosperous looking automobile traffic, the German make of cars, big and small, being much in evidence. …The departmental stores in West Berlin are cramming with wearing apparel, other personal effects and a multiplicity of household equipment, temptingly displayed.

Here’s what he saw in the communist part.

…In East Berlin a good part of the destruction still remains; twisted iron, broken walls and heaped up rubble are common enough sights. The new structures, especially the pre-fabricated workers’ tenements, look drab. …automobiles, generally old and small cars, are in much smaller numbers than in West Berlin. …shops in East Berlin exhibit cheap articles in indifferent wrappers or containers and the prices for comparable items, despite the poor quality, are noticeably higher than in West Berlin. …Visiting East Berlin gives the impression of visiting a prison camp.

The lessons, he explained, should be quite obvious.

…the contrast of the two Berlins…the main explanation lies in the divergent political systems. The people being the same, there is no difference in talent, technological skill and aspirations of the residents of the two parts of the city. In West Berlin efforts are spontaneous and self-directed by free men, under the urge to go ahead. In East Berlin effort is centrally directed by Communist planners… The contrast in prosperity is convincing proof of the superiority of the forces of freedom over centralised planning.

Back in 2011, I shared a video highlighting the role of Ludwig Erhard in freeing the West German economy. Given today’s topic here’s an encore presentation.

Samuel Gregg, writing for FEE, elaborates about the market-driven causes of the post-war German economic miracle.

Seventy years ago this month, a small group of economists and legal scholars helped bring about what’s now widely known as the Wirtschaftswunder, the “German economic miracle.” Even among many Germans, names like Walter Eucken, Wilhelm Röpke, and Franz Böhm are unfamiliar today. But it’s largely thanks to their relentless advocacy of market liberalization in 1948 that what was then West Germany escaped an economic abyss… It was a rare instance of free-market intellectuals’ playing a decisive role in liberating an economy from decades of interventionist and collectivist policies.

As was mentioned in the video, the American occupiers were not on the right side.

…reform was going to be easy: in 1945, few Germans were amenable to the free market. The Social Democratic Party emerged from the catacombs wanting more top-down economic planning, not less. …Further complicating matters was the fact that the military authorities in the Western-occupied zones in Germany, with many Keynesians in their contingent, admired the economic policies of Clement Atlee’s Labour government in Britain. Indeed, between 1945 and 1947, the Allied administrators left largely in place the partly collectivized, state-oriented economy put in place by the defeated Nazis. This included price-controls, widespread rationing… The result was widespread food shortages and soaring malnutrition levels.

But at least there was a happy ending.

Erhard’s June 1948 reforms…abolition of price-controls and the replacement of the Nazi-era Reichsmark with much smaller quantities of a new currency: the Deutsche Mark. These measures effectively killed off…inflation… Within six months, industrial production had increased by an incredible 50 percent. Real incomes started growing.

And Germany never looked back. Even today, it’s a reasonably market-orientednation.

I’ll close with my modest contribution to the debate. Based on data from the OECD, here’s a look at comparative economic output in East Germany and West Germany.

You’ll notice that I added some dotted lines to illustrate that both nations presumably started at the same very low level after WWII ended.

I’ll also assert that the blue line probably exaggerates East German economic output. If you doubt that claim, check out this 1990 story from the New York Times.

The bottom line is that the economic conditions in West Germany and East Germany diverged dramatically because one had good policy (West Germany routinely scored in the top 10 for economic liberty between 1950 and 1975) and one suffered from socialism.

These numbers should be very compelling since traditional economic theory holds that incomes in countries should converge. In the real world, however, that only happens if governments don’t create too many obstacles to prosperity.