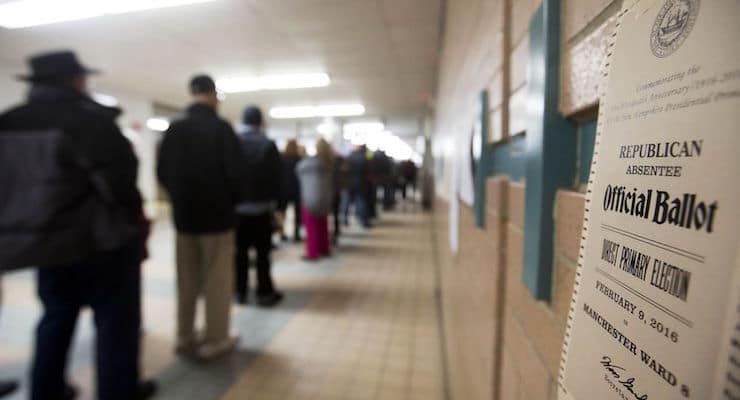 A ballot is posted to the wall as voters wait in line to cast their ballots for the New Hampshire primary at a polling place Tuesday, Feb. 9, 2016, in Manchester, N.H. (Photo: AP/David Goldman)

A Gallup poll showing three in four voters are giving “quite a lot” of thought to the upcoming election, a sign Election 2016 voter turnout could top 2008. Prior to the 2008 presidential election, which eventually saw voter turnout at the highest level in 40 years, a Gallup poll conducted at the end of May showed a level of interest similar to the levels measured this year.

Looking at the table above, we can see a clear correlation. In the 2000 and 2004 presidential elections, which were lower turnout elections, smaller percentages said in May that they had given quite a bit of thought to the election. Less than half of Americans in May 2000 said they were paying a lot of attention and the voter turnout rate was the third-lowest (only 1996 and 1988 were lower) since 1924.

In 2000, when George W. Bush defeated Al Gore, only a little more than half of eligible voters (51.2%) cast a presidential ballot.

There have been three other notable shifts in enthusiasm from 2008 to now, H/T Gallup:

That said, it is entirely possible that enthusiasm–for both parties–will rise further post-Labor Day, when voters typically begin to pay even closer attention to the race. In the last three presidential election cycles, enthusiasm within the parties hit there highs in the month before the election.

The survey data strengthens the argument supporting new voter participation and high turnout, as well as mirrors turnout in the primary contests. That is particularly true as it relates to Republicans. The presumptive nominee Donald J. Trump received more primary votes than any other candidate in the history of the party. He surpassed G.W. Bush’s record after the West Virginia Republican primary.