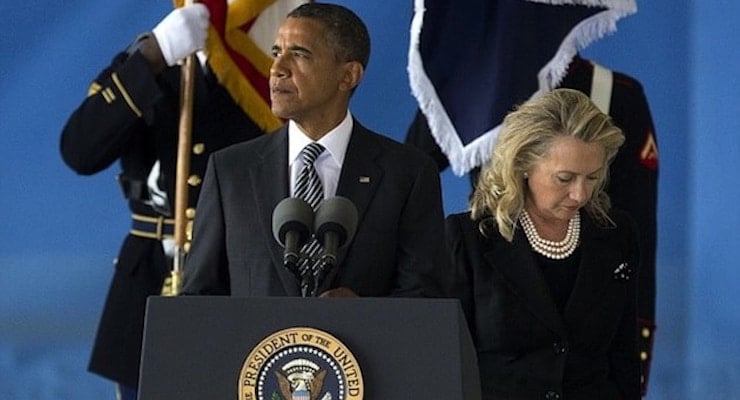 President Obama, left, and Hillary Clinton, right, at the ceremony for the victims of Benghazi on Sept. 14, 2012.

U.S. Ambassador Christopher Stevens and three other Americans–foreign service officer Sean Smith and former Navy Seals Tyrone Woods and Glen Doherty–were killed in the attacks. The families of the victims have been publicly criticizing Mrs. Clinton, among other administration officials, for lying to them about the cause of the attack (the YouTube video) and the events that transpired over the 13 hours.

In response, the former secretary of state said during an interview with her former employee-turned-journalist George Stephanopolous that the families were lying about her statements in the days after the attack. She later walked back her claims, instead blaming the “fog of war” for her statements, which she now again denies making.

During a press conference held by the Republican members of the committee on June 28, Rep. Jim Jordan, R-Ohio, flat-out said Secretary Clinton–now the presumptive Democratic nominee–deliberately misled the public on Benghazi. While explaining his view of what happened leading up to, during and after the night of September 11, 2012 when four Americans lost their lives in Benghazi, Libya from a terrorist attack, Rep. Jordan explained how Mrs. Clinton knew the YouTube story was a fabrication.

“At 10:08 that night with Tyrone Woods still on the roof of the annex fighting for his life, Secretary Clinton issues this statement; the official statement on Benghazi; the official statement of our government,” Rep. Jordan said. “‘Some have sought to justify this vicious behavior as a response to this inflammatory material on the Internet.’ We know that statement was misleading because an hour later she told her daughter ‘terrorists killed two of our people today’.”

In the end, the administration’s efforts to impede the investigation succeeded, but only in part. The minority members’ and their staff’s efforts to impede the investigation succeeded also, but again only in part. And although we answered many questions, we could not do so completely. What we did find was a tragic failure of leadership—in the run up to the attack and the night of—and an administration that, so blinded by politics and its desire to win an election, disregarded a basic duty of government: Tell the people the truth. And for those reasons Benghazi is, and always will be, an American tragedy.

The House Select Committee on Benghazi for the report interviewed more than 80 witnesses not previously called before Congress to testify or the State Department Accountability Review Board, including Ben Rhodes, the president’s deputy national security adviser for strategic communications. Rhodes, who with political adviser David Plouffe, prepped then-U.N. Ambassador Susan Rice for her infamous “Sunday Show” appearances on national television claiming the YouTube video was responsible for the terrorist attack.

“Oh yes, they all told me the reason that this happened was the video,” said Pat Smith, the mother of Sean Smith. “Every one of them told me that. Yes, they actually did, and Susan Rice also. Nose to nose. I was with – they were hugging me!”

Charles Woods, the father of Ty Woods, not only backed up the account but also wrote in his journal an entry validating the same experience. The families’ versions of events is further backed up by a transcript of Mrs. Clinton’s remarks the day in question just a few short days after the attack, the very same day the bodies were flown back to the U.S. and received.

“This has been a difficult week for the State Department and for our country,” she said at Andrews Air Force Base on Sept. 14, 2012. “We’ve seen the heavy assault on our post in Benghazi that took the lives of those brave men. We’ve seen rage and violence directed at American embassies over an awful internet video that we had nothing to do with. It is hard for the American people to make sense of that because. it is senseless, and it is totally unacceptable.”

Poll: A Majority of Voters Think Hillary Should've Been Indicted