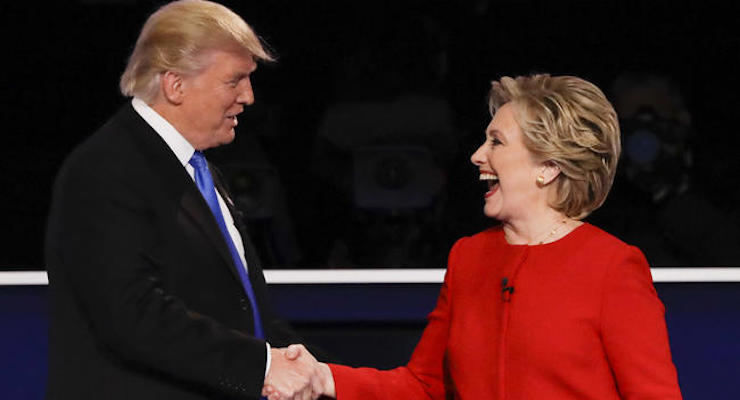 A Post Debate Poll conducted after the presidential showdown at Hofstra University finds Hillary Clinton put on the best performance, but Donald Trump won votes. While voters 47% to 44% think that Mrs. Clinton “won the first presidential debate,” Mr. Trump won over undecided voters who changed their mind by nearly a 3 to 1 margin.

Nine percent (9%) were undecided on the question of who won the debate.

Among those who were undecided (5%) before the debate, 31% changed their mind and now say they’ll support the New York businessman. By comparison, only 11% of previously undecided voters said they will now vote for the former secretary of state.

The results were noteworthy, considering more voters than not thought Mrs. Clinton gave a better debate performance. Authenticity, honesty and trustworthiness played and will continue to play a big role in voters’ preferences ahead of November.

“Voters are looking for Donald Trump to basically give them permission to vote for him, fair or not,” says PPD’s senior analyst Richard Baris. “If he improves in the next two debates, which he did during the primary, things could get really ugly really fast for Hillary Clinton.”

Regarding the debate, which most mainstream pundits gave to Mrs. Clinton, most voters expected her to be polished on stage. But they were watching to see if Mr. Trump could pass the presidential bar.

“He was restrained, He came off much more natural,” said Shaun Ellis, an independent voter from Hopington, New Hampshire. “Hillary looked weak on the economy,” adding he decided “we need new blood.”

Of course, not everyone agreed he met that bar. The good news for Mr. Trump and his supporters: the vast majority of those who don’t think he met that threshold are Democratic partisans.

“I’m supporting Hillary because of her history and experience,” said Dr. Joseph S. Johnson, an African-American Democrat from Centerville, Ohio, a key battleground state. “Hillary won the debate. Her grade was a B+ and Donald Trump’s temperament was awful. His grade–F.”

Mr. Trump has made a major play for black voters juxtaposed to previous GOP nominees and, while the PPP U.S. Presidential Election Daily Tracking Poll finds his support has increased from 5% in August to roughly 11% by the end of September, other public polls have shown he continues to struggle.

“Trump showed obvious passion and concern for the individual Americans he’s heard from in his rallies and campaigning,” said Tawonya L. Johnson, an African-American voter of Snohomish, Washington. “And this solidified my decision to vote Trump for President.”

“Having to choose a lesser evil, Donald is genuine,” said Kathleen Downing, an independent from Lincoln Park, Michigan. Ms. Downing describes herself as a moderate liberal, but she believes Mrs. Clinton “is a well-rehearsed performer” who “will say anything” to get elected.

Poll: Voters Say Debate Moderators, Like Reporters, Are in the Tank for Hillary Clinton