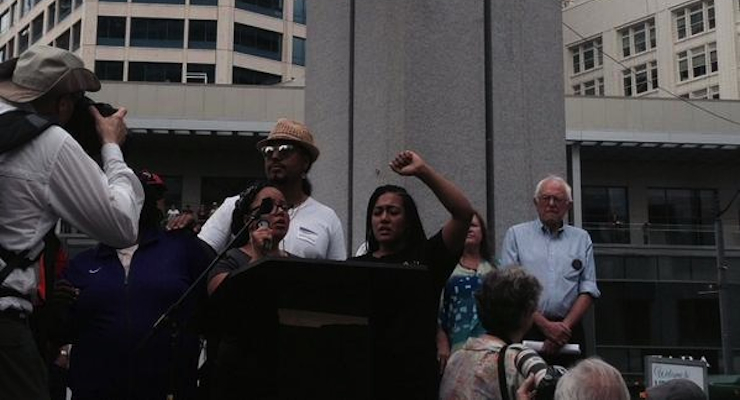 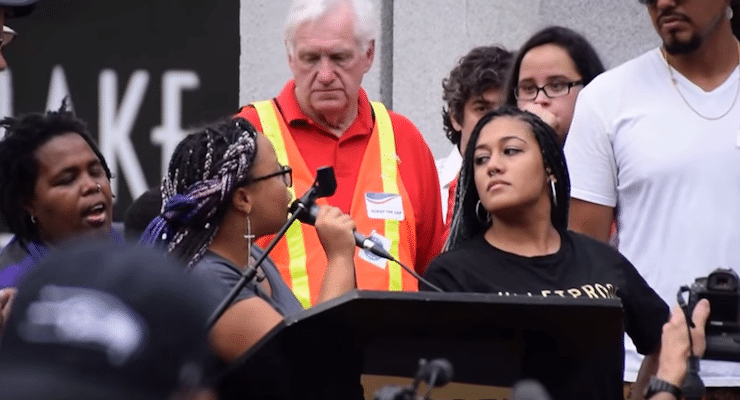 SEATTLE (AP) — Black Lives Matter activists interrupted Vermont socialist Sen. Bernie Sanders at an event in Seattle, Washington on Saturday afternoon. Marrisa Johnson and Mara Jacqueline Willaford, both members of the Black Lives Matter movement, hijacked the microphone and event in order to shout grievances, racist statements, and attempted to force Sen. Sanders and the crowd to observe the death of Michael Brown, the 18-year-old who was shot justifiably by former Ferguson Police Officer Darren Wilson after a confrontation.

It wasn’t long before the racial slurs started flying from Marrisa Johnson, a leader of the Black Lives Matter movement in Seattle, who was booed after she called the liberal crowd “white racists.”

“How dare you,” one women in the crowd can be heard shouting at Johnson, which was repeated by a man previously booing and shouting, “Get off!”

How did all of this unfold, before and after?

Sanders, a Democratic presidential candidate, who was shoved away from the podium and microphone by several Black Lives Matter activists, eventually left the event in Seattle without giving his speech. He had just starting to address another large crowd, numbers in the several thousands who gathered to stand shoulder-to-shoulder at Westlake Park, when two women took over the microphone.

Prior to Ms. Johnson’s very unwelcomed rant, Team Sanders trued to persuade them to wait until he was finished speaking in exchange for a chance to be heard following his speech. But that wasn’t good enough.

“If you do not listen to her, your event will be shut down right now!” one woman yelled at Sanders before he stepped back. “Let her speak or we shut it down!

“Let her speak or we shut it down!” another Black Lives Matter activist yelled. “Stop asking questions and let her speak now!”

The women spoke about Ferguson and the killing of Michael Brown and held a four minute moment of silence. After roughly 20 minutes, when the crowd was screaming for them to get off and allow the presidential candidate to speak, Sanders was physically pushed away as he tried to take hold of the microphone.

When the crowd asked the activists to allow Sanders to speak, one activist called the crowd “white supremacist liberals,” according to event participants.

Finally, he waved goodbye, left the stage with a raised fist salute and waded into the crowd. He shook hands with supporters and posed for photos for roguhly 15 minutes before leaving. The rally at Westlake Park was organized as a birthday celebration for Social security, Medicare and Medicaid.

This is the second time the Black Lives Movement has interrupted a campaign event. At a town hall for Democratic presidential candidates in Phoenix last month, protesters affiliated with the Black Lives Matter movement took over the stage and disrupted an interview with Sanders and former Maryland Gov. Martin O’Malley. When questioned on MSNBC, the movement’s leader said they would also do everything in their power to shut down the Republican National Convention in 2016.

Why is Higher Education So Expensive?