Obama O’Reilly Interview: ‘Not even A Smidgen Of Corruption’ In IRS Scandal 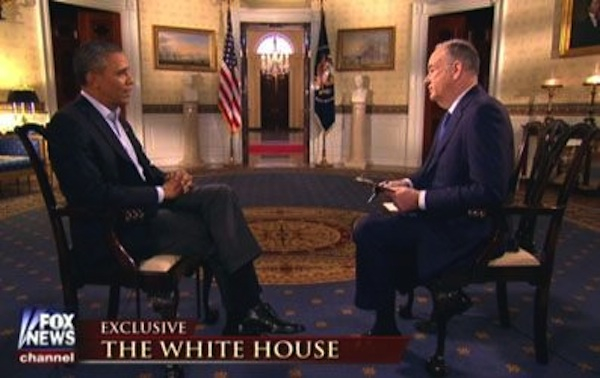 In an interview with Fox News’ Bill O’Reilly (view below), President Obama said he and his administration did not mislead the public on the Benghazi attack or the IRS scandal, claiming “not even a smidgen of corruption” was involved.

The president vehemently rejected the obvious political reasons that the IRS targeted Tea Party groups who were seeking tax exemption.

“That’s not what happened,” he told O’Reilly, claiming IRS officials were confused about how to implement the law governing those kinds of tax-exempt groups.

“There were some bone-headed decisions,” Obama said.

Obama conceded that then-IRS Commissioner Doug Shulman had visited the White House more than 100 times, including in the days before the decision to target the conservative groups was made, but Obama actually said he couldn’t recall speaking to him on any of those occasions.

Obama also downplayed the controversy over how the September 11, 2012, Benghazi attacks were characterized by the administration. Rather than offering an explanation for why Susan Rice and other administration officials would scapegoat a video several weeks after the attack, even going so far as to arrest the man who made an anti-Muslim video, he instead chose to focus on the security failure.

“All of the security precautions that needed to be taken didn’t happen,” the president said. “The key is that we’ve implemented the reforms that have been recommended.”

He said his administration was attempting to “hide the ball” regarding the Benghazi attack, or the cause for the attack, in which 4 Americans were killed including Ambassador Chris Stevens.

“We revealed to the American people exactly what we understood at the time,” the president said.

Obama also claimed that the attackers were made up of a mix of people, some affiliated with terror organizations and those he said were just “troublemakers.” A recent report from the Democratic-controlled Senate Intelligence Committee, however, definitively stated that individuals tied to Al Qaeda groups were involved in the attack, which did not occur because of a video.

He said he considers any such strike an act of terror and that he was told by then-Defense Secretary Leon Panetta at the time only that it was an “attack,” and that the more important issue is whether security lapses have now been fixed. Testimony from General Ham, however, confirmed that Panetta was told just before speaking with the president that night that the attack was a terrorist attack, and never was a video discussed as a potential cause.

In addition to Benghazi and the IRS scandal, the Super Bowl Sunday interview also hit on the failed launch of HealthCare.gov.

Obama said he did anticipate problems with the rollout of ObamaCare in October, particularly with the HealthCare.gov website because computer programs have “glitches.”

“But neither I nor anybody else anticipated the degree of problems with HealthCare.gov,” he said.

The president argued that total enrollment is now just about a month behind schedule and that young people, key to making ObamaCare work, are enrolling at a good rate.

However, he would not answer when asked repeatedly why he kept Health and Human Services Secretary Kathleen Sebelius on the job.

“I try to focus not on the fumbles but on the next play,” he said.

Watch the Obama O’Reilly interview below: