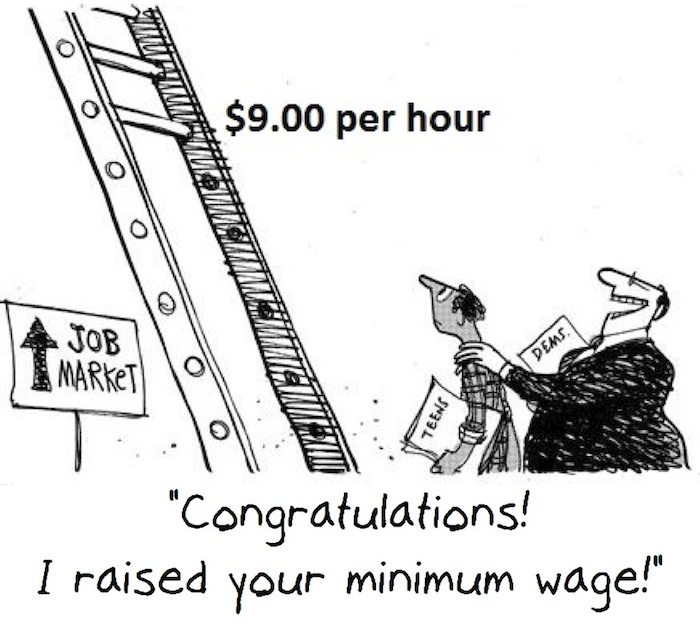 Democratic House members gathered at their annual retreat to talk midterm strategy, which included a minimum wage increase and income inequality. But a new CBO report says the plan by President Obama and fellow Democrats to increase the minimum wage to $10.10 an hour would cost at least 500,000 jobs.

Ironically, the other “top” issue at the retreat was unemployment. However, this is the second Congressional Budget Office report this month that found a Democratic policy will cost the American economy more jobs it does not have to lose. On Feb. 4, a CBO report projected that at least 2.3 million jobs will be destroyed due to the president’s and Democrats’ health care law, because ObamaCare provides incentives for people not to work.

Democrats immediately turned to the report’s findings that a minimum wage increase will increase wages for roughly 16.5 million Americans. Yet the report and the Democrats were immediately met with harsh Republican criticism.

“While helping some, mandating higher wages has real costs, including fewer people working,” said a spokesman for House Speaker John Boehner (R-OH). “With unemployment Americans’ top concern, our focus should be creating — not destroying — jobs for those who need them most.”

The CBO report said, however, their estimate of jobs destroyed was approximate, and that the actual economic impact could be a disastrous net loss of one million jobs.

The president reiterated his plan to increase the minimum wage, which he has already done for federal employees through executive fiat, only hours before the release of the new CBO report.

The White House was quick to respond to the report, albeit with inaccurate statements from Jason Furman, the chairman of the White House Council of Economic Advisers and one tasked with spinning the ObamaCare report earlier this month. Furman unbelievably told reporters on a conference call that the,“CBO’s estimate doesn’t reflect the overall consensus view of economists who say [the increase] would have minimum or no impact on employment.”

But the economic reality is far different, with the data conclusively proving that past minimum wage increase efforts have destroyed jobs, and will again if implemented in the future. A study conducted by the government’s own Department of Labor concluded that the first minimum wage, which was 25 cents per hour in 1938, cost the jobs of 30,000 to 50,000 of the 300,000 workers who were covered and had previously earned below the minimum.

Yet, Furman said the report is “essentially confirming the consensus” that such a minimum wage increase would reduce poverty and overall increase wages for moderate-to low-income families.

The CBO report is “essentially confirming the consensus,” just not in the manner that Furman suggests. In fact, a 2007 review of 102 studies that were conducted beginning in the 1990s by David Neumark and William Wascher found, “Indeed, the preponderance of the evidence points to disemployment effects.”

Still, despite the polling showing Americans favor an increase, Republicans argued the report puts conclusive weight behind their argument, which is the harder but correct argument to make. An increase would cut jobs, just as Bill Gates painfully told MSNBC earlier in the month,  because companies would have to spend more on wages.

The CBO report couldn’t have been released at a less opportune time for the president, as the Democrat-controlled Senate is gearing to debate an Obama proposal to increase the $7.25 hourly minimum wage to $10.10 by the year 2016.

However, the proposal faces long odds of passing in the GOP-controlled House.

Sen. Tom Harkin, D-IA, who is the author of the Senate legislation, outrageously cited other liberal think-tank research claiming that a higher minimum wage would create jobs, not reduce them.

“And as the CBO report affirms, an increase in the minimum wage will help lift families out of poverty,” he said.

The report also states 900,000 fewer people would be living below the federal poverty line, however, the report presupposes the effects take place in an economic vacuum. Of course, no market mechanism takes place in such an environment, which is why we have the law of unintended consequences in any form of economy.

It is also the reason the CBO report amending their findings of ObamaCare was necessary, because they estimated the effect of the law in a vacuum, not reality, the first time in 2010. The congressional analysts also examined a proposal similar to Harkin’s and focused on the plan’s impact in late 2016, when it would take full effect.

After 2016, Harkin’s bill would require the minimum wage to be increased annually to reflect rising inflation.

The report said that besides increasing wages for people earning less than $10.10 hourly, some people making more than that amount would also see higher earnings as bosses adjust their pay scales upward, which is where the vacuum comes in. As employers adjust those earnings to compete with other companies for needed employees, they shed jobs to cover the costs.

Democrats really are running in 2014 on the party platform filled with policy proposals that kill American jobs.

Winter Blamed For Steepest Drop In Housing Starts Since February 2011