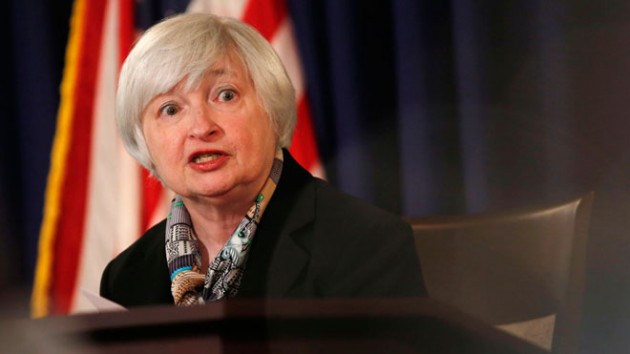 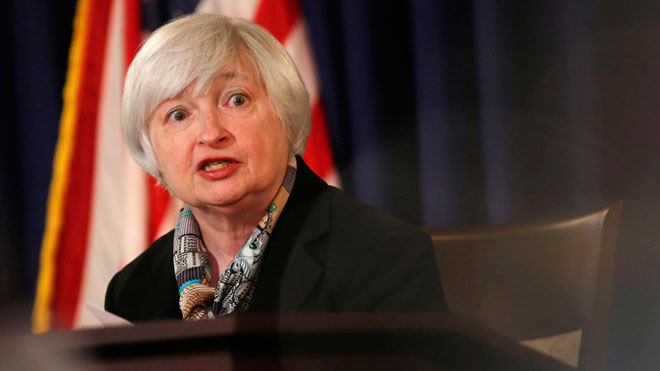 Though the Dow recovered a good deal of those losses, the markets were obviously shaken by Yellen’s comments, which were surprisingly specific.

Earlier Wednesday, the Federal Open Market Committee voted to reduce the Fed’s asset purchases to $55 billion per month, cutting $10 billion from its bond-buying program for the third time in as many meetings.

The move was widely expected, but another particular in the Fed announcement was not.

The Fed said that it changed its guidance for when it will increase interest rates from the now-record lows following its two-day policy-setting meeting. The central bank will look at a “wide range” of economic measures, rather than setting an explicit jobless rate target of 6.5 percent.

The Fed also said it will shave back its asset purchases by $10 billion a month to $55 billion a month beginning in April. With the unemployment rate nearing 6.5 percent due to absent worker participation, and real unemployment up over 12 percent, the FOMC removed that threshold for when it may begin to raise the target rate.

“In determining how long to maintain the current 0 to ¼ percent target range for the federal funds rate, the Committee will assess progress – both realized and expected – toward its objectives of maximum employment and 2% inflation,” the FOMC said in its statement.  “This assessment will take into account a wide range of information, including measures of labor market conditions, indicators of inflation pressures and inflation expectations, and readings on financial developments.

In her debut press conference, Yellen said she has never considered the headline unemployment rate alone to be a “sufficient” gauge for the health of the overall labor markets. Further, she said she looks at other labor indicators as well, including the broader U6 rate, which stands over 12 percent and includes people not currently looking for work, as well as the labor participation rate.

There hasn’t been so few Americans looking for work since the 1970s.

“It’s appropriate to look at many more things,” she said.

The Fed had previously said it would begin to raise the fed fund rate “well past” the time unemployment falls to 6.5 percent.  Though with the unemployment rate now near that level, the Fed said it would be appropriate to maintain its historically low rate “for a considerable time after the asset program ends” and even as “employment and inflation are near mandate-consistent levels, economic conditions may, for some time, warrant (it).”

As for its asset purchases, beginning in April, the Fed will buy $25 billion of agency mortgage-backed securities and $30 billion of longer-term Treasury securities.

After concluding its two-day meeting, the Fed also tweaked its economic forecasts.  It now expects the unemployment rate this year to settle between 6.1 percent and 6.3 percent — though that’s because of the amount of Americans who have quit on looking for work, or the American dream — and gross domestic product is expected to increase slightly to 2.8 percent to 3 percent.

However, they also now expect longer-run inflation to rise at 2 percent, which will prove difficult for many Americans due to the lack of income gains.

In December, the Fed expected longer-run inflation to remain unchanged.

Narayana Kocherlakota, the president of the Federal Reserve Bank of Minneapolis, voted against the policy over concerns the Fed is not committed to its 2 percent inflation target.

Yellen said in her press conference that the Fed is “closely monitoring” the situation in the Ukraine, but that U.S. financial interests haven’t been significantly impacted yet by the situation brought about by Russia’s aggressive push to annex the Crimea.