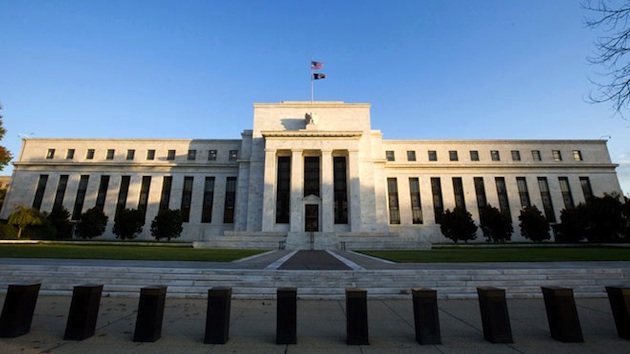 The Federal Reserve’s policy-setting body announced Wednesday it will end its money-printing, bond-buying program known as quantitative easing, despite recent news. The Fed will phase out the program this month, and also said it will continue to try to keep interest rates low for a “considerable time” to stimulate the economy.

The Fed went on to credit itself with whatever improvement in the labor market since the financial crisis, regardless of the historically low number of people in the labor force, stagnant wages and decreasing work weeks.

There has been much speculation in recent weeks that labor market volatility and slowing economic growth might prompt members of the Federal Open Markets Committee (FOMC) to delay ending the monthly purchasing program. Now, whispers that the Fed underestimated the danger of runaway inflation, which resulted in this decision, are growing in volume.

The committee stated there has been “substantial improvement in the outlook for the labor market since the inception of its currency asset purchase program” and “continues to see sufficient underlying strength in the broader economy.”

Earlier this year, it began tapering the monthly purchases as the unemployment rate declined and inflation remained tame. With this latest two-day policy meeting, the FOMC said it will conclude purchases of longer-term Treasury and mortgage-backed securities in October with a final round of $15 billion.

Despite the volatility and global growth worries, the committee reinforced its expected timeline of increasing interest rates in the middle of next year. Since the FOMC’s September meeting, the Bureau of Labor Statistics reported that the economy created 248,000 jobs last month and that unemployment registered less than 6% for the first time since July 2008.

The Fed had been citing what they call “slack” in the labor market to justify keeping stimulus policies in place. However, according to the October statement, the Fed now believes that slack is tightening.

The Fed statement also said “inflation running persistently below 2% has diminished somewhat since early this year.” Yet, come economists are alarmed that the Fed may anticipate the same future inflation others have warned about since the progam was initiated.

Minneapolis Federal Reserve Bank President Narayana Kocherlakota, an inflation dove, unexpectedly voted against the policy statement, calling instead for a continuance of the bond-buying program. The Fed claims they want inflation to climb higher to around the 2 percent target rate, fueled by a push from higher rising wages, but that has not come to fruition. In fact, the economy has not met the standard previously outlined by the Fed to consider ending the program.

Yellen, an inflation dove, repeatedly said the Fed won’t raise interest rates until the economy is at full employment and price stability was achieved. The Fed has defined that an unemployment range of 5.2 – 5.6 percent and an inflation range of 1.7 percent and 2 percent.

None of those marks have been hit.