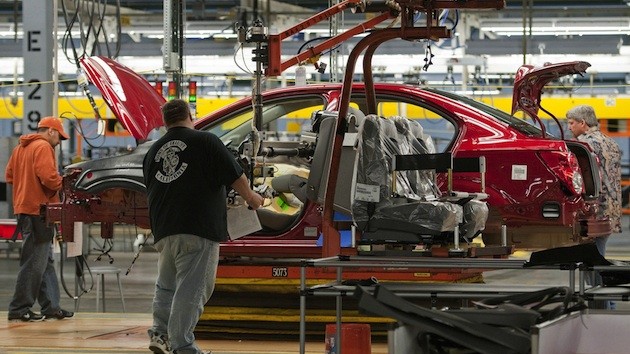 General Motors (NYSE:GM) and Chrysler Group both forecasted a seasonally-adjusted annual rate of greater than 17 million units for the entire industry.

Chrysler Group, the U.S. division of Fiat Chrysler Automobiles (NYSE:FCAU), were at the top sporting a 20 percent increase in new vehicle sales, beating forecasts from both Kelley Blue Book and Edmunds.com.

GM clocked in with its best November sales since the 2007 U.S. recession, pushing out 225,818 vehicles for a 6.5 percent increase year-over-year.

“The buzz around Black Friday helped drive strong showroom traffic but there was a lot more at work in the market,” said Kurt McNeil, GM’s U.S. vice president of sales operations. “More people have jobs and job security, their wages are starting to increase, household wealth is growing and low pump prices look like they’re here to stay through 2015.”

Ford Motor Co. (NYSE:F) said they had another downbeat month, but that “the overall sales decline was anticipated.” The company expected the variance in sales as they manage inventory levels of the F-150 ahead of the new truck’s launch. The first 2015 F-150s are expected to reach dealers by the end of the year.

Ford will be “working through the transition for the next several months,” said John Felice, Ford’s vice president of U.S. marketing, sales and service.

Detroit’s second-largest automaker reported a 1.8 percent decline in U.S. sales, though they realized increased sales from their luxury brand — Lincoln. Ford sold a total of 187,000 vehicles, which is down from 190,449 units a year earlier.

Ford is also rolling out the new Mustang, which was revamped for 2015. The Mustang’s monthly sales came in strong, posting the best November result in eight years. Ford said Mustangs are selling in just eight days on average after arriving at dealers.