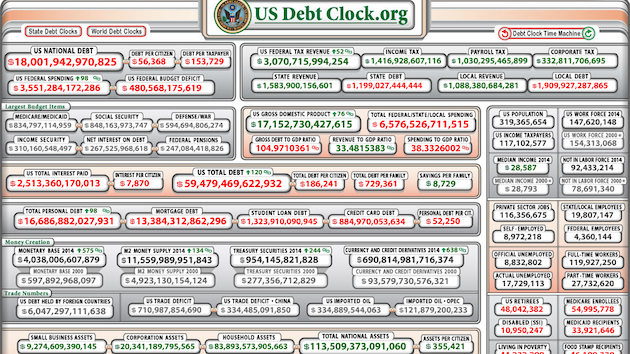 The U.S. national debt hit $18 trillion for the first time on Friday, according to the U.S. Treasury Department and a website that tracks liability debt and assets. The increase over the pivotal early shopping day represented a jump of more than $40 billion from two days prior.

The Congressional Budget Office released two startling reports in April showing crippling levels of U.S. national debt under the status quo and President Obama’s proposed budget. While the White House frequently touts recent deficit reductions, the claim is misleading for several reasons. It is only in the short-term that budget deficits are projected to decrease, but in the long-term they are projected to explode.

“Such high and rising debt would have serious negative consequences,” the CBO said. “Federal spending on interest payments would increase considerably when interest rates rose to more typical levels. Moreover, because federal borrowing would eventually raise the cost of investment by businesses and other entities, the capital stock would be smaller, and productivity and wages lower, than if federal borrowing was more limited.”

Second, debate over deficit reduction just scratches the surface of a larger problem, which consists mainly of debt-to-GDP ratios. In other words, under Obama, the economy has not grown at historical levels, leaving total U.S. debt a far larger percentage of the overall gross domestic product than it has been traditionally.

The CBO projected total federal debt held by the public will hit 78 percent of GDP by 2024, which is up from 72 percent at the end of 2013 and roughly double historical levels. Total federal debt has averaged 39 percent in the past four decades, and as recently as the end of 2007, the national debt equaled just 35 percent of total GDP. Yet, even under President Obama’s most recent proposed budget, the levels of spending are just not sustainable.

However, the situation is actually worse when debt assessors factor in the political reality, which as of now, is total paralysis, cowardess among politicians and Fed policy-makers. Furthermore, the recent decision by the Federal Reserve to end its bond-buying, money-printing scheme known as quantitative easing, will also have an impact on the national debt, as the policy simply prolonged the inevitable rise of interest rates, which will increase the cost of servicing the debt.

“In addition, high debt means that lawmakers would have less flexibility than they otherwise would to use tax and spending policies to respond to unexpected challenges,” the CBO added. “Finally, high debt increases the risk of a fiscal crisis in which investors would lose so much confidence in the government’s ability to manage its budget that the government would be unable to borrow at affordable rates.”

The CBO projections are actually deflating real debt because, as was previously reported in June, the agency said it can no longer stand by its original claim that ObamaCare — or, the Affordable Care Act — is a deficit neutral program.

“CBO and JCT can no longer determine exactly how the provisions of the ACA that are not related to the expansion of health insurance coverage have affected their projections of direct spending and revenues,” the CBO wrote in a tiny footnote. “The provisions that expanded coverage established entirely new programs or components of programs that can be isolated and reassessed. Isolating the incremental effects of those provisions on previously existing programs and revenues four years after enactment of the ACA is not possible.”

When President Obama took office, total national debt stood at a still-significant $10.626 trillion, and it’s risen nearly $7.5 trillion during Obama’s tenure. Despite the oft-heard claim that bailouts occurred under President George W. Bush and carried over into Obama’s tenure, the sum total for those amounts represent under 10 percent of the total federal debt increase realized under Obama.