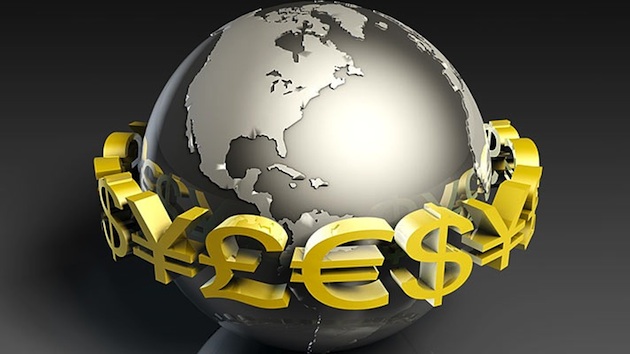 Last September, I wrote that America’s business tax system is a nightmare that simultaneously undermines the competitiveness of American companies while also causing lots of irritation in other nations.

Both of those bad things happen because politicians in Washington think the IRS should be able to tax income that is earned (and already subject to tax) in other countries. This approach, known as “worldwide taxation,” is contrary to good tax policy.

Indeed, all good tax reform plans, such as the flat tax, are based on “territorial taxation,” which is the common-sense principle that governments should only tax activity inside national borders.

Given the self-inflicted wound of worldwide taxation, particularly when combined with the world’s highest corporate tax rate, it’s easy to understand why some companies engage in “inversions” and become foreign-domiciled firms. Simply stated, that’s their best option if they care about the best interests of their workers, customers, and shareholders.

Well, the same problem exists for households. And it exists for the same reason. The United States also imposes “worldwide taxation” on individual taxpayers. But it’s even worse, because there are specific laws, such as the infamous Foreign Account Tax Compliance Act, that impose absurdly high costs on Americans with cross-border economic activity, particularly those who live and work in other nations.

And just as our senselessly punitive corporate tax system drives corporations to re-domicile, the same is true for the personal tax code. As CNN reports, record numbers of Americans are officially giving up their citizenship.

The number of Americans choosing to give up their passports hit a record 3,415 last year, up 14% from 2013, and 15 times more than in 2008, when only 231 people renounced their citizenship. Experts say the recent surge is coming from expats who no longer want to deal with complicated tax paperwork, a burden that has only gotten worse in recent years. Unlike most countries, the U.S. taxes all citizens on income, no matter where it is earned or where they live. The mountain of paperwork can be so complicated that expats are often forced to fork over high fees to hire an accountant… “More and more are considering renouncing,” said Vincenzo Villamena of Online Taxman, an accountant who specializes in expat taxes. “There are a lot of uncertainties about FATCA…I don’t think we’ve seen the full effect that FATCA can have on people’s lives.” As both expats and financial institutions rush to understand the new law, some banks have chosen to kick out their Americans clients rather than comply. If a bank mistakenly fails to report accounts held by Americans outside the U.S. — even checking and savings accounts — they can face steep penalties.

Here’s a chart from the CNN article. 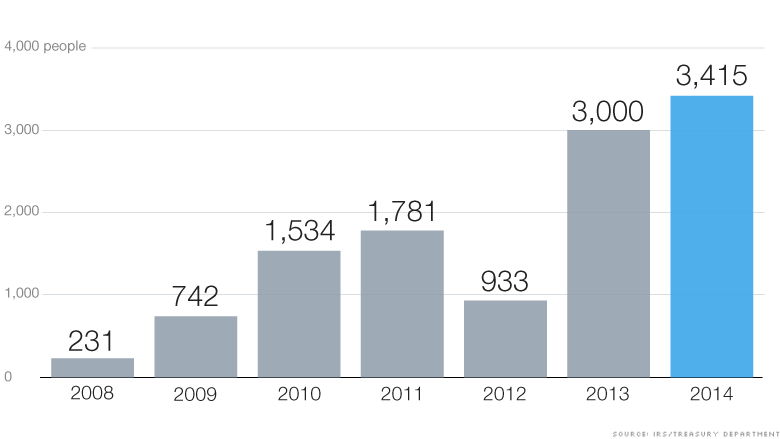 As you can see, there was a pause in 2012, perhaps because people were waiting to see what happened in the election.

But ever since, the number of people escaping U.S. citizenship has jumped dramatically.

To better understand how bad tax law is hurting people with U.S. passports, let’s look at the plight of Americans in Canada, as reported by the Vancouver Sun.

…many Ameri-Canadians are feeling rising anger, fear and even hatred toward their powerful country of origin. …The U.S. is the only major country to tax based on citizenship, not residency. …open displays of American pride in Canada are becoming even less likely as Ameri-Canadians seek shelter from the long reach of FATCA. …In addition, the flow of Americans leaving the U.S. for Canada more than doubled in the decade up until 2011, according to Statistics Canada. …Now — with FATCA causing investigators to scour the globe to hunt down more than seven million broadly defined “U.S. persons” it claims should be paying taxes to Uncle Sam — even more people in Canada with U.S. connections are finding another reason to bury their American identities.

Now let’s be even more focused and look at the impact on a single Englishman who happens to be the Mayor of London.

Johnson was characteristically forthright, describing FATCA as “outrageous”, and a “terrible doctrine of taxation.” Born in New York and having never given up his US citizenship, the London mayor cannot escape the clutches of FATCA, which requires that foreign financial institutions report the financial information of Americans. Those affected include many so-called “accidental Americans” like Johnson… What has seemingly brought FATCA to the front of Boris’s mind is the sale of his UK home, on which he is liable to pay tax in America. …What it does do – because of its host of serious, unintended, adverse consequences – is brand Americans, and accidental Americans choosing to live or work overseas, as financial pariahs. …Similarly, American businesses working in international markets are now often branded with a leprosy-like status. Clearly, this can only be detrimental to the country’s global competitiveness, and could, in turn, hit American jobs and the long-term growth of the economy. Questions should be asked about the imperialist characteristics of FATCA. Governments and foreign financial institutions have been coerced into complying with its expensive, burdensome, privacy-infringing, sovereignty-violating regulations by the US – or they have to face heavy penalties and the prospect of being effectively frozen out of US markets. And all this to “recover” an estimated $1bn (£637m) per year, which is enough, according to reports, to run the federal government for less than two hours.

As you can see, FATCA is a major problem.

And not just for specific taxpayers. The law is also bad for economic growth since it throws sand in the gears of global commerce.

Here are some excerpts from another news report, which includes some of my thoughts on the FATCA issue.

Critics say the FATCA has gone too far, is too draconian and is imposing an undue hardship on Americans living overseas. So says Dan Mitchell of the Cato Institute, a libertarian think tank in Washington. He says the law is “causing lots of headaches and heartaches around the world, not only for foreign financial institutions but also for overseas Americans, who are now being treated as Pyrrhus because financial institutions view them as too costly to service.” The U.S. is one of the few countries that tax its citizen on the basis of nationality, not residency. And faced with a larger tax bill, thousands of Americans living overseas would rather give up their passports then pay a new tax to Uncle Sam. The Taxpayer Advocate’s Office of the IRS has reported that the FATCA “has the potential to be burdensome, overly broad and detrimental to taxpayer rights.” Mitchell says, “An American living and working in some other country is required to not only pay tax to that country where they live but also file a tax return to the U.S. No other civilized country does that.”

By the way, I didn’t say that the law was causing overseas Americans to be treated as “Pyrrhus.” I said they were being viewed as “pariahs.” But that’s the risk you take when doing oral interviews.

Returning to matters of substance, you’ll also be happy to know that FATCA is making people more vulnerable to identity theft. It’s gotten so bad that even the IRS was forced to issue an official warning.

The Internal Revenue Service today issued a fraud alert for international financial institutions complying with the Foreign Account Tax Compliance Act (FATCA). Scam artists posing as the IRS have fraudulently solicited financial institutions seeking account holder identity and financial account information. …These fraudulent solicitations are known as “phishing” scams. These types of scams are typically carried out through the use of unsolicited emails and/or websites that pose as legitimate contacts in order to deceptively obtain personal or financial information. Financial institutions or their representatives that suspect they are the subject of a “phishing” scam should report the matter to the Treasury Inspector General for Tax Administration (TIGTA) at 800-366-4484, or through TIGTA’s secure website. Any suspicious emails that contain attachments or links in the message should not be opened.

Gee, nice of them to be so concerned about potential victims.

Though perhaps it would be better if we didn’t have intrusive laws in the first place.

The law is even so destructive that the Associated Press reported that it might be used as a weapon against the Russians!

As the United States attempts to punish Russia for its actions in Ukraine, the Treasury Department is deploying an economic weapon that could prove more costly than sanctions: the Internal Revenue Service. This summer, the U.S. plans to start using a new law that will make it more expensive for Russian banks to do business in America. “It’s a huge deal,” says Mark E. Matthews, a former IRS deputy commissioner. “It would throw enormous uncertainty into the Russian banking community.” …beginning in July, U.S. banks will be required to start withholding a 30 percent tax on certain payments to financial institutions in other countries — unless those foreign banks have agreements in place… But after Russia annexed Crimea and was seen as stoking separatist movements in eastern Ukraine, the Treasury Department quietly suspended negotiations in March. With the July 1 deadline approaching, Russian banks are now concerned that the price of investing in the United States is about to go up. …For Russia, the penalties could be more damaging to its economy than U.S. sanctions, said Brian L. Zimbler, managing partner of the Moscow office of Morgan Lewis, an international law firm. …The 2010 law is known as FATCA.

As you can see, America’s worldwide tax system is bad policy, and it’s a nightmare for millions of innocent people thanks to ill-considered laws such as FATCA.

What’s really remarkable – in a bad way – is the complete lack of proportionality.

Back during the 2008 campaign, Obama claimed that laws like FATCA would generate $100 billion per year. From the perspective of tax collectors, that amount of money may have justified an onerous law.

But when the dust settled, the revenue estimators predicted that FATCA would bring in less than $1 billion per year.

In other words, the amount of money the IRS will collect is dwarfed by the damage to the overall economy and the harm to millions of taxpayers. Not to mention all the negative feelings against America that have been generated by this absurd law.

Yet very few politicians are willing to fight FATCA because they’re afraid that their opponents will engage in demagoguery and accuse them of being in favor of tax evasion. Senator Rand Paul is an admirable exception.

P.S. Since this has been such a depressing discussion, here is some good IRS humor to lighten the mood.