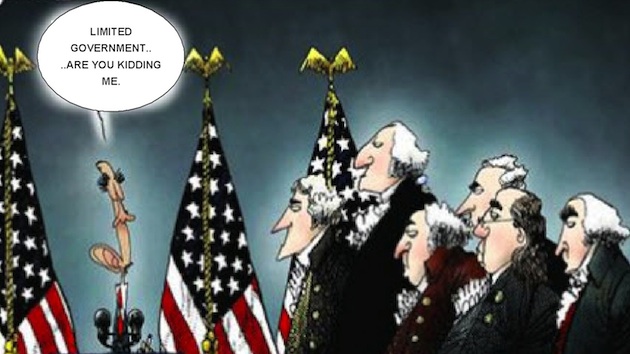 Monday, I gave a speech to some folks at London’s Institute of Economic Affairs about the failure of global financial regulation. I touched on some predictable themes:

The absence of cost/benefit analysis for regulatory initiatives.

The failure of anti-money laundering laws and their harmful impact on the poor.

How one-size-fits-all Basel rules led to imprudent risk and misallocation of capital.

How anti-tax competition schemes impose high costs on the financial system (which get passed on to financial consumers).

One thing I noticed, though, is that I didn’t get overly passionate when discussing these topics. I didn’t even get that worked up when talking about the OECD’s dangerous plan to create something akin to a World Tax Organization.

But I did get rather agitated when talking about how money-laundering rules and regulations have led to disgusting and reprehensible examples of so-called civil asset forfeiture.

This happens when a government decides to steal the property of citizens simply because they think it may have been involved in illegal activity.

Politicians and bureaucrats often use the failed Drug War as their rationale, but the activity doesn’t actually have to be illegal. I specifically cited the horrific example of the government stealing $35,000 from some folks in Michigan for no other reason than money from the family grocery business was generally deposited in amounts under $10,000.

I’m sure such government actions have a negative economic impact, but this is a case where the moral argument should take precedence.

Simply stated, all decent and humane people should stand united against thuggery by government.

And in an example of serendipity, after finishing my speech, I turned on my computer and came across more evidence against civil asset forfeiture.

Here are some truly disturbing passages from a report in the Detroit Free Pressthat showed up in my Twitter feed.

Thomas Williams was alone that November morning in 2013 when police raided his rural St. Joseph County home, wearing black masks, camouflage and holding guns at their sides. They broke down his front door with a battering ram. “We think you’re dealing marijuana,” they told Williams, a 72-year-old, retired carpenter and cancer patient who is disabled and carries a medical marijuana card. When he protested, they handcuffed him and left him on the living room floor as they ransacked his home, emptying drawers, rummaging through closets and surveying his grow room, where he was nourishing his 12 personal marijuana plants as allowed by law.

All this sounds horrible – and it is, but it gets worse.

They did not charge Williams with a crime… Instead, they took his Dodge Journey, $11,000 in cash from his home, his television, his cell phone, his shotgun and are attempting to take his Colon Township home. And they plan to keep the proceeds, auctioning off the property and putting the cash in police coffers. More than a year later, he is still fighting to get his belongings back and to hang on to his house. “I want to ask them, ‘Why? Why me?’ I gave them no reason to do this to me,” said Williams, who says he also suffers from glaucoma, a damaged disc in his back, and COPD, a lung disorder. “I’m out here minding my own business, and just wanted to be left alone.”

Why him? Well, one local attorney has a good idea of what’s really happening.

“It’s straight up theft,” said Williams’ Kalamazoo attorney, Dan Grow. “The forfeiture penalty does not match the crime. It’s absurd. …A lot of my practice is made up of these kinds of cases — middle-aged, middle-income people who have never been in trouble before. It’s all about the money.”

Just to be clear, Mr. Grow is emphasizing the utterly perverse incentive structure that exists when cops are allowed to steal money from citizens and use it to pad their own budget.

This system needs to be reformed.

And the second bit of serendipity is that a new report from the Institute for Justice showed up in my inbox. It explains why civil asset forfeiture should be abolished. And while the report focuses on the venal actions of the IRS, this reform should apply to all government agencies at all levels of government.

Civil forfeiture is the government’s power to take property suspected of involvement in a crime. Unlike criminal forfeiture, no one needs to be convicted of—or even a charged with—a crime for the government to take the property. Lax civil forfeiture standards enable the IRS to “seize first and ask questions later,” taking money without serious investigation and forcing owners into a long and difficult legal battle to try to stop the forfeiture. Any money forfeited is then used to fund further law enforcement efforts, giving agencies like the IRS an incentive to seize.

Here’s how IJ suggests that this type of abuse can be halted.

The surest way to prevent innocent people from losing money unjustly would be to end civil forfeiture and replace it with criminal forfeiture. Short of that, removing the financial incentive to seize, raising the standard of proof to forfeit and enacting other procedural reforms would help protect people from losing their bank accounts when the government has little or no proof of criminal wrongdoing.

While the Institute for Justice does great work, I don’t think they should have opened the door to halfway reforms.

Heck, even the two people who helped start up the Justice Department’s asset forfeiture program now say it should be abolished.

P.S. The Princess of the Levant is also in London, so I’m being forced to engage in tourist activities.

We took a ride on the London Eye, which wasn’t cheap but offers very good views of Big Ben, the House of Commons, Westminster Abbey, and other historic sites.

As far as I’m concerned, though, London is too cold and dreary. The only good tourism involves a warm beach in the Caribbean.

P.P.S. To close on a humorous note, here’s some anti-gun control humor with a rather pointed message.

Definitely worth adding to my collection.