The Laffer Curve vs. ISIS 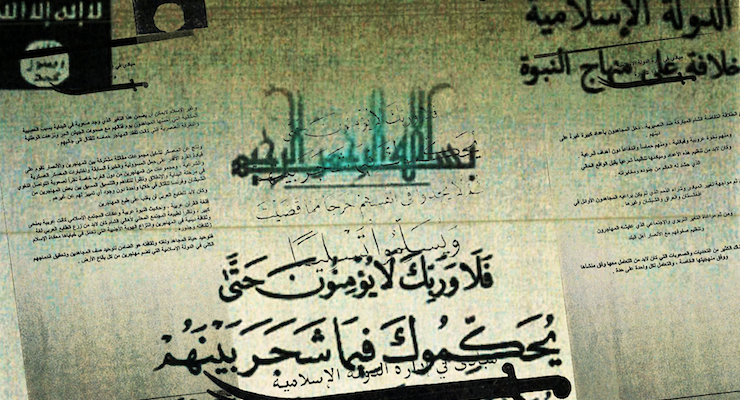 The leaked Islamic State document sets out a blueprint for a building an Islamic caliphate. (Photo: Guardian)

Based on my writings, some people may think I’m 100 percent against higher taxes. But that’s not exactly true. In some cases, I like punitive taxation. Or, to be more precise, I sometimes take pleasure when punitive tax policy backfires on bad people.

Here’s an example. An interesting article in Slate, authored by Adam Chodorow of Arizona State University Law School, looks at how a terrorist group’s attempt to form a government is being stymied by an inability to collect taxes.

Revolution is easy. Governing is hard. And there are few things more difficult than taxes. Operating a country requires money, and that typically requires taxes. … The population in this area is estimated to be between 7 million and 8 million, about the same as the population of Washington state. While ISIS currently collects about $1 billion annually, countries of similar size collect about $16 billion, suggesting that ISIS has a long way to go if it wants to operate like a real state.

But the comparatively low levels of tax are not because of a Hong Kong-type commitment to limited government.

Instead, the terror group is discovering that people don’t like giving their money to politicians and bureaucrats, even ones motivated by Islamic fundamentalism.

…taxes aren’t a great way to ingratiate oneself with the governed. …More than one government has fallen because of its tax policy. ISIS must face these challenges just as any emerging polity does… ISIS may have displayed prowess on the battlefield, but it has revealed that it is as stymied and constrained by the complexities of taxation as the rest of us. …ISIS’s taxes appear to be…no more popular in the territory it controls than they would be here in the U.S. As the Times reported, ISIS’s taxes are now so onerous that large numbers of people, who were apparently willing to tolerate ISIS’s religious authoritarianism, are fleeing Syria and Iraq to escape them. At some point people will either rise up or leave, threatening ISIS’s internal revenue source.

So taxes are becoming so onerous that taxpayers (and taxable income) are escaping.

Something I’ve written about one or two times. Or maybe 50 or 100 times.

ISIS is…constrained by a lack of administrative resources and the simple reality once sketched on the back of a cocktail napkin by the economist Arthur Laffer: that tax rates can only get so high before they actually drive down government revenues. Given current conditions, ISIS may be near or at the limits of its ability to tax, even if it can recruit jihadi tax accountants to its cause. Thus, …it’s not clear how much room the group has to grow internal revenues. More important, its efforts to do so may do more to damage its prospects than outside forces can accomplish.

This sounds like the tax equivalent of War of the Worlds, the H.G. Wells’ classic in which alien invaders wreak havoc on earth until they are felled by bacteria.

Tom Cruise was the star of a 2005 movie adaptation of this story, but I’m thinking I could rekindle my acting career and star in a movie of how the Laffer Curve thwarts ISIS!

But to have a happy ending, ISIS has to be defeated. And Professor Chodorow closes his article with a very helpful suggestion.

Rather than send in ground troops, …view our tax code as a weapon of mass destruction… We could make full use of it in the war on ISIS, perhaps by translating it into Arabic in the hopes that the group adopts it.

Sounds like the advice I gave about threatening Assad with Obamacare.

P.S. If they do decide to make a movie about the Laffer Curve and ISIS, maybe Obama could star as tax adviser for ISIS. At least if he’s not too busy in some of the other movie roles people have envisioned.

P.P.S. I like excessive taxes when they lead to the downfall of terrorist thugs. But I also take perverse pleasure when class-warfare tax hikes backfire in places such as France and the United Kingdom. I feel sorry for the taxpayers of those nations, to be sure, but it sometimes helps to have examples of what not to do.

(Editor’s Note: It’s not that Islamic State (ISIS) didn’t have a plan to implement tax policy. Indeed, a leaked ISIS manual shows the Islamic State has at least for one year had a detailed plan to establish a caliphate in Iraq and Syria, complete with a treasury department and an economic development program to sustain existence and growth.)