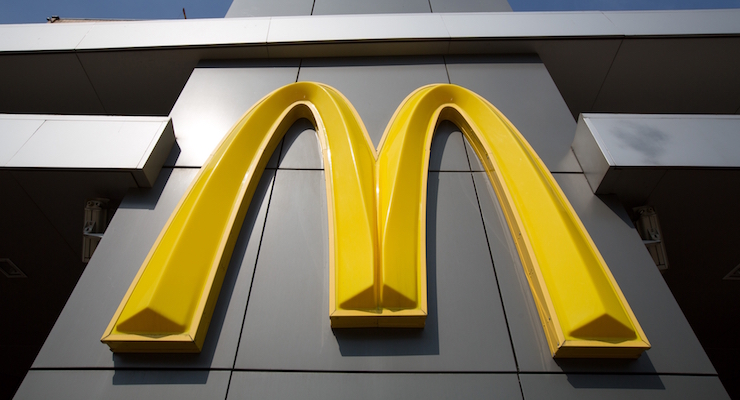 McDonald’s corporate headquarters is pictured in Oakbrook, Illinois, a suburb of Chicago. (Photo: AP), pushing shares up 3% in premarket trading. The earnings report topped economists’ expectations for profits of $1.23 a share on sales of $6.22 billion.

“We took bold, urgent action in 2015 to reset the business and position McDonald’s to deliver sustained profitable growth,” said McDonald’s President and Chief Executive Officer Steve Easterbrook. “We ended the year with momentum, including positive comparable sales across all segments for both the quarter and the year – a testament to the swift changes we made and the early impact of our turnaround efforts.”

Analysts on average had expected earnings of $1.23 per share, according to Thomson Reuters I/B/E/S.

“We enter 2016 committed to managing the business for the long term and aligned as a System around the critical imperative that we must run great restaurants each and every day for our valued customers,” Easterbrook said.

McDonald’s Corporation implemented a new plan to serve all-day breakfasts in its U.S. restaurants in October, a bid to attract more diners in the face of growing competition from rivals such as Chipotle Mexican Grill and Shake Shack. It was a resounding success to be sure, as the earnings data show. But the burger chain also posted solid numbers globally, as well.

“In November, we announced financial goals in conjunction with our business turnaround plan,” said Kevin Ozan, McDonald’s Chief Financial Officer. “We outlined specific targets to return about $30 billion to shareholders through a combination of dividends and share repurchases for the three-year period ending 2016, plans to refranchise about 4,000 restaurants by the end of 2018 and reduce our net annual G&A spending by $500 million, the vast majority of which will be realized by the end of 2017. These targets are designed to enhance long-term shareholder value while supporting the work underway to reignite our business results.”

“We are demonstrating that our turnaround plan is key to restarting growth and becoming a modern and progressive burger company,” Easterbrook added. “I am inspired by the dedication and collective determination of our U.S., International Lead, High Growth and Foundational markets to leverage our competitive strengths as they pursue their growth opportunities. As we enter 2016, we expect continued positive top-line momentum across all segments.”