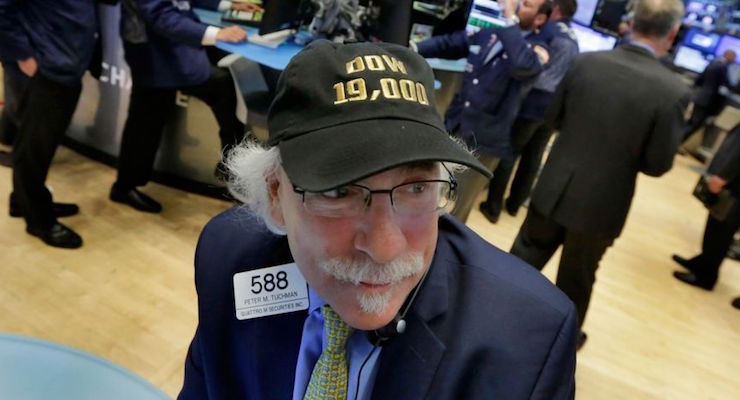 The Dow Jones Industrial Average (INDEXDJX:.DJI) closed above 19000 for the first time ever Tuesday as markets continue a post-election Donald Trump rally.

Despite the same dire predictions the British heard before the Brexit vote, traders in U.S. markets ended on the best 5-day period since 2011 and new highs last week. Investors and traders have come to the realization that economically-friendly policy under a new Trump Administration outweighed the uncertainty after their preferred candidate Hillary Clinton was defeated.

“For the moment, investors appear to see the prospects of tax reform and fiscal stimulus as the most important result of Mr. Trump’s victory,” economists from Goldman Sachs said in a note late last week, adding “initial reactions could evolve as the new administration’s policy proposals and appointments take shape.”

“If we hear from Trump that he is not going to undo Dodd Frank… or if GOP legislators start pushing back on deregulation, we could see financials fall from lofty perches, ” Mr. Block said. He also cautioned the markets could turn “if Trump makes noise about leaving ACA alone because he can’t figure out how to replace it yet, health care could suffer a setback.”

Still, over the last four weeks, the financial sector has shot up more than 12% on the heels of an anticipated interest-rate hike from the Federal Reserve. The Federal Open Markets Committee meets again in December. Fed futures, a gauge used to forecast upcoming changes in monetary policy, indicate expectations for rate increase are at 100%.

That helped push the benchmark 10-year U.S. Treasury bond down 0.027 percentage point to 2.31%. The benchmark moves inversely to its price.