Why David Perdue Is Still Favored In Georgia Senate Race 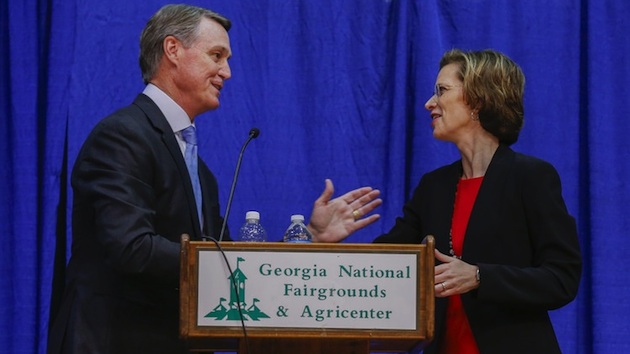 Election projection models at the Crystal Ball and FiveThirtyEight have both adjusted their Peach State ratings to reflect either a race headed for a runoff, and even one in which Michelle Nunn is slightly favored to win. PPD’s model believes they are overestimating Michelle Nunn’s chances against David Perdue in the tightening Georgia Senate race.

If that happens, which even PPD’s tracking poll suggests has become more likely, the race — and, perhaps even control of the U.S. Senate — wouldn’t be decided until 2014. The runoff is scheduled on Jan. 6, 2015, just over two months after Election Day. Let’s take a look at the analysis, polling and state data. Of course, you can always get an idea of the overall political landscape by checking out the 2014 Senate Map and generic ballot tabs on the end.

There is no doubt that polling had been moving in Nunn’s direction over the past few weeks amid Perdue’s own comments regarding outsourcing, and the Democrats’ effective response. But one of the reasons why we believe other election projection models jumped the gun is actually the polling, itself.

PPD’s tracking poll currently shows Perdue leading Nunn 48 – 45 percent, which is a reversal from last week when Nunn led 46 – 45 percent. The latest CNN/ORC live-caller survey found Nunn slightly ahead, but its sample size is half as large as the Atlanta Journal-Constitution Poll, which found Perdue leading once again by a similar margin as PPD’s tracking — 44 – 42 percent. AJC survey even displays a slight average Democratic bias on PPD’s Pollster Scorecard. Yet, they are obviously seeing what we are seeing, which is that Nunn’s run appears to be done.

Nunn has never hit 50 percent and, with the exception of one single poll all cycle, has been unable to touch 48 percent, while her average has yet to crack 46 percent. Meanwhile, Perdue has hit the 50-percent threshold multiple times throughout the cycle, though not as of late. But even the fundamentals still favor the Republican.

Primary polling dramatically underestimated Perdue’s actual performance both in the initial primary round and the runoff. Kingston was ahead of Perdue going into the runoff, yet ultimately lost. While everyone else was writing Perdue’s political obituary — because, look it up, the polls and pundits favored Kingston — we warned that pollsters were underestimating Perdue’s support in the Metro Atlanta suburbs and rural counties.

They did. Going into Election Day with a 6-point deficit on the RCP politics average, Perdue topped Kingston 50.9 – 49.1 percent. Did these same pollsters readjust their models? Nope. Let’s take a look at the aforementioned polling just to drive home the point.

(Please note: Above is the RCP spread and final average juxtaposed to PPD’s final tracking poll. The final day of the survey was conducted one day before the runoff.)

Because the other variables outweighed PPD’s tracking — though we pushed back on it — even PPD’s model showed a slight Kingston advantage. Since then, we have adjusted our model in Georgia because, we believe there are two factors that account for the variance in the spread, and the adjustment was obviously warranted.

First, PPD tracking, as do internal pollsters, survey voter files. This gives us a far more accurate picture of who is going to actually vote, as well as how they will vote. Only one other public poll — the joint, bi-partisan FOX Poll — uses voter files in their polling model.

Second, Perdue had Establishment Republican support during the primary, and that came with a ground game we all clearly underestimated.

We’ve heard much about Nunn’s ground game, which has been used as justification for pollsters’ findings and pundits’ ratings. But while Republicans have 17 major outreach offices across Georgia, Democrats have just seven. Facilities like the Cobb County GOP headquarters are under long-term leases, while Democrats just appeared on the scene and are mostly renting short-term.

This is the real ground game environment throughout the state.

Looking at the early voting data, Perdue is performing as the fundamentals and related data would suggest. Perdue leads Nunn among those who already voted by 10 points — 52 – 42 percent.

Let’s assume for a moment that neither candidate tops 50 percent on Election Day. What does the data actually tell us about Nunn’s chances?

Since 1992, the GOP has increased its margin from Election Day totals to runoff totals by roughly nine points. In 2008, which was a wave election year for Democrats, Republican incumbent Sen. Saxby Chambliss was forced into a runoff after failing to hit 50 percent on Election Day. He was ahead by four points, but went on to win the runoff by 14 points.

There are a host of factors we could use to scrutinize the results of runoffs in other cycles, but in this cycle control of the U.S. Senate is at stake. Given the likelihood Republicans will remain more energized than Democrats, perhaps even more so than they are now, we must assume Nunn’s path to victory will be very narrow. Sure, two months is a lifetime in politics and a ton of money will flood the state in that period. However, we cannot reasonably throw aside state voting history and political leanings, as well as the “big picture” fundamentals this cycle, for a slew of hail mary possibilities.

Perdue remains the favorite in the Georgia Senate race despite the hype, with the GOP enjoying a 69 percent chance they will pick a seat that clearly still Leans Republican.

(Please note: Our model uses separately calculated averages from weighted polls based on PPD’s Pollster Scorecard. Above is the raw spread and PPD Spread. The latter is weighted, but also includes PPD’s tracking.)[/tab]