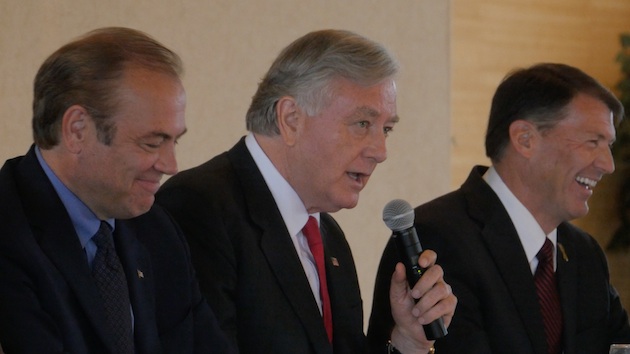 Aside from two widely unrealistic polls conducted in early October, all data suggest the South Dakota Senate race was never really competitive, despite claims to the contrary. PPD’s 2014 Senate Map Predictions model has never budged from its Safe Republican rating in this contest and, in fact, early in the cycle, PPD identified the Mount Rushmore State as one of three prime GOP pickup states.

Now, recent developments, two in particular, have prompted us to address the race once again, with an aim to explain our logic and put these ridiculous ideas to bed once and for all ahead of Election Day. One notable pundit moved this race to Leans Republican just last week based on flawed surveys, a decision that was an enormous mistake.

Let’s take a look at the commentary, analysis, polling and state data. Of course, you can always get an idea of the overall political landscape by checking out the 2014 Senate Map and generic ballot tabs on the end.

South Dakota, West Virginia, and Montana, have all stayed at or above Likely Republican, while others ridiculously entertained the idea that Democrats had a shot in one or any of these states. That was always a dream, and we affirmed our assessment after former two-term Republican Gov. Mike Rounds easily secured the Republican nomination.

I cannot stress enough that the model used at PPD is a “big picture” model that weighs more heavily for the fundamentals. In other words, our model does not wildly gyrate between ratings based upon knee-jerk reactions to polling results that are either honest outliers, or worse, intentional attempts to obfuscate the state of the race.

Republicans, unfortunately for them, fell for the hype earlier this month, but now seem to be coming back to reality after new polls affirmed Rounds has a comfortable lead in the race. The National Republican Senatorial Committee now plans to cancel approximately $346,000 in ad spending on his behalf, according to an official who spoke with POLITICO.

Democrats are still on the air, however, they have their own problems at the moment.

On Monday, Democrat nominee Rick Weiland lashed out at Washington Democrats over the DSCC’s ads. He argued, probably correctly so, that they have helped former Republican-turned-independent Larry Pressler — “not the candidate of the party you are supposed to be campaigning for.”

“They make me, as the Democratic candidate, look like a dirty campaigner,” he said.

He has a point. And in the analysis, we’ll examine it.

Pressler has gained roughly 5 points since Democrats began their ad campaign, while Weiland remains stuck at an average 30 percent. South Dakota is an inexpensive media market, and the money the NRSC is currently diverting is all that remains from the $1.5 million to $2 million set aside after they were faked-out by outlier polls. But the state’s built-in Republican advantage, which was deeply exacerbated this year, likely would have been all Rounds needed to cross the finish line.

Rounds has seen his support hit the mid 40s multiple times this cycle, including now. Out of all voters in the state, Republicans represent a outright majority. Considering Democrats do not account for a third of the state’s voters, the presence of Larry Pressler in the race makes Weiland’s ability to put together a winning coalition all but impossible.

For either the independent or the Democrat to pull off an upset, the Republicans would have had to nominate a deeply flawed candidate, such as the case in 2012. That is not the case in 2014, regardless of what many in the media have asserted. For all of Rounds’ minor problems, he is a relatively well-liked former governor of a state with a PVI (Partisan Voting Index) that is strongly Republican — R+10.

Not surprisingly, there has been little to no evidence to suggest anything but a Republican victory in the South Dakota Senate race. Out of the 14 polls conducted this cycle, just two — one of which was a partisan poll with a likely agenda — have shown Rounds leading by only single-digits. Twelve have shown a consistent double-digit spread, and PPD tracking over the course of two weeks shows Rounds up by just over 14 points.

The bottom line is that Republicans made the correct call deciding to focus their resources on races that are tighter. Both Scott Brown in New Hampshire and Thom Tillis in North Carolina are on the precipice of eking out a surprising victory. The GOP should use the money there or elsewhere, because this race is Safe Republican.

(Please note: Our model uses separately calculated averages from weighted polls based on PPD’s Pollster Scorecard. Above is the raw spread and PPD Spread. The latter is weighted, but also includes PPD’s tracking.)[/tab]

Why David Perdue Is Still Favored In Georgia Senate Race