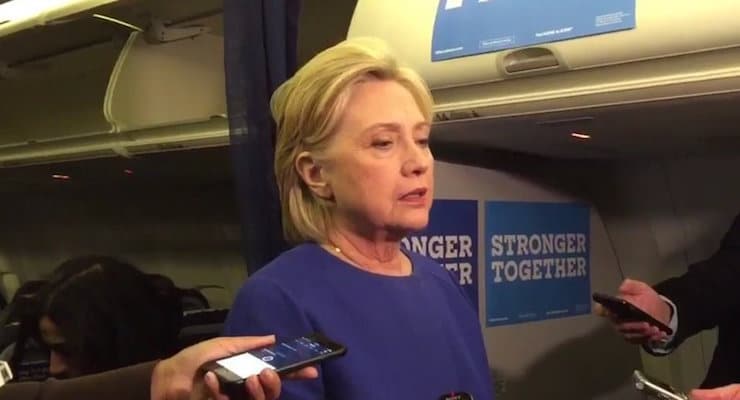 Hillary Clinton gave a press conference on her campaign airplane in response to the terror attacks in Minnesota, New Jersey and New York. She appeared to be heavily sedated, which kicked off the hashtag #ZombieHillary

Democratic candidate Hillary Clinton has again cancelled an event in California as a result of her health and the campaign is claiming she is being treated for pneumonia. The cancelation marks the third day–following Monday and Tuesday of last week–that the candidate’s health has pulled her from the campaign trail.

Questions surrounding her health ramped up after she collapsed at the 15th memorial service for the September 11, 2001 terror attacks.

On Sunday, Mrs. Clinton held a brief presser and spoke to reporters on her campaign airplane to respond to her rival Donald Trump regarding his comments after the terror attacks in Minnesota, New Jersey and New York. Critics claim she appeared to be heavily sedated, or at least extremely fatigue, which kicked off the hashtag #ZombieHillary on Twitter [previously read spoke].

The development comes after a new [content_tooltip id=”39935″ title=”YouGov”] conducted for the Huffington Post finds just 39% of Americans currently believe that Clinton is in good enough physical condition to effectively serve as president for the next four years. According to the poll, an almost equal 38% say she isn’t in good enough condition and 23% say they are unsure.

The results represent a significant shift in the numbers from just over a week ago, when the same survey found that 52% of Americans believed Clinton was in good enough shape, 33% didn’t think she was and 16% didn’t know.

The campaign did not say for certain if she would be able to return to the campaign trail on Tuesday.

Hillary Clinton: "Why Aren't I 50 Points Ahead?"