Could Obama Have Beaten Trump? Probably Not. 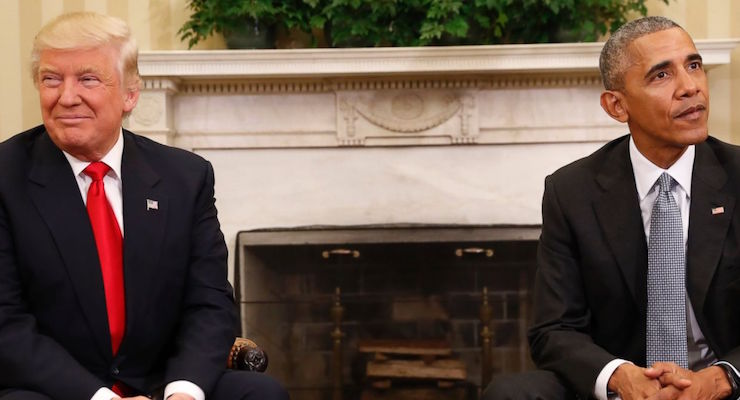 In a recent interview with his former advisor David Axelrod, President Barack Obama claimed he “could’ve mobilized a majority” to defeat President-elect Donald J. Trump. While the president can believe whatever he wants if it makes him feel better, it’s impossible to know who would’ve won this hypothetical election to a certainty.

But I’ll bite, largely because I don’t believe the fundamentals, the data or the results support his claim. Let’s look at everything he said on the subject while making the statement.

And — and win back seats in the Senate. And — and so, I understand what happened politically.

Two points I would make though, David, because obviously in the wake of the election and Trump winning, a lot of people have — have suggested that somehow, it really was a fantasy. What I would argue is, is that the culture actually did shift, that the majority does buy into the notion of a one America that is tolerant and diverse and open and — and full of energy and dynamism.

And — and the problem is, it doesn’t always manifest itself in politics, right? You know, I am confident in this vision because I’m confident that if I — if I had run again and articulated it, I think I could’ve mobilized a majority of the American people to rally behind it.

I know that in conversations that I’ve had with people around the country, even some people who disagreed with me, they would say the vision, the direction that you point towards is the right one.

What the president was really saying was that American voters didn’t repudiate him, his policy or the state of the economy under his tenure. He insinuated Hillary Clinton, who ran as his endorsed successor and legacy defender, was the real problem. To back that up, he cites conversations with unnamed “people around the country” who say “the vision, the direction” he has for the nation “is the right one.”

Let’s begin with there and get more specific.

Point of fact, more voters in 2016 than in 2012 said the country was going in the wrong direction, not the right one. Still, it translated into roughly the same number of voters breaking against the direction Mr. Obama advocates in favor of.

On Election Day 2012, polls showed the right track/wrong track spread was only -14 points, with 54% of Americans saying the country was headed in the wrong direction and 40% saying it was headed in the right direction. The voting electorate was even more favorable to Mr. Obama, with the spread only -8 points, 52% to 46%. A whopping 84% of the 52% broke for the Republican (43.7).

On Election Day 2016, polls showed the spread had ballooned to -30 points, with 61% having a negative impression and 31% holding a positive impression. The actual voting electorate this time was much less favorable to Mr. Obama, with the spread still -29 points, 62% to 33%. A whopping 69% of the 62% broke for the Republican (42.8).

Not surprisingly, voters in these two elections were making a choice based on completely different considerations. In 2016, the most important candidate quality was overwhelmingly was “Can bring needed change” (39%) while “Cares about people like me” (15%) was the least. On the former, Mr. Trump crushed Mrs. Clinton 83% to 13% of the most important candidate quality.

In other words, it was a change election and it worked in favor of the change candidate–Mr. Trump. But even I take issue with some of the alleged results of the exit polls. So, let’s just take a look at some of the issues that drive these numbers and the impact on the result.

More than 200 battleground counties, many of which were not even considered particularly swingy before Election Day, flipped from President Obama in 2008 and 2012 to President-elect Trump in 2016. Outside of the typical battleground states–such as Florida, North Carolina and New Hampshire–those counties were disproportionately located in the Midwest and Appalachia regions.

Trade played an enormous role in the Rust Belt and, unless he changed his position, Mr. Obama would’ve been on the wrong side of the issue as it pertains to the Trans-Pacific Partnership (TPP). Forty-two (42%) of voters nationwide said trade “Takes away jobs” and they broke big for President-elect Trump, 65% to 31%. Of the 38% who said it “Creates more jobs,” he only lost this group 59% to 35%.

Many pundits, most of whom are now largely discredited, have been blaming low turnout for The Great Lakes State going Red for the first time since 1988. But dig a bit deeper and that explanation doesn’t really suffice.

Mr. Trump carried 12 counties in Michigan that voted to reelect Mr. Obama in 2012, including Monroe, Bay, Eaton, Saginaw and Macomb. In Macomb County, voter turnout actually increased 4% juxtaposed to the 1.1% increase statewide from 4 years ago. It’s true Mrs. Clinton got roughly 75,000 fewer votes than Mr. Obama in Wayne County, but we are comparing her to his pre-TPP performance, which by no stretch of the imagination could we presume to be the same.

Like Michigan, Pennsylvania had not gone for a Republican on the presidential level since 1988. Unlike Michigan, no one can blame low voter turnout in Democratic strongholds for Mr. Trump’s victory in The Keystone State, pure and simple. At the heart of the reason the state flipped is that counties classified as belonging to the Appalachia region represent 52 of the 67 counties statewide, which cast 44% of the Keystone vote.

After decades of Democratic decline in Appalachia, they went big for Mr. Trump by just under a half million votes, up significantly from the roughly 176,000-vote lead Gov. Romney enjoyed over Mr. Obama.

In Iowa, Mr. Obama’s margin of victory in 2012 had already shrunk from 10 points in 2008 to 6 points. In 2016, Mr. Trump demolished Mrs. Clinton by 10 points, a 16-point swing. With the exception of Linn, Johnson and Scott, the president-elect flipped almost all of the eastern counties in the state. Counting Scott County, which went for Mr. Obama by roughly 14 points and Mrs. Clinton by only 1.5 points, a whopping 18 eastern counties flipped from backing Mr. Obama in 2012 to backing the next president.

Florida would be a must-win for both candidates at this point in our hypothetical election. But despite Mrs. Clinton squeezing more votes out of Broward County than Mr. Obama did, she still lost America’s biggest battleground state.

And President Obama would’ve likely lost it, too.

President-elect Trump won Pasco County by nearly 52,000 votes, increasing the margin from Gov. Romney’s 14,000 edge four years prior. Hernando County gave him a 27,000 lead over his rival, up from 7,100 for Gov. Romney. In Polk County, Mr. Trump won by about 40,000 votes, roughly twice the margin Gov. Romney enjoyed.

What was the most important issue to these Obama-Trump voters? The answer: “Bring needed change.”

I could go on and on with these examples in each battleground state because they are plentiful. But I think there is one question we need to place above all other considerations.

Would Mr. Obama, an 8-year incumbent, have been able to soften the electorate’s view of the status quo? In a change election, being the incumbent isn’t exactly a benefit.

In 2012, Mr. Obama and his advisors were very concerned Mr. Trump might just decide to run for the GOP nomination against Gov. Romney and, ultimately, against him for the presidency. I think Mr. Obama had good reason to fear that scenario, even if we can’t know for sure how it would’ve turned out.