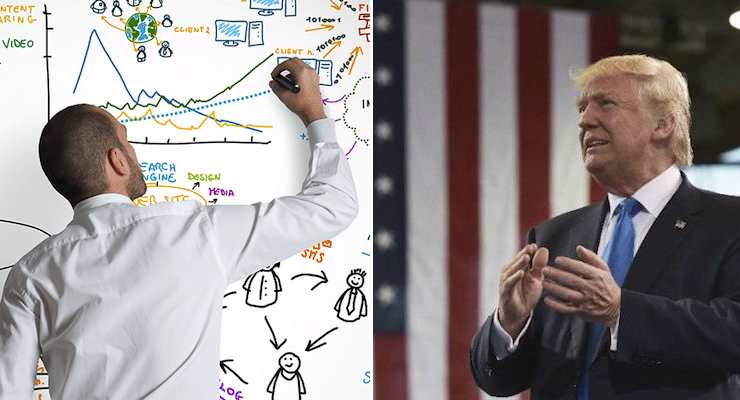 There will no doubt be numerous columns written this week about the failure of the mainstream media and political pundits to understand and predict the rise of President-elect Donald J. Trump. There will be those who will take their bows and others who will make their excuses, justifiably and not on both accounts.

Perhaps this will serve as our small contribution to that effort. But while the American people have long-perceived the media as out-of-touch, corrupt and leftwing advocates, 2016 was the year everyone found out why People’s Pundit Daily was founded.

At People’s Pundit Daily, we were and remain very concerned about the monopoly the political left has silently enjoyed in the polling industry and election forecast business. Whether they pretend to be objective or openly partisan, PPD is the only outfit of its kind not dominated by liberal Democrats or the media establishment in some capacity. We are the first pollster-election projection combo, ever.

That means we don’t only analyze Big Data, but we also collect it.

And 2016 was the year Big Data beat Big Media on performance, analysis and predictions in the U.S. presidential election, U.S. Senate elections and down-ballot contests. It is also the year Big Media pollsters finally lost the public trust and, whether they know it or not, 2016 marked the beginning of the end for them.

Big Data operations like People’s Pundit Daily, through normal and natural market forces, will replace the dinosaurs of the past.

From the primaries to the general election, we offered our regular readers, passing news consumers and political junkies a completely different assessment of the 2016 election season. In the end, despite overwhelming criticism, it proved to be the accurate assessment of the election and reality.

Let’s take a look at the record and remind everyone just how much of an outlier we were at PPD.

PPD split early and hard from the conventional wisdom echoed in Big Media. On Feb. 10, just one day after the New Hampshire primary, I wrote the following:

At PPD, we deal in facts and data, and our post-New Hampshire primary analysis is nothing short of a reality check for candidates, pundits and the media. That being said, right off the bat, we implore you to ignore those media pundits and take heed to what we will stress here.

The previous day, I laid the foundation for our primary analysis by taking on The Fix, run by Chris Cillizza at The Washington Post, which ran the headline “Don’t sleep on Ted Cruz. The next five weeks look very, very good for him.”

Aaron Blake, the author of this particular piece, argued that “moving forward it’s easy to see how the Granite State could one day look like a very minor bump along Cruz’s path to the Republican presidential nomination.” The argument basically held that New Hampshire was far more secular and “the next few weeks of the GOP race look a whole lot more like Iowa than New Hampshire. And that is fantastic for Cruz.”

Readers can go back and read the correct analysis in more detail, but suffice it to say that argument was simply historically inaccurate. Further, I stressed on more occasions than I could count that Mr. Trump’s appeal was always attitudinal, not ideology and PPD was the only model to predict he would sweep all The Palmetto State’s delegates.

And he did, dominating self-described conservatives, very conservatives and white evangelicals, all blocs Cruz was hoping and expecting to consolidate. While Nate Silver, the glorified poll-reader who is marketed by Big Media as a Big Data guru, was giving Mr. Trump a 5% chance of winning the GOP nomination, PPD gave readers the facts and Mr. Trump a significant edge.

We believe Cruz will be extremely competitive, but a combination of Trump’s strengths among Cruz’s core target voters, momentum and the dynamics of the field, makes it crystal clear the frontrunner is well-positioned to take the top spot in South Carolina on Feb. 20.

The rest is history.

We were bombarded by readers–some of whom followed our 2014 debut when we emerged as the most accurate election forecast model–asking what was in the secret sauce. There isn’t one answer to that question, but the in-house Big Data polling operation and analysis is a major contributor. As I pointed out back in May in the article “Nate Silver is Wrong About Trump, Again. He’s Wrong a Lot. Here’s Why,” I tried to warn him and his cult-like followers that he was about to be blindsided.

U.S. political history is riddled with endless examples of political shifts. Successful election forecasters should not only know that the map on the presidential level isn’t static but also learn how to recognize when the map is shifting. Hypotheses centering on Blue Walls–and, even Red Walls once upon a time–are destined to fail, eventually.

Our in-house polling operation at PPD is how we identified that political shift. Unlike Nate Silver, we talk to actual Americans in Main Street America and don’t exclusively rely on third-party pollsters.

When he gave President-elect Trump a 25% chance of defeating Hillary Clinton, we saw all the hallmarks of a major political realignment, one that had been trending for years and ultimately gave him a not-so hidden advantage. Whether it came to a head in 2016 or just to everyone else’s attention is yet to be determined. We suspect it is the former, but that’s another article and another analysis.

So, we began to release the results of our Big Data polling operation, which was unsurprisingly met with heavy criticism and pushback.

The U.S. Election Atlas erroneously claimed they reviewed methodologies, data and decided we weren’t worth the weight of random sample polls conducted by Big Media. For the record, we were never contacted by anyone over there and would happily have enlightened them on the reasons we published very different and, consequently, more accurate results.

The final results: Mr. Trump got 48.8% of the vote to 47.6% for Mrs. Clinton. It doesn’t get much closer than that and there wasn’t a single Big Media poll that found Mrs. Clinton trailing in the state, which no Republican presidential candidate had been able to carry for roughly 3 decades.

In Florida, home to PPD and where we pegged Gov. Rick Scott’s 2014 reelection within 5,000 votes, the final PPD Sunshine State Battleground Poll found Mr. Trump leading by 1.8%. He not only won by 1.4% but our demographics were spot on. A few days before the election, while all the favorite Big Media leftwing pundits were misreading early vote data, we told you Mrs. Clinton didn’t stand a chance. Due to post-election attempts at revisionist history, we recently reiterated why Big Data always disagreed.

In Michigan and Wisconsin, the final PPD Battleground State Polls found the two candidates tied but leaning to the Republican nominee by less than 0.5%.

We are frequently asked why RealClearPolitics.com or HuffPollster won’t aggregate our polls. After providing all the requested information to the latter, we were told they would. In the end, they never did and, at this point, we are starting to agree with that decision albeit for different reasons.

The PPD Poll is more than just a poll, as our subscribers have learned. Following the 2012 national polling debacle, I began to open my mind to the possibility the polling industry needed to evolve. Post-election research, which I elaborated on back on Oct. 2 in “Defense of the LA Times Poll,” began to validate some of my suspicions. A study from Columbia corroborated our own research, which concluded wild swings pollsters found in 2012 weren’t real, but rather “artifacts” of the polls themselves and their sample errors.

Low response rates, sample response bias, flawed methodologies and corruption, all contributed to one polling embarrassment after another at home and aboard. In 2014, we adopted a more sophisticated Big Data operation, recognized the potential of the Rand Corporation model, incorporated what we decided we should and it paid off.

The PPD Election Projection Model ended up clobbering the competition–i.e. Nate Silver at FiveThirtyEight, Nate Cohen at Upshot, The Fix and just about everywhere else.

Big Media pollsters were almost universally stunned by the Republican wave. The one and only adjustment we made to the model post-2014 was to diminish the importance of Big Media polls, a call we made after their weighted influence caused us to miss the mark on the U.S. Senate race in North Carolina. They reduced the influence of our own results, which turned out to be more accurate.

In 2016, we didn’t make the same mistake and a small Big Data operation in Florida crushed Big Media and their dino-pollsters on Election Day. The PPD Election Projection Model was again the most accurate election forecaster in 2016 and, overall, put out the most accurate polling before Election Day. We’re claiming that mantel until someone else performs well enough to take it back from us.

That will no doubt eventually happen. But if the last few weeks are any indicator, it’s safe to say they have no intention of evolving or making an attempt to earn back the public trust. That means business in 2017 and beyond should be very good to People’s Pundit Daily.

Could Obama Have Beaten Trump? Probably Not.