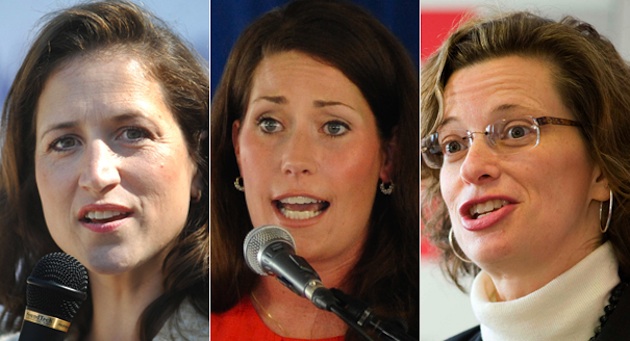 With the help of a friendly media, Democrats have talked up the candidacies of Natalie Tennant in West Virginia, Alison Lundergan Grimes in Kentucky and Michelle Nunn in Georgia. But all three have begun to show the downside potential of strong party establishment politics, which favors discouragement of insurgent candidates and contentious primary debate.

Beginning with Alison Lundergan Grimes, whom polls show has been more competitive than the state’s political leanings would suggest, is about to find her lackluster campaign on defense. Up until now McConnell and his supporters have largely left the inexperienced Grimes alone. But that’s all about to change.

Not one but two independent expenditure groups that support Senator McConnell have bought a total of $5.2 million in ad time to bombard Grimes immediately after Tuesday’s primary election. KSL, a Super PAC that has begun the effort to link Grimes to a deeply unpopular President Obama, will again be tasked to start off the assault with a $575,000 ad buy scheduled to run this Wednesday through June 2.

And how effective can we expect Grimes to be at defending against the assault?

The We Are Kentucky PAC, the main PAC supporting Grimes, recently reported raising just $32,500 in the first quarter of 2014. Since its inception last July, it has raised only $293,000. We Are Kentucky has yet to even run or reserve media advertising on behalf of Grimes. However, it has already burned through most of the money it has raised. As of April 1, the PAC reports having just $108,336 cash on hand. Meanwhile, just one super PAC supporting McConnell — Kentuckians for Strong Leadership — has reported raising more than $3.3 million already.

Michelle Nunn, the daughter of former longtime Democratic Sen. Sam Nunn, has already shown signs of not being ready for primetime. During an interview on liberal MSNBC, Nunn was wholly unprepared to answer a question about the predominant issue of the election cycle — ObamaCare. Even a favorable editing job couldn’t mask the disastrous moment, which has now been made into a video by the opposition.

“So, at the time that the Affordable Health Care Act [sic] was passed, I was working for Points of Light,” Nunn says, right before the editor pulls a bit of magic by deleting the awkward rambling. “I wish that we had had more people who had tried to architect a bipartisan legislation,” she says before yet another edit job. “I think it’s impossible to look back retrospectively and say, ‘You know, what would you have done when you were there?’”

How she could be so unprepared for that question, is a question that only her should-be-replaced campaign head can answer (UPDATE: Grimes twice Wednesday [May, 21] also refused to answer whether she would have voted for ObamaCare).

Meanwhile, Natalie Tennat has run an under-the-radar campaign and is trailing Shelley Moore Capito by large margins in every poll conducted this cycle. Out of the four polls conducted since August of last year, Capito has averaged 48 percent, while Tennat has averaged just 37.5, only reaching a 40 percent ceiling of support once.

The media coverage and election projections have been widely overblown in favor of these Democratic candidates. The Republican candidates are all favored to win on PPD’s 2014 Senate Map Predictions, though you would never have guess it listening or reading the past media coverage. Despite tight polling, Grimes is likely at her ceiling of support in Kentucky, while McConnell’s unpopularity is largely due to his right flank being unsatisfied with his record. However, come November, those voters will come home.

The Kentucky Senate race is rated “Likely Republican” on our 2014 Senate Map Predictions.

The Georgia Senate race is being sold in a similar fashion as the Kentucky contest, a potential opportunity for Democrats to play offense in an otherwise favorable Republican environment. However, as we have previously examined in detail, this is unlikely.

In West Virginia, the handwriting is on the wall. The Mountain State hasn’t been represented by a Republican in the U.S. Senate since 1959, which is the longest Republican Senate shutout in the country. But all things must come to an end, and the shutout will.

American Legion Doesn't Back Up Jay Carney On VA Resignation