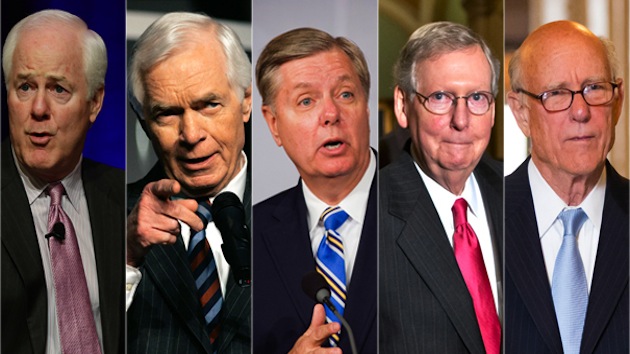 With the exception of Mississippi Sen. Thad Cochran, a race we initially rated a “Toss-Up” going into the first primary, PPD’s 2014 Senate Map Predictions model favored each and every one of them. Sen. Cochran still has woes in the form of conservative challenger Chris McDaniel, who narrowly defeated Cochran before losing the runoff election thanks to dubious, and likely fraudulent votes from liberal black voters.

So, how did this happen, particularly at a time when American voters consistently tell pollsters they want new blood in Washington?

Every second year political science student knows that incumbency wins. While Americans say they want to “throw the bums” out, the “bums” more often than not do not include their own representative or senator. Still, in 2014 there seemed to be a stronger-than-usual anti-incumbent sentiment, particularly among Republican and Republican-leaning independent voters. In fact, the historically low favorability numbers for the party are due in large part from the number of conservative voters who say they have an unfavorable opinion of the GOP.

From the beginning, the Republican Establishment knew their guys would have trouble on their right flanks, and they fought back.

“I think we are going to crush them everywhere,” the Minority Leader Mitch McConnell told The New York Times at the onset of the cycle. “I don’t think they are going to have a single nominee anywhere in the country.”

McConnell was both right and wrong.

While “they” don’t have a nominee this cycle, nowhere did a Republican incumbent senator “crush” their challenger, let alone “everywhere.” With the exception of McConnell’s own race, where challenger Matt Bevin imploded and was damaged by a cock-fighting story, Republican incumbents were very beatable.

Kansas Sen. Pat Roberts won by a less than impressive seven-point margin on Tuesday against physician Milton Wolfe. In Texas, Sen. John Cornyn couldn’t even break 60 percent in a deeply conservative state that once viewed him as the most conservative senator in the country. Neither could South Carolina Sen. Lindsey Graham, a powerful leader in the aggressive foreign policy wing of the party. And, last but not least, we have demonstrated it is a fact that Republican voters alone preferred McDaniel over Thad Cochran.

As unimpressive as all of this may seem, they will be heading back to Washington, while the conservative challengers are, well, losers.

Nearly 40 percent of the state voted against Sen. John Cornyn, who faced seven other primary challengers. Graham had six challengers, who together garnered nearly 44 percent of the vote. Senator Roberts, who had the second worst showing, had more than half — 52 percent — vote against him, but the vote split between Wolfe and two other challengers. By raw vote totals, Roberts actually performed worse than Cochran, but considering Cochran’s tactics, it is fair to say he performed the worst.

It shouldn’t at all surprise observers that in the one race that the anti-incumbent forces coalesced around a single, viable candidate, they came the closest to defeated a sitting senator. “Tea Party” groups, for lack of a better term, have two challenges they have yet to address and, until they do, they will continue to lose primaries.

First, which is the point I am making above, is their inability to coalesce behind a single candidate. It is inherently fatal to the art of political messaging to have so many alternatives to the target you are attempting to draw a contrast with. It muddles the message that must be honed and delivered to voters with precision coherence.

Second, it is time for the Tea Party to somewhat disband and rebrand. I am going to make the argument no one has the courage to make, which is as follows:

The Tea Party, fair or unfair — and, just for the record I personally think it is unfair — has lost its usefulness because national Tea Party groups have lost their credibility with the American public. If you think the Republican Party is suffering from low favorability numbers, just look at the voters’ views of the Tea Party. There are more Republican and Republican-leaning voters who have an unfavorable view of the Tea Party, than there are conservative and Tea Party supporters who have an unfavorable view of the Republican Party.

Now, it’s unquestionably true that the media has demonized the Tea Party, characterizing them in a grossly unfair light that paints their views as extreme. It is also true that — when pollsters focus only on the issues — more voters will identify with the positions held by the Tea Party than with the truly extreme position held by members of the Democratic Party. But none of that matters, because the Tea Party “movement” has evolved into national Tea Party organizations and, as a consequence, the face of the movement has evolved from town hall-meeting activists to national organizations that now have their own establishment.

Still think I am wrong.

The only noteworthy incumbent to go down in defeat this cycle came from the House, not from the Senate where national Tea Party groups chose to spend the bulk of their money this cycle. Eric Cantor’s stunning defeat at the hands of Dave Brat offered the consulting class many lessons, but activists missed the most significant lesson of all.

Even though Brat himself acknowledged his strong grassroots support, there wasn’t a single nationwide Tea Party group backing Dave Brat. Laura Ingraham, a conservative talk radio host who backed Brat early on in the contest, openly criticized Jenny Beth Martin, the co-founder and national coordinator for the Tea Party Patriots, for not even bothering to return Brat’s phone calls during the campaign. Judson Phillips, of Tea Party Nation, wrote an op-ed in the Washington Times back in March, in which she argued for widespread Tea Party support in the race.

Fortunately for Brat and the citizens living in the 7th Congressional District, it never came, which prevented the Republican Establishment and Debbie Wasserman-Shultz from being able to paint Brat as the typical “extremist Tea Party” candidate.

The data and the election results are clear. If the Tea Party, which is still a powerful force in Republican politics, wants to offer the party a positive contribution, then they will take both of my points of argument as mana from Heaven. They need to step back, rebrand, and take more of a back seat to the local Tea Party groups. They must support the people the local groups have chosen to represent their communities, or even broker the selection process, rather than fracturing the anti-incumbent vote with their own hand-picked candidates.

Or, they could be stubborn and stay the course, and they will continue to lose both at the primary ballot box and in the battle for public opinion.