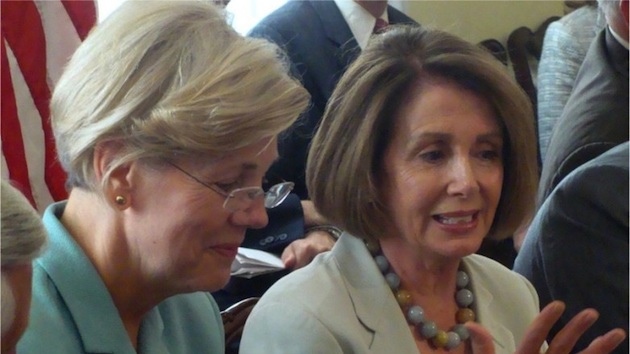 House Democrats threatened a government shutdown Thursday after leftist Sen. Elizabeth Warren (D-MA) urged Minority Leader Nancy Pelosi (D-CA) to oppose the $1.1 trillion spending bill. While Warren, who is now a member of the party leadership and widely thought to be the leftist alternative to Hillary Clinton in 2016, claims the effort is to preserve the financial regulatory policy known as Dodd-Frank, they are playing right into conservatives’ hands.

The spending bill barely passed on a 214 – 212 test vote, with all of the Democrats voting against it, while 16 conservative Republicans joined the opposition. In the end, Republican Reps. Kerry Bentivolio of Michigan and Marlin Stutzman of Indiana cast the final votes to clear the procedural obstacle.

President Obama and Vice President Biden were calling House Democrats appealing for their support. White House Chief of Staff Denis McDonough also arrived on the Hill late Thursday to meet with the Democratic caucus. But at this point, it appears the conservative members, who felt slighted by Republican leadership for not fighting on immigration now or passing a short-term funding bill until Republicans increase their majorities, are closer-than-ever to getting what they wanted in the first place.

“We expect the bill to pass with bipartisan support today, but if it does not, we will pass a short-term C.R. to avoid a government shutdown,” said Michael Steel, a spokesman for Speaker John A. Boehner. “The length and other details of that bill have not been determined.”

Pelosi said she was “enormously disappointed” in President Obama for deciding to support the bill. In fact, the minority leader said that she was “heart-broken” when she heard the news.

Of course, despite Pelosi’s email claiming they have “leverage” to wage the fight, the futility of the Democrat effort lays in the fact that in 3 months the Democrats will have 9 fewer votes in the Senate and 13 fewer votes in the House, a sentiment White House Press Secretary Josh Ernest said the president shares.

“The fact of the matter is, if Democrats think they are going to renegotiate this in three months, they are going to have less leverage to do so,” Ernest said. “All the more reason for my Democratic colleagues to vote for the bill that’s on the floor now.”

Adding to the hypocrisy and flat-out self-implosion of the Democratic Party in the eleventh hour, is that 70 House Democrats voted for a bill that included the very change to the Dodd-Frank regulations that they are now protesting. While both sides of the opposition — the conservative flank and the left-wing flank — condemn Wall Street bailouts, they aren’t the entire reason the entire Democratic caucus voted no on the bill.

New York Rep. Nita Lowey, the senior Democrat on the House Appropriations Committee, supported everything in the bill except for the provision allowing for an increase in limits on contributions to political parties. However, while she claims the provision is the fruit of the still Senate Majority Leader Harry Reid, a Democrat from Nevada, and Speaker Boehner, it isn’t at all an accurate claim.

“The Reid-Boehner provision to increase by tenfold the limits on contributions to political parties is excessive and also does not belong on this bill,” Ms. Lowey said on the House floor. Except, Rep. Tom Cole (R-OK) said the campaign finance provision had already been agreed to with Senate Democrats.

“Democrats in the Senate consented to it and, I suspect, participated in it,” Rep. Cole said.

Nevertheless, with the midnight deadline weighing on their minds, Democrats decided to follow Elizabeth Warren and Nancy Pelosi off the cliff.