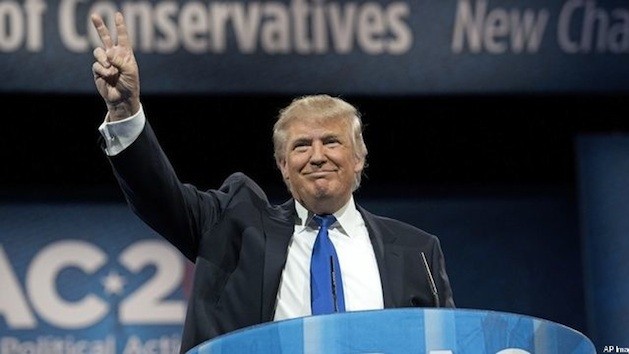 Trump, who has flirted with his own run for the GOP presidential nomination on several occasions, joins a long list of potential 2016 GOP contenders. CPAC 2015, which is hosted by the American Conservative Union (ACU), will be held from Feb. 25 through Feb. 28 at the Gaylord National Resort & Convention Center in National Harbor, Maryland, a long-used venue located just outside of Washington, D.C.

“We are honored that Donald Trump is coming,” ACU’s Chairman Matt Schlapp told Breitbart News. “I’ve had the opportunity to sit down with him and talk to him on a number of occasions. He is a true American success story. Whenever he speaks at CPAC, he is a crowd favorite because nothing is sacred and he tells it like it is.”

He made similiar comments, according to Breitbart, at a press conference aboard his private jet last month.

The last thing this country needs is another Bush. We’ve had it with the Bushes, and the last Bush did not do a great job. He gave us Obama, he gave us—as you know—Justice [John] Roberts [of the Supreme Court] who approved Obamacare. He’s got a second shot at it but who knows what’s going to happen, it’s not as good as the first one. But he [George W. Bush] gave us Justice Roberts who approved Obamacare. We’re all saddled with Obamacare, the country is saddled with it. And it really kicks in in 2016. It’s going to be a disaster for the country.

Trump will visit the Granite State to meet with statehouse Rep. Bill O’Brien, the former state house Speaker, and several conservative activists in March. Trump is also scheduled to visit Iowa again for the Iowa Agriculture Summit in Des Moines on March 7.