HomeNewsPoliticsTrump in Race, Whether Play-it-Safe GOP Establishment Likes it or Not

Trump in Race, Whether Play-it-Safe GOP Establishment Likes it or Not 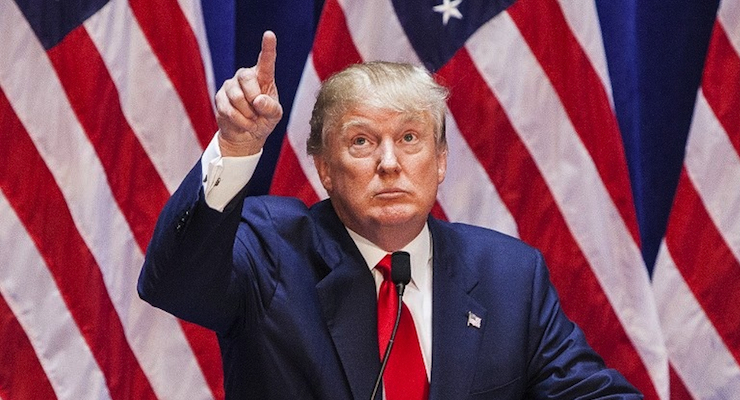 Donald Trump announces he is running for president at Trump Tower on Tuesday June 16, 2015. (Photo: Getty)

Billionaire real estate mogul Donald Trump announced Tuesday that he is running for president after years of flirting with the idea, as PPD promised.

“I am officially running for president of the United States,” he said from inside his signature Trump Tower in midtown Manhattan. “We are going to make our country great again.”

“The Donald” vowed to be the “greatest jobs president God has ever created” and gave a vintage Trump speech that unabashedly celebrated his wealth and slammed the notion that politicians, who have been taking America down the wrong road for decades, even know how to solve the nation’s woes.

The media, to include the Bush-cheerleader FOX News, moved to dismiss Trump’s candidacy as “not serious.” Self-proclaimed conservative commentators like George Will, who once characterized then-Ronald Reagan as a “kamikaze conservative,” and Charles Krauthammer, who shortly after was writing speeches for Reagan’s opponent Walter Mondale, outright mocked the speech.

(Update: In a Fox & Friends interview shortly after this article was first published Wednesday morning, Trump called both Will and Krauthammer “losers” in response to their mocking commentary.)

But the reason Trump resonates with blue collar Americans beyond the bubble is not only his straight-talk style, but what he is saying.

“How are these people going to lead us? How are we going to go back and make America great again?” Trump asked. “We can’t. They don’t have a clue.”

A focus group conducted by pollster and GOP strategist Frank Luntz during Trump’s speech Tuesday found that Mr. Trump made the best- and worst-tested statements of the campaign, thus far. Americans weren’t thrilled with his “best jobs president” comment, but voters across the spectrum gave him high marks when he promised to take on China, make Mexico pay for a fence to end illegal immigration and bring American jobs and money back to the United States.

There is little doubt that the American worker feels left out, or even betrayed, by deal-making politicians that seem to have the best interest of their friends and other nations at heart, rather than them. They will have to answer the questions and charges leveled by Mr. Trump whether the GOP establishment, who has lost two elections in a row with their play-it-safe strategy, likes it or not.

According to the PPD average of national Republican nomination polls, Trump is qualifying for at least the first two debates. Even before his announcement speech, his numbers began to rise in the first-in-the-nation primary state of New Hampshire. A Gravis Marketing poll out Tuesday found Trump surging to third place with 12 percent of the vote.

And that’s before voters even knew if he was serious about running.

“This is going to be an election, in my opinion, based on competence,” Trump said. “The American Dream is dead. And if elected president, I will make it bigger and stronger than ever.”

P. Donald Jiron, Another Proud Member of the Bureaucrat Hall of Fame