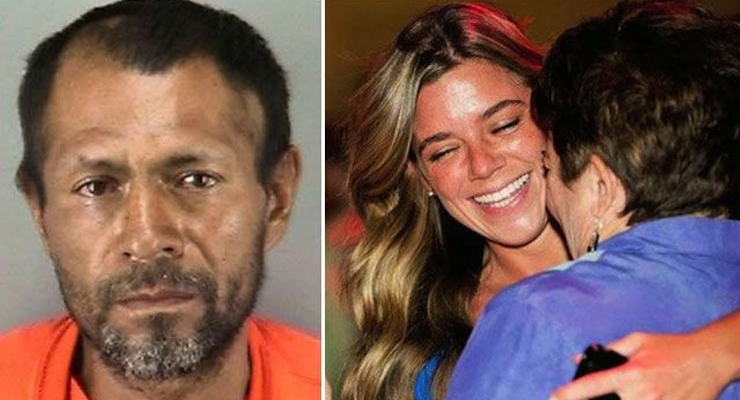 Kate Steinle, right, was a 32-year-old woman from San Francisco who was shot and killed by Francisco Sanchez, left, an illegal immigrant with 7 felony convictions.

Senate Democrats on Tuesday blocked a popular Republican-sponsored bill that would’ve cracked down on sanctuary city policies by threatening to withhold funds to local governments that don’t abide by federal immigration laws. The bill, known as the Stop Sanctuary Cities Act, failed on a 54-45 vote and Republicans failed to peel off a single Democratic vote.

“Sanctuary cities and the associated violent crimes by illegal immigrants are reaching a critical point, and we cannot wait any longer to take action to protect Americans here at home,” sponsor Sen. David Vitter, R-La., said in a statement. Vitter urged colleagues on the Senate floor to “remember Kate Steinle’s vicious murder and the tens of thousands of crimes committed by illegal immigrants within our borders.”

Steinle, 32, was murdered by an illegal alien who was taking “sanctuary” in San Francisco. Francisco Sanchez, the 45-year-old multiple felon and deportee who confessed to Kate’s murder, had been released from jail in March after San Francisco authorities didn’t honor an Immigration and Customs Enforcement (ICE) detainer request. Sanchez, unfortunately, is not the only recent offender and Ms. Steinle, unfortunately, is not the only recent victim.

The White House issued a veto threat Tuesday morning and began putting heavy pressure on Senate Democrats in the final hours before the vote. Senate Minority Leader Harry Reid, D-Neva., who was against legal immigration before he was for protecting illegal immigration, tried to discredit the bill by dubbing it “The Donald Trump Act” on the Senate floor.

“This vile legislation might as well be called ‘The Donald Trump Act,'” Reid said. “Like the disgusting and outrageous language championed by Donald Trump, this legislation paints all immigrants as ‘criminals and rapists.'”

However, according to a recent poll, 58% want the federal government should cut off funds to cities that provide sanctuary for illegal immigrants, while just 32% disagreed and 10% said they were not sure. Further, 62% of likely voters said the Department of Justice (DOJ) should take legal action against cities that provide sanctuary for illegal immigrants. Meanwhile, 53 percent of all voters–including 76 percent of Republicans–agreed with Trump’s comments and say illegal immigration increases the level of serious crime in America.

The Obama administration claimed in a written statement that the bill “fails to offer comprehensive reforms needed to fix the Nation’s broken immigration laws and undermines current Administration efforts to remove the most dangerous convicted criminals and to work collaboratively with State and local law enforcement agencies.”

The legislation would have made it illegal for local governments to ignore immigration-related detainers — federal requests to notify them before releasing an illegal immigrant so they can take custody — and to bar local officials from sharing immigration information with federal agents.

Vice President Joe Biden Not Running for President in 2016