How Nice: Former Speaker-Turned-Felon Dennis Hastert Gets to Keep His Pension 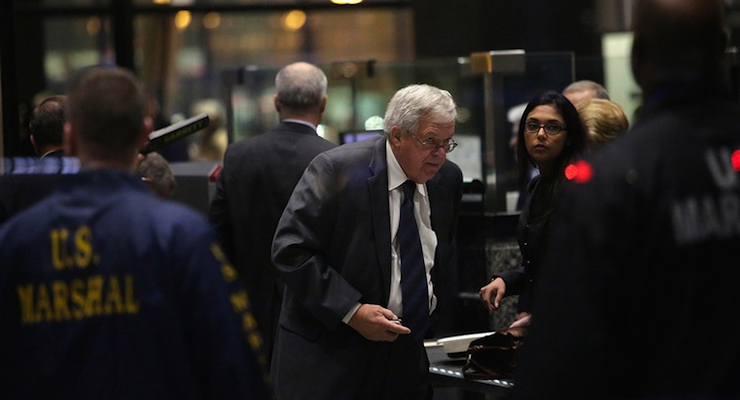 Hastert Loses Portrait, But Gets to Keep the Money

Former Republican Speaker of the House Dennis Hastert, center, arrives at the Dirksen Federal Courthouse on Oct. 28, 2015, in Chicago.

Former House Speaker-turned-felon Dennis Hastert, R-Ill., will keep his pension estimated at more than $70,000 per year despite pleading guilty to evading banking reporting rules on Oct. 8. Hastert, who was once the third most powerful man in the country and third in line for the presidency, was involved in a scheme to hide payoffs meant to keep secret decades-old sexual “misconduct.”

“He’s not going to lose his pension because the crimes that he has plead guilty to, was convicted of, in that sense were not related to his official duties,” Craig Holman, a lobbyist with Public Citizen, said in a Wednesday phone interview with Roll Call. “The main reason is the crime occurred after he left office.”

Hastert was trying to sweep sexual misconduct against the individual, who is now an adult, under the rug. The acts go back to when Hastert was a teacher and wrestling coach at Yorkville High School, according to a U.S. official who requested to speak on the condition of anonymity. However, because the hush-money scheme occurred between 2010 and 2014, which is after he left office back in 2007, the rules governing congressional pension payouts do not apply to his conviction.

“Bank officials told me if I withdrew more than $10,000,” it would have to be reported, Hastert told U.S. District Judge Thomas Durkin Wednesday at his plea hearing in Chicago federal court. “I didn’t want them to know how I intended to spend the money.”

In his plea agreement, Hastert admitted he had agreed to pay $3.5 million “in order to compensate for and keep confidential his prior misconduct against Individual A.” But after he made initial withdrawals of $50,000, he was questioned about it and then decided to work in smaller sums. While the plea agreement didn’t reveal any details about past misconduct, prosecutors said they may reveal more before Hastert’s sentencing slated for Feb. 29, 2016. He faces maximum penalties of five years in prison, $250,000 in fines, or three years of court supervision.

Meanwhile, less than one week after the plea deal, House Speaker Paul Ryan, R-Wis., ordered Hastert’s portrait to be removed from the Speaker’s Lobby and is now in an undisclosed location out of public view. Hastert served in Congress from 1987 to 2007, the last eight years as speaker.