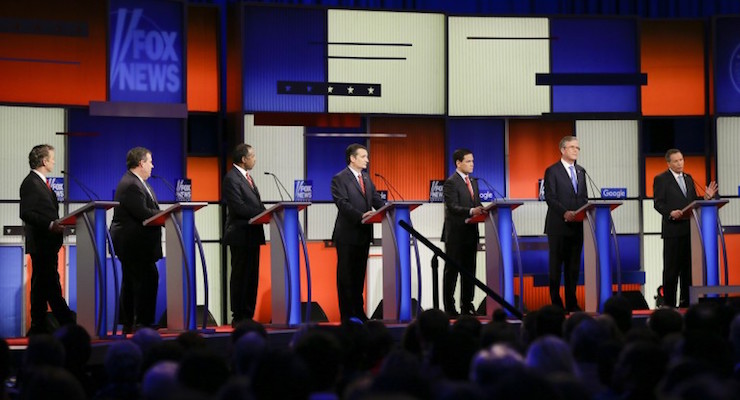 The top polling Republican presidential hopefuls, minus frontrunner Donald Trump, take the stage for the final debate before the Iowa caucus hosted by Fox News on Jan. 28, 2016.

With frontrunner Donald Trump absent from the Fox News/Google GOP debate in Iowa, Texas Sen. Ted Cruz took center stage and the heat that comes with it.

“This is the lie that Ted’s campaign is built on, and Rand touched upon it, that he’s the most conservative guy and everyone else is a RINO (Republican in Name Only),” Florida Sen. Marco Rubio said. “The truth is Ted, throughout this campaign, you’ve been willing to say and do anything in order to get votes.”

Rubio went on to point out that Cruz helped design former President George W. Bush’s immigration policy, which provided a path to legal status for those who entered the country illegally. That bill, which was opposed by the conservative wing of the party in Congress, was ultimately sabotaged by then-Sen. Barack Obama who introduced a last-minute poison pill amendment.

“Now, you want to trump Trump on immigration,” Rubio added.

Rubio’s attack was followed up immediately by another from Kentucky Sen. Rand Paul, who called Trump’s closest rival the “king” of accusing others of not really being against amnesty.

“That’s a falseness,” Paul said. “That’s an authenticity problem, that everybody he knows is not as perfect as him because we are all for amnesty. I was for legalization. So was Ted, but now he says it wasn’t so. That’s not true.”

The harsh exchanges came after Fox News’ debate moderators ran clips of both Rubio and Cruz, the latter of whom was seen in a series of clips from the 2013 immigration negotiations in the Senate making contradictory statements to the position he holds now. The clips showed Cruz backing an amendment to the Senate “Gang of Eight” immigration reform bill that provided a path to legal status.

In the footage, Cruz said that the bill would pass if his amendments were passed and, in fact, he hoped to find a middle ground to “allow for those 11 million people here illegally a legal status with citizenship off the table.”

Pointing to supporters like Sen. Jeff Sessions, R-Ala., and Iowa’s own Rep. Steve King, R-Iowa, both strong opponents of amnesty, Cruz said Rubio campaigned in Florida on the promise to fight against amnesty and then reversed course for political expediency.

“When that battle was waged, my friend Sen. Rubio chose to stand with Barack Obama, Harry Reid, and Chuck Schumer to support amnesty,” he said of the Democrats.

“I stood alongside Jeff Sessions and Steve King and we led the fight against amnesty,” he added.

But some of Cruz’s worst moments of the debate came not from the other candidates, but from himself. At one point early in the debate, he attempted to deliver a joke mocking the absence of Trump, which fell flat when the audience first took it as whining to the moderators. It was met with booing from the crowd who only mildly chuckled after the punchline became clear.

At another point, he argued over time with moderator Chris Wallace when he tried to move on to another topic and in clear violation of the rules. But when he got his chance to respond to Wallace’s question that could’ve blunted an oft-heard attack from Rubio over his record on supporting defense initiatives, he didn’t answer the charge directly. That left him open again to a rather dishonest attack from the Florida senator.

“The only budget that Ted has ever voted for was a budget that Rand Paul sponsored that brags about cutting defense spending,” Rubio said.

In fairness, Rubio has not been honest with this line of attack. While Cruz did oppose authorizing the use of force in Syria to enforce the president’s self-imposed “red line” following the chemical attacks, it was because the military operation on the table was symbolic, not strategic. Further, in the end, Cruz and Paul were right and Rubio was wrong. Had the Congress authorized President Obama take action in Syria against President Bashar al-Assad, then ISIS would more than like be ruling from Damascus, not Raqqa.

Nevertheless, how Trump’s absence from the debate plays with Iowa caucus-goers is yet to be seen. While they have been notoriously difficult to poll, as PPD outlined yesterday, more recent polls show the billionaire real estate mogul pulling away from Cruz in the closing days. Trump currently leads Cruz by 6% on the PPD aggregate average of Iowa caucus polls. Further, he has held a lead longer than other previous candidates. Turnout will tell the tale.