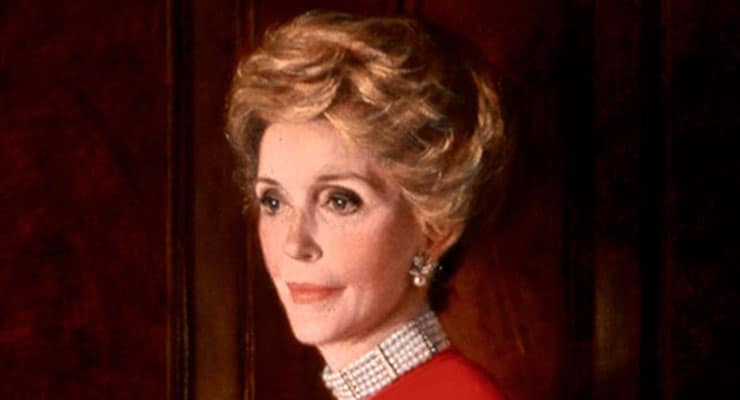 Nancy Reagan, the former first lady and widow of President Ronald Reagan, died Sunday morning of congestive heart failure at 94, according to her spokesperson. Reagan died at her home in Los Angeles and is set to be buried at the Ronald Reagan Presidential Library in Simi Valley, California, next to her husband.

There will be an opportunity for members of the public to pay their respects at the Library prior to the funeral, though the details have not yet been announced Sunday afternoon. Mrs. Reagan, suffered from several falls in recent years and, in May 2012, it was disclosed she had broken several ribs in a fall at her Los Angeles home a months and a half earlier.

Nancy Reagan began her career as an actress before becoming the former and beloved first lady.

“My life really began when I married my husband,” Nancy Reagan once said. “Thank God we found each other,” she also said in a 1998 interview. “Can’t imagine life without him.”

Ronald and Nancy Reagan were married on March 4, 1952 and remained so for 52 years before the president died in 2004. They were a close and devoted couple.

Nancy Davis Reagan was born July 6, 1921 in New York City as Anne Frances Robbins to her father Kenneth Seymour Robbins, a used car salesman, and mother Edith P. Luckett. Her mother, also an actress, divorced her father when she was young and remarried Dr. Loyal Davis, a Chicago neurosurgeon, who adopted her.

After taking took his name she attended private school in Chicago and later Smith College, where she majored in drama. Nancy Davis began her career as an actress in stage, film and television productions. In 1951, she Ronald Reagan, then president of the Screen Actors Guild. She had found her name on a newspaper list of alleged Communist sympathizers and asked him what could be done about it.

He said she’d been confused with another actress with the same name.

President Reagan’s marriage to the former first lady was his second marriage after divorcing actress Jane Wyman. The two had two children who survive her, Patricia and Ron. She also is survived by a stepson, Michael. Her stepdaughter, Maureen, who died of cancer in 2001.

“I must say acting was good training for the political life which lay ahead for us,” she said, adding “the movies were custard compared to politics.”

Ronald Reagan served as governor of California from 1967 to 1975. As the Golden State’s first lady, Nancy Reagan became a champion of the Foster Grandparent Program, which brought together senior citizens and handicapped children. Following her husband’s election to the presidency in 1980, Reagan launched a widely successful project fighting drug and alcohol abuse among young people, credited her as the mother of the “Just Say No” anti-drug slogan.

But, amid the criticism, she was a fierce defender and protector of her husband, the president. Bill O’Reilly recently released a book dubbed “Killing Reagan” that detailed this dynamic following the 1981 attempt on his life. She even consulted an astrologer about his schedule, which was revealed by former chief of staff Donald Regan in his memoir.

In 1987, the then 66-year-old first lady was diagnosed with breast cancer. After undergoing successful surgery, she raised awareness of the disease among many women and in her later memoir “My Turn,” she stressed the importance of annual mammograms.

When President Reagan retirement after two terms as president–which are still regarded as the most successful by a majority of Americans–the two left Washington for California. In 1994, the president announced he had been diagnosed with Alzheimer’s disease and Nancy Reagan spent most of her time caring for him until he died on June 5, 2004.