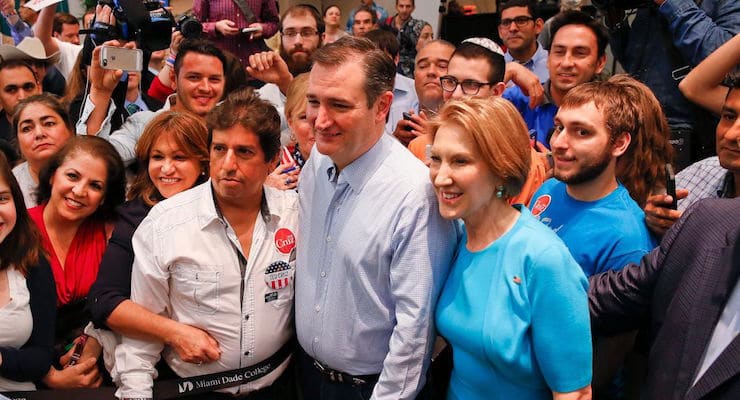 Push for Ted Cruz is Not About Electability, and It’s Not About Conservatism

On Wednesday, former Hewlitt-Packard CEO Carly Fiorina endorsed Texas Sen. Ted Cruz in what was the beginning of a reluctant coalescing by the Republican Establishment. There were only about 100 people in attendance at the event in Miami. But judging by the way the media covered the endorsement, you might think it was a 20,000-strong crowd symbolically representing an organic anti-Trump grassroots movement.

It wasn’t. But it also wasn’t surprising.

I’m not going to re-litigate Mrs. Fiorina’s record. PPD has already done so throughly and, in reality, it is about as conservative as Mitt Romney’s record. Carly Fiorina has a long Establishment history of supporting and preserving the status quo largely by opposing those who challenge it. Fiorina supported “compassionate conservative” George W. Bush, Sen. John McCain and “severely conservative” Mitt Romney.

“The truth is Donald Trump and Hillary Clinton are two sides of the same coin,” Fiorina said in her endorsement speech in Miami. “They’re not going to reform the system. They are the system.”

When asked why she supported Sen. Cruz, she responded: “They [Sen. Marco Rubio and Gov. John Kasich] don’t have a prayer to beat Donald Trump.”

The latter statement isn’t at all a ringing endorsement of Sen. Cruz. However, the former statement is far more important and begging of a simple question.

If it was true that Mr. Trump is “the system,” then why is “the system” trying to take him down? Use your heads. There is a difference between operating within a system and believing in or supporting that system. If global elites, to include those in the Republican Party, were confident a President Trump would maintain that status quo, they wouldn’t be mobilizing donors, spending millions of their own money and holding secret meetings to discuss strategy on how best to spend those dollars.

The Bushes epitomize the system and, frankly, Fiorina isn’t the only one with long and strong ties to the dynastic order.

Sen. Cruz, after using the Bush family to carry the Maine Republican caucus (yet another story completely ignored), has now brought in Neil Bush and courted the endorsement of former Florida Gov. Jeb Bush. Don’t be surprised when Jeb!, who is still mad at his former protege, comes out in support of Mr. Cruz.

So, to include South Carolina Sen. Linsey Graham, the rest of the elitists in the Republican Establishment are now getting behind their new anti-Trump warrior. It’s not that Sen. Cruz is beloved, he’s just the last man standing.

The reason the Republican Establishment and globalist elites are racing to Sen. Ted Cruz is simple and two-fold. It’s not about electability or defending conservatism because, despite what the D.C. power-brokers claim, they’re more afraid of Mr. Trump winning then they are Sen. Cruz losing. Whether Sen. Cruz wins or loses, they still win.

Even if Cruz Loses, the Establishment Wins

If Sen. Cruz wins the nomination, he has little chance of winning in November. With President Barack Obama’s approval rating teetering above the historical average needed to prevent the third-party itch, Sen. Cruz, who has already demonstrated very limited appeal demographically in the primaries, will struggle to get above 47%.

Now, I’m sure Cruz supporters reading this will object to this assertion. However, until you spend 23 out of 24 hours combing through the demographics in each county, comparing them to the last 50 years of popular presidential election data, estimating participation rates and actual voting behavior this cycle, spare me your expertise.

Those of us who are honest and have been doing this long enough know that the talk about Donald Trump losing to Mrs. Clinton in head-to-head polling is just that–talk. That goes for any candidate. Pre-Labor Day polls on the presidential level have zero, zero predictive value unless they are lopsided some 20 to 1. All that is predictive at this point in the cycle are the trends identifying demographic appeal.

To that end, judging by the actual vote, none of the other Republican candidates come close to demonstrating the level of appeal necessary to win or exploit the electoral map in November than Donald J. Trump–period. But this isn’t an endorsement of Mr. Trump, it’s an indictment on the preservers of the status quo and, to a lesser extent, the beginning of an “I told you so” moment for and regarding Sen. Cruz.

Which brings me to my point. The Republican Establishment, which agrees with the Democratic Party on trade, immigration and foreign policy, would love to lose with Sen. Cruz. Then, they would revel in telling the base of the party, whom they’re ashamed of, they were right all along to embrace amnesty, neoconservatism and economic globalism. In fact, the Republican National Committee’s own polling shows that with Sen. Cruz at the top of the ticket, they do worse in down-ballot Senate and House races than with Mr. Trump at the top.

Haven’t heard about that on Fox News, have you? Of course not. But it’s 100% the truth.

Whether our readers who support Sen. Cruz like it or not, we will always tell you the truth. The same is true for those who support Mr. Trump. While it’s true that some of Mr. Trump’s positions are more conservative than his rivals, particularly on immigration, it is also true that he is not really a conservative in the traditional sense. Mr. Trump is an economic populist, an American nationalist and, by talking with those who know him, he has been for quite a long time. He also truly does view himself to be a “common sense conservative,” but for practical rather than philosophical reasons.

Cruz is Globalist-lite, But a Globalist Nonetheless

Sen. Cruz has always been at least a wanna-be member of the globalist order in the Republican Party. Talking with insiders on Capitol Hill, it quickly becomes clear that one of the main reasons his fellow-lawmakers in D.C. couldn’t stand him and opposed his candidacy prior to the rise of their mutual enemy is because they know that. They don’t view him to be a principled purist as he’s painted in the media. Too many of them have watched him come up under and, work hard to promote, Bushism.

They view him to be what he really, truly is at his core–an opportunist. Nothing more, nothing less.

From 1999 to 2003, Sen. Cruz worked as the director of the Office of Policy Planning at the Federal Trade Commission. Heidi Cruz served in Bush’s neocon White House under Secretary Condoleezza Rice as the Economic Director for the Western Hemisphere at the National Security Council, the Director of the Latin America Office at the U.S. Treasury Department, and as Special Assistant to Ambassador Robert B. Zoellick, U.S. Trade Representative.

Prior to her government service, Mrs. Cruz was an investment banker with J.P. Morgan in New York City. In 2012, when he was running for U.S. Senate and attended a Straw Poll in Texas, Sen. Cruz was asked about his wife’s role and connection with the Council on Foreign Relations.

He deflected and cited former U.N. Ambassador John Bolton as one of the conservatives, along with his wife of course, who only participate to move the council in a more conservative direction. To those who say an attack on his wife is unfair, we say the senator had a chance to show daylight between them as individuals, and he blew it. When given the chance, he supported TPP in the Senate and only now modified his position to compete with Mr. Trump, who has thus far carried all the states that Sen. Cruz built his entire campaign strategy around.

Further, Mr. Bolton is a neoconservative, not a conservative, and the CFA agenda is a globalist agenda. The CFA, whose members along with Karl Rove have been meeting in secret to plot the takedown of the Republican frontrunner, embodies the post-World War II internationalist order. In other words, they subscribe to the worldview that exporting U.S. wealth and industry will ultimately make the world a more prosperous and safer place.

Behind the scenes there is a battle taking place in the Republican Party. The battle is between those who support a continuation of the globalist status quo and those who say it’s time to move the party in a different direction. Former Alaska Gov. Sarah Palin, Alabama Sen. Jeff Sessions and Pastor Robert Jeffress, all are prominent conservative figures who supported Sen. Cruz in the past and now support Mr. Trump.

They chose national populism over globalism. The Republican Establishment will always choose the latter. Voters will have to make that same choice, too.