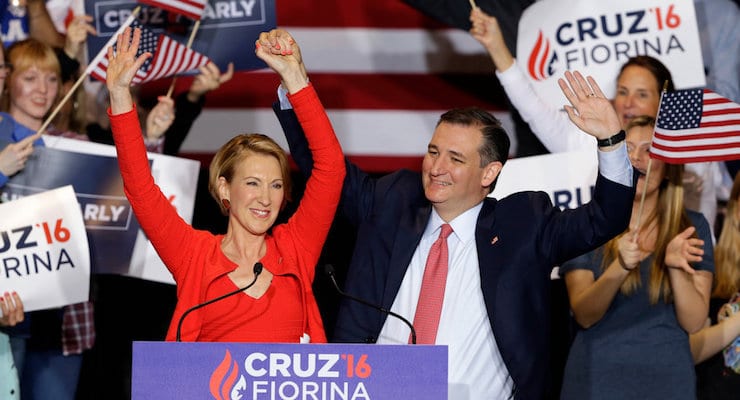 Desperate to blunt Donald Trump’s momentum, Texas Sen. Ted Cruz announced Wednesday if he wins the nomination Carly Fiorina would be his vice presidential nominee. Sen. Cruz is hoping to alter the course of the race after suffering overwhelming defeats in the prior six contests and with less than one week before the make-or-break Indiana Republican Primary on Tuesday May 3.

Sen. Cruz, speaking to a small but rowdy crowd in Indiana described Mrs. Fiorina, the former CEO of Hewlett-Packard and presidential candidate, as “brilliant and capable,” He also said she was deeply principled and “shattered glass ceilings.”

Mrs. Fiorina sang a song to Mr. Cruz’s daughters on stage before repeating the oft-cited attack by the Cruz campaign argument on both Mr. Trump and Mrs. Clinton.

“They’re not going to challenge the system,” she said. “They are the system.”

Sen. Cruz’s announcement comes with the hope of distracting from rather politically harmful revelations. Ohio Gov. John Kasich and Sen. Cruz made public this week a collaboration to deny Mr. Trump the 1,237 delegates needed to secure the nomination.

It also marks the first time ever in U.S. presidential politics that a mathematically eliminated candidate named a vice presidential pick. In his 1976 primary challenge against President Gerald R. Ford, Ronald Reagan–behind in the delegate count and polls, also desperately needing a change–announced his choice of a running mate before the Republican convention. However, he was not yet mathematically incapable of reaching the delegate goal.

Nevertheless, even if Mr. Trump loses in The Hoosier State his larger-than-anticipated wins in the prior six contests have made it more than possible to secure the magic number. Following his margin in Pennsylvania, the New York businessman has already secured 39 of the 54 unbound delegates. While it provided him much-needed cushion, a Cruz win in Indiana could help to shift the narrative.

However, Sen. Cruz currently trails Mr. Trump on the PPD average by more than six points, outside the collective margin of error. The latest [content_tooltip id=”37989″ title=”FOX Poll”] conducted prior to Trump’s big wins found him leading Sen. Cruz by 8 points. In truth, Sen. Cruz’s internal polling in Indiana had him down double-digits in Indiana last week, but the campaign claims he has edged closer to Mr. Trump in nightly surveys this week.

“If the election were held today, we’d lose but not get crushed,” a source familiar with Mr. Cruz’s polling data admitted. Worth noting, the survey data cited was all taken before Mr. Trump trounced his rivals in a five-state sweep on Tuesday. Sen. Cruz on Monday trailed Mr. Trump by almost 10 points, according to the survey data.

Still, the campaign insists Mrs. Fiorina is good for a few points at the polls, something Republican insiders dispute. But the choice may have more to do with Mrs. Fiorina’s past clashes with Mr. Trump, representing a last-ditch effort to bait him into statements that could cause him women votes. Critical of her business record, Mr. Trump has also commented on her personal appearance.

“Look at that face,” Mr. Trump said in an interview with Rolling Stone magazine last summer. “Would anyone vote for that?”

Of course, that line of attack against Mr. Trump, which was brought to the forefront in the second Republican debate, failed to gain traction in the primary. Mrs. Fiorina dropped out of the race after New Hampshire. As far as Mrs. Fiorina, advisers to Mr. Trump say he has long-thought of her as an agitator and an unworthy opponent with questionable business record. HP cut tens of thousands of jobs under the stewardship of Mrs. Fiorina and made controversial, arguably foolish acquisitions.

There is little doubt that delegate-rich California, which holds its primary on June 7, factored into Sen. Cruz’s decision-making process. The contest, if Mr. Trump loses Indiana, could determine whether he reaches the delegates needed to clinch the nomination before the convention. Still, even though Mrs. Fiorina has statewide name recognition, having been part of the Republican Establishment in the state and party nominee for U.S. Senate against Sen. Barbara Boxer in 2010, she lost the state by 10 points.

Not only has she since left the state to live in the Virginia suburbs of Washington, but left on a sour note with party activists and the voting base. While Mrs. Fiorina ran as a political outsider and made her very debatable career at HP a centerpiece of her campaign, in reality, Chuck DeVore was the grassroots outsider with all the big-name conservative support. She defeated DeVore and former Rep. Tom Campbell by playing the gender card on the former and accusing (unjustly) the latter of being anti-Semitic (oh, and a demon-sheep, no kidding).

Meanwhile, the Republican frontrunner campaigned with famed and still-widely popular former Hoosier State head coach Bobby Knight, sensing an opportunity to put an end to Sen. Cruz’s campaign. A victory in Indiana on Tuesday would almost certainly put the last nail in the #NeverTrump coffin. Mr. Trump dismissed the announcement by tweeting out a video of Mrs. Fiorina, who once had a very different take on Sen. Cruz.

Trump: "We Will No Longer Surrender This Country to the False Song of Globalism"

Trump: Pence Made "Weakest Endorsement" of Ted Cruz "Anyone Has Seen"