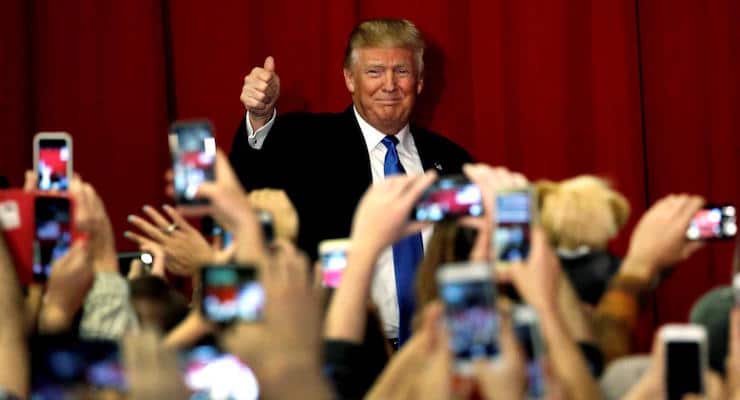 Republican presidential candidate Donald Trump greets supporters as he arrives to appear with New Jersey Governor Chris Christie at a fundraising event in Lawrenceville, N.J. on May 19, 2016. (Photo: Reuters)

Presumptive Republican nominee Donald Trump vowed during his “America First” victory speech Tuesday night that he was “going to be America’s champion.”

Speaking at Briarcliff Manor in Westerchester New York, Mr. Trump ripped the now-presumptive nominee Hillary Clinton and the globalist agenda she, her party and many in his own party have supported for years. That agenda has been repudiated this election cycle in favor of national populism on both sides of the aisle and, judging by his speech, he intends to capitalize on it.

Mr. Trump went on to clobber the Clintons for making millions during and as a result of their careers in public service. He announced he will give a major speech next week informing the American public on the family track record, insinuating he had something new to add to what many politicos know to be a very old story with the Clintons.

“I wonder if the press will want to attend,” he joked. “Hillary Clinton turned the State Department into her private hedge fund… We’re going to turn this all around and we’re going to do it by putting America first.”

He vowed under a Trump presidency the U.S. will never enter into foreign conflicts that are not in the vital security interests of the United States

“Every American worker is entitled to the same rights and privileges.”

While he was essentially running unopposed, Mr. Trump racked up large margins in the final voting states on Tuesday and outperformed public polling where available, putting him well-above the needed 1,237 delegates to clinch the Republican nomination.

Sanders on Clinton Foundation: "I Have a Problem" Taking Money From Dictators